Talking to the animals

In the hills outside of Adelaide is a wildlife park called Cleland Wildlife Park. Nearly 20 years ago, the first time we were in Adelaide, our friend who lives there had taken us there as part of the grand tour of the town that she gave us. We thought after 20 years it was time to go back. The park is a very peaceful place, and walking around the park itself is a pleasure, as the animals aren't in cages at all but in their native habitats. There are woodsy areas, open fields and marshes and ponds. 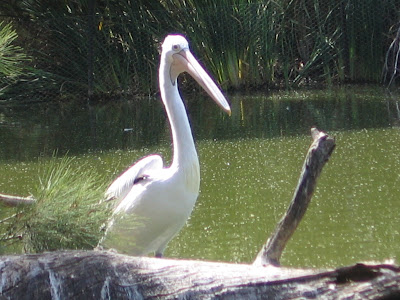 The kangaroos are so tame they will eat out of your hand. The females are usually more active, wandering around grazing on the brownish grass, often with a "joey" in their pouches. Unlike the stereotypical image of Mama Kangaroo with the head of the little one sticking out of the pouch, in reality a more common picture is the Mama Kangaroo with the feet of the joey sticking out. This is because the little one is busy suckling inside the pouch, head first.

Sometimes you will see a Mama with more than one joey - the bigger one trying to poke his or her head in while the little one is still inside. Interestingly, I saw on a nature program that in times of drought, the kangaroo mother is able to put a developing embryo in her pouch "on hold" at a certain stage of development until the weather conditions are more conducive to survival. Here is an article explaining a bit more about how the kangaroos cope with adverse conditions. 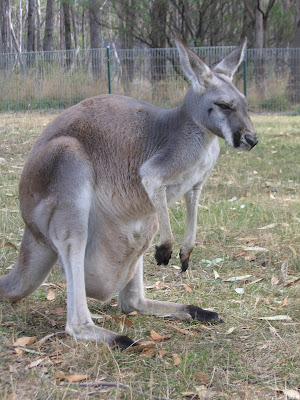 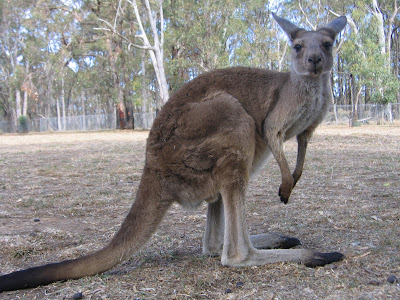 The males are bigger than the females and tend to lounge around. They have bigger upper arms and are bigger all over than their ladies. There is something almost human in the way the males lie around on their sides on one elbow, for all the world as if they are lying on the couch with the remote in their hands watching "footie" on the television. 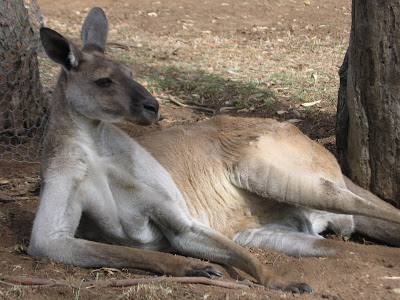 Aside from the obviously dangerous creatures such as poisonous lizards and snakes, only the Tasmanian Devil and the dingoes are behind any kind of enclosure, since the Devil can bite and the dingoes are probably an escape risk; or perhaps would eat the other wildlife. The dingoes certainly were not in the least bit threatening - they are basically cute, perky, foxlike dogs, not particularly large or imposing, and were happy to eat some kibble out of my hand. 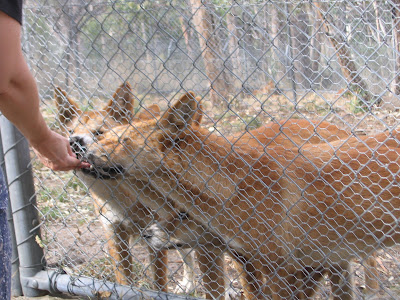 Since the Devil is a nocturnal creature, I've never actually seen one awake. The closest to seeing one awake that I ever came was at the Sydney Zoo about 10 years ago when I saw one yawn, exhibiting an admittedly formidable set of teeth. However, overall the Devil is a small black beast with big pink ears and is not particularly scary-looking when it is sleeping! 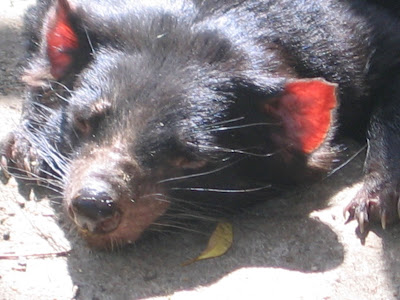 Email ThisBlogThis!Share to TwitterShare to FacebookShare to Pinterest
Labels: vacation

What a wonderful set of photos. The thought of having Kangeroos & Dingos eating out of your hand is so exciting. I'm so glad you're having such a good time.
Rx

Thanks for taking me down memory lane. We have friends living there and have travelled in Oz lots. Been 4 times and spent wonderful months just pootling around in the car.

Been to the wildlife park to and the zoo and the botannical gardens, you name it we visited it.

So nice to 'go back' there again - alas we no longer can visit in reality.

Because there is no 'other' user, my sign in below will show my old blogspot - but you can use the link above or follow the link on the old blog to find me.

Had a wonderful time on here, I will return.