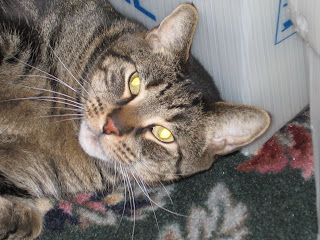 Baxter here. I am So Embarrassed.  My Female Human has added a "Donate" button to the sidebar of My Blog. (Yes, I know technically it is Her Blog, but I consider Myself the Key Contributor. Everyone always praises My Posts most Highly).

My Human explained to Me that her Unemployment is running out and she has No Desire to go Back to the Corporate World to make Real Money. It would involve her getting Dressed, and leaving the House at the same time Every Day. And maybe even buying New Clothes. And let's face it, she HAS been applying to Numerous Jobs that might have paid at least a Decent Amount, and No One wants her! People, she is No Spring Chicken. They don't want Old People like her.

So, in Addition to doing Proofreading and other paying tasks at Home, she will Depend on the Kindness of Strangers. Yes, Strangers. She doesn't want to make her Friends or Fellow Struggling Bloggers feel they should send any Money; she is Hoping Random Strange People may stop by and suddenly feel Generous. As the saying goes, You Never Know.

But as a Cat, I find it Humiliating to be putting that Button out there. We Cats are Very Independent. Plus we can catch Mice to live. (True, I have never actually caught a Mouse, but it could Happen.)

Now mind you, if my Human doesn't start Blogging more often and with Greater Effort, No One will ever donate to her Blog. So I suggest she let Me on here MUCH more often so something can Get Done from time to time. Personally, I consider this an Experiment. If it doesn't add anything to Life then the Button will be gone! I will make sure of it!

So...here I am. What a Mess this Republican primary process is in! Mitt Romney was supposed to be the Front-Runner. But now he is falling Behind! According to Gallup, Romney is actually trailing Santorum on a National Basis.Who'd 'a thunk it?

Well, he hasn't exactly endeared Himself to his home state of Michigan. A couple of years ago he wrote in an Op-Ed article in the NY Times that the US Government shouldn't Bail Out American Auto Companies. And worse yet, he titled it Let Detroit Go Bankrupt.

OK, you may Say, but that was two years ago, maybe he Changed his Mind since then? Nope. Ten days ago he wrote another op-ed, this time in The Detroit News, calling the Bailouts "Crony Capitalism." He Castigated President Obama for not Standing Up to the Unions. Of course, lots of people in the Michigan area are part of Unions. Somehow, this does not seem like a Wise Policy to have when you are trying to Win a Primary in Michigan.

It also doesn't Help that Romney keeps talking about how Rich he is. Like yesterday, at that Debacle of a Speech in the Huge Stadium with Hardly Anyone There, he referred to the fact that his wife and he own 4, count 'em, 4, Cars -- including two Cadillacs. While this Alone should not be a Big Problem, it is just one of a Long Line of Remarks Romney has made that show he is Out of Touch with Average Americans, who can't afford four Cars and two Homes as the Romneys do. The Michigan Primary will be held on Tuesday, Feb. 28, so We Shall See What Happens. According to two New Polls, Romney is now Ahead of Santorum in Michigan.

As a Cat, I really don't Like either of the Leading Candidates. And even though I am No Fan of Dogs, it does Rub my Fur the Wrong Way to think about Romney putting his Dog in a carrier on Top of his Station Wagon for a 12-hour Drive from Massachusetts to Canada. And apparently there is even More to It than I had Heard. The Dog got, um, the Runs, while in the Container and they stopped and Romney Hosed him and the Crate Down before Heading Back onto the Road.

There are even Stories that, unlike What We Have Been Told about Seamus the Dog living to a Ripe Old Age, actually he Took Off when they reached Canada and was never seen again! More here! The incident will Not Go Away, and has Spawned a Whole Bunch of Groups, led by Dogs Against Romney, founded in 2007. On Facebook their site is the largest, but not the Only One.

In the Meantime, Santorum has been, as they say, Surging, and I am Tired of the Man already. I am not going to Get Into the whole War On Women's Bodies thing that is Going On in the GOP these days. I'll leave that to my Female Human, who has a Lot More at Stake in this than I do.

So that's my Take on Things for Today. I'll be back Very Soon. In the meantime, take the Time to Sniff the Catnip and don't let this Political Stuff ruin your Day. I know I never let it ruin Mine!
Posted by Mauigirl at 2/25/2012 02:57:00 PM 9 comments:

Rain is falling down
Both of the dogs are snoring
It's very peaceful.

I'm reading the blogs
Skipping over to Facebook
And then back again.

The house is a mess
The dogs were chewing rope toys
Now shredded to bits.

Soon I must arise
Go clean up the living room
And do some dishes.

Then I must go out
Venture forth into the rain
And visit my aunt.

But for now, I think
I'll just sit here reading blogs
And listen to jazz...

Well, just when I think things are going to settle down and be peaceful, something else happens. My 91-year-old aunt fell and broke her hip a few days ago. Now she's in the hospital and will need to go into rehab. Luckily she made it through the surgery to put the pin in her leg with flying colors - they used a spinal instead of general anesthesia and she did great. She is doing well and they think she will be able to walk fine once she finishes rehabilitation.

Of course that is not my only excuse for not posting for awhile. We actually managed to go up to the cabin in the Adirondacks last weekend for four days. The weather up there has been as unseasonably mild as it has been down in New Jersey. So we figured, why not go up? There was no snow on the ground whatsoever, very unusual for that area in February.

However, our gravel "road" (if you can dignify it with that description) was covered in a sheet of ice. All moisture tends to gather on the road and flow down the hill, whether from melting snow or from rain. However, our Jeep Rubicon lived up to its reputation. We were able to get up that hill by running the Jeep along the side of the road where the leaves were, rather than on the slick ice. We just had to put it in 4-wheel-drive, "low low" (an extra low gear just for this model) AND lock the axles. Not a problem! It was a relaxing weekend and I have to admit I did not get on the computer much at all.

So, in the meantime, the politics of the GOP nomination continue to be volatile! Just when you thought Gingrich had subsided and things might be smoothing out for Romney, Santorum goes and wins in caucuses in Minnesota and Colorado, and in a "non-binding" primary in Missouri. As a result, new money has poured into his campaign. It's like that old whack-a-mole game. You get one of them and another one pops up!

It is obvious that many GOP primary-goers just don't like Mitt. They try but they just can't do it. What scares me is that Santorum represents the most right-wing, theocratic side of the GOP, and any votes that put him anywhere near being a possible nominee for the Republicans is a very scary thought.

Think it can't happen? The "personhood" amendments being pushed by Republicans would do just that, if they ever passed. Many forms of birth control would be considered ending the life of a "person." Even Mississippi voted that idea down. But it keeps popping up again in other states. According to Personhood USA, activists are trying to get personhood measures on the ballot in at least 12 states in November 2012!

"For now, it’s unclear how many of the personhood proposals will actually go before voters later this year. Authorities have given the green light to gather signatures for proposed ballot measures in Colorado, Ohio, Montana and California, while legislators in Kansas, Virginia, Oklahoma, Wisconsin, Alabama and Georgia have been working on bills that could lead to personhood referendums.

In Nevada and Arkansas, personhood campaigns also are in place, but have been slowed by disputes over the wording of proposed ballot measures. In Florida, anti-abortion activists are gearing up to seek a referendum in 2014."

Whatever else you want to say about Election Year 2012, it isn't dull; and it isn't inconsequential. There are HUGE issues at stake in this election, especially if by some chance Romney doesn't get the nomination. Anyone who wonders whether there is that much of a difference between the Republicans and the Democrats, between Romney and Obama, had better look hard at the issues that matter to them.

Maybe President Obama hasn't been the most liberal Democrat ever elected; but he is certainly way more "liberal" than anything the GOP will come up with, even Romney. Keep that in mind when thinking about things like Supreme Court appointments, the environment, reproductive rights, civil rights, and more.