Can Democrats Manage Not to Lose Again to Trump? 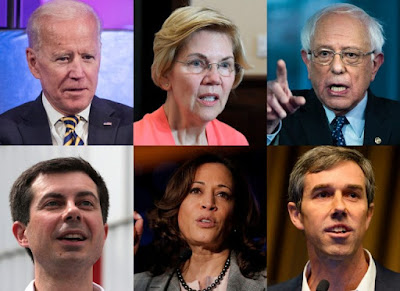 Well, here we are. It's a year and a half before the 2020 elections and there is a bumper crop of Democrats running for President, and more may be coming. Those leading the pack so far are Joe Biden, Bernie Sanders, Beto O'Rourke, Elizabeth Warren, Pete Buttigieg (yes, no one heard of him until this year) and Kamala Harris.

Others seem to be struggling to get traction, with media focusing on each "shiny new object" (to quote a Facebook friend of mine) as they announce their candidacies. The latest rumor is that NY Mayor Bill DiBlasio may throw his hat into the ring, a bad idea in my opinion, given he isn't even popular in his own city.

Last time we didn't have enough choice. This time we may have too much. But it's a better position to be in, since we have plenty of time for the field to thin out before things get really serious, and it gives us a much more robust field of qualified candidates.

In early polling, among the top 5 Democratic candidates, all but Warren would handily beat Trump in the general election if it were held today.  But of course, we are a year and a half out, and we know how that can change.

But the bigger question is, will Democrats show up at the polls if their favored candidate does not become the eventual nominee? Early indications are this could be a problem, especially if that nominee is not Bernie Sanders.

While I know that posts on Facebook and other social media are not representative of votes, my impression from Facebook and Twitter is that so far, Sanders fans are least likely to say they'll "vote Blue no matter who" in the general election. Are we heading into yet another debacle if Bernie doesn't get the nomination? Will Democratic/Progressive voters split again and give Trump the presidency for a second term?

I'm seeing more and more posts lately with Bernie supporters claiming the early polls are "rigged" against their candidate and favoring Joe Biden. The most recent issue that came up was the CNN poll that came out after Biden announced his candidacy.

The poll, which was conducted by CNN by research firm SSRS, was a pretty ordinary poll, conducted among a little over 1000 adults (913 voters), balanced by political stance, demography and geography, and weighted to make up for any undercounted groups. Respondents with both landlines and cell phones were included. In fact, more cell phone users were included than landlines, no doubt reflecting overall trends.

Subsets of respondents were broken out in the crosstabs. But they did not break out results for any group that had less than 125 raw respondents because small sample sizes may not be projectable to the group's size in the population.

This led to a number of very misleading articles and posts about the validity of the survey.

Bernie fans posted a Youtube video of the Jimmy Dore Show on a pro-Bernie Facebook page I follow, where Dore (who admits he is no expert) misinterpreted the results of the CNN poll, saying the pollsters "left out" everyone under 50 and those making less than $50k annually. Then later in the video he casually says "or didn't poll enough of them or something." He made it sound as if they purposely didn't include enough in order to skew the results.

Others posted the actual cross-tabs showing the N/As among the younger respondents, again misinterpreting the data to say it indicated they weren't polling Bernie's base, which of course is absurd.

They also post "polls" from Progressive sites like Daily Kos or Democracy for America which are just surveys of their OWN members - not balanced or weighted or in any way statistically valid - as "proof" that the mainstream polls are biased, since Bernie blows all the others away on those sites.

It is especially irritating to see this misinformation (dare I call it "fake news"? Yes, I do) being posted as truth, especially since all major polls showed the same results that were consistent with the CNN poll, with Bernie behind Biden.

Look, I get it. You want to believe your guy is really winning. And I'm not necessarily a Biden supporter. Like Hillary, he has a whole bunch of baggage and may not inspire younger people to vote. But he would bring in some of the lost voters from the states Hillary lost, such as Pennsylvania and Michigan. I would prefer a younger candidate than either him or Bernie - it is time to "pass the torch" to a new generation. But of course I will vote for WHOEVER wins the nomination.

Once again the media is going to play a big part. We're already seeing a lot of emphasis in the media on the white male candidates (incuding Beto and Buttigieg) vs. all the very qualified women who are running. Given the importance of Democratic women voters, and particularly, women of color, in the 2018 elections, it is concerning that the women aren't getting as much airplay and press as the men.

And of course, let's not forget about Russia stirring the pot, voter suppression and gerrymandering. While a couple of states' gerrymandering issues may make it to the Supreme Court, I am not sanguine that the Court will rule that their gerrymandered maps are unconstitutional, now that Kavanaugh is on the court.

But in the meantime, I wish the Bernie supporters would be team players. Instead of trashing the other Democratic candidates, they should just push positive information about Bernie. Maybe doubting Thomases like myself would be more pro-Bernie if we didn't feel such hostility from his fans and feel as if THEY are shoving him down our throats.

They need to stop anticipating or assuming that the "mainstream media" and the "corporate Democrats" are going to push Biden and spurn Bernie. It never seems to occur to them that not everybody loves Bernie. I know I don't. I like some of his ideas and I am pretty liberal. But I'm also practical and don't see how he can get his ideas through a recalcitrant Congress (it is unlikely the Democrats will regain the Senate, absent some miracle - or a very motivated Democratic electorate).

Bernie's fans complaining about the Democratic establishment and continuing to relitigate 2016 and the DNC debacle is not going to get him nominated by the overall Democratic electorate. Not everyone is ultra-progressive and not all will support Bernie. But any Democrat would have better policies than Trump.

I think Bernie would have trouble being elected in the general election vs. Trump despite current polls. Trump will ream him out about his "socialism" if he is actually nominated. He'll be Crazy Bernie this or that. And he won't get the kid glove treatment he got in 2016 from the GOP in general. They were fine with him challenging Hillary because of how much they hated her. But if Bernie is the nominee that would change abruptly, in my opinion.

Do Bernie supporters really think that all Democrats are "just as bad" as Trump? If so they are sadly deluded. What about climate change? The environment? LGBTQ rights? Women's rights and health? There are CLEAR differences.

No candidate is going to be perfect. But we can't afford purity in 2020. Too much is at stake. Those who insist on that purity are insisting from a position of privilege; it is not their rights or lives being marginalized by Trump. It's easy to be righteous and pure if you have nothing to lose by not voting, or voting third party.

Sadly, I am seeing a lot of Bernie supporters saying yet again that if he doesn't get the nomination, they will refuse to vote for whichever Democrat gets it. (Not all, of course. I know many who voted for Bernie in the primaries in 2016 but voted for Hillary in the general election).

But there is a substantial subset that is dead set on repeating the mistakes of 2016. Here are some examples from a Progressive/pro-Bernie Facebook page I follow:

"I refused to vote last time. I just COULD NOT vote the lesser of two evils. I WILL NOT fall in line this time either. I will fucking revolt."

"I will NOT Vote.. if Bernie is not the nominee. Period. The other oligarchs aren't going to rectify much of anything. And.. I would work to grow the MovementforPeoplesParty. End of story."