Here we are, just one year after Barack Obama was inaugurated, and the Democrats have made a mess of things. While there have been many accomplishments since the President took office (as I mentioned in my previous post) the Democrats in general, as a group, don't seem to know how to run things once they're in charge.

The latest example of their ineptitude is Massachusetts. They took Senator Edward Kennedy's vacant seat for granted, ran a less-than-stellar candidate who went on vacation during a large chunk of the latter part of the race, and didn't get worried about the race until it was too late.

Now, the magic 60-vote filibuster-proof Democratic majority in the Senate is gone, and the health care bill is in peril.

TomCat over at Politics Plus has a great summary of what happened and why, and what the Democrats will need to do to pull their chestnuts from the fire.

As he points out, the problem is bigger than just Massachusetts and just the health care bill:

"When Barack Obama campaigned for President, he promised 'bipartisanship' and 'change we can believe in'. Readers of the previous incarnation of this blog will remember that I repeatedly said that the two are mutually exclusive. One cannot effect change while attempting bipartisanship with an entity that refuses to compromise on anything. Obama had a choice. He could choose bipartisanship or change, but he tried to have both. The result was “business as usual”, not “change we can believe in”. Now I’m not saying that Obama accomplished nothing. He accomplished quite a lot. But his attempts at bipartisanship foiled the major items on his agenda."

Although I'm not a fan of Peggy Noonan, she has summed up the President's problems pretty well in her recent column. Basically she says that President Obama has misread the mood of the country and is not listening to people's biggest concerns.

"There is a disconnect, a detachment, a distance between the president's preoccupations and the concerns of his people. There's a disconnect between his policy proposals and Americans' sense, as expressed in polls, of what the immediate problems are."

At a time when the economy and job losses are paramount in people's minds, the Democrats have gone full tilt toward health care reform, which is kind of esoteric to most people. They want a concrete feeling of security, that jobs are coming back, that the economy is on track and all is well so they can start buying things again without feeling nervous about it.

While President Obama has stabilized the economy, he isn't getting credit for it, since he isn't talking about it as much as he's been talking about health care. And many people are still out of work and unemployment is still high. As the sign on the wall during Bill Clinton's presidential campaign used to say, "It's the Economy, Stupid!"

The President can still help salvage the midterm elections if he is able to focus on the economy, make people feel as if he is on their side, and prove he is listening to them.

Congress, in the meantime, will need to be working to save the health care reform legislation now that they don't have 60 votes. It is crucial that they accomplish something - even if they have to scale it back. (In fact, that might be an improvement - get some reforms in without the baggage and earmarks that were added to the bill to get the 60 votes).

Because if it doesn't pass this will be a huge setback for the Democrats and a rallying point for Republicans in the fall.

Of course, if it does pass and is unpopular, the Republicans will use it as a rallying point in the fall.

Democrats, as usual, are between a rock and a hard place - and as usual will probably be allowing the Republicans to define them to the American people.

January is always a difficult time for me. I tend to suffer from Seasonal Affective Disorder, and even though the hours of daylight are actually increasing now, the cold weather makes me glum and I just want to hibernate. In fact, the colder it gets, the earlier I go to bed. We went to bed before 9 p.m. three times last week! I just want to be cozy and warm and in my bed and doing nothing but watch TV.

So then I started thinking about more recent times and still felt glum. In fact, I read Bob Herbert's column last Monday and felt as if he kind of summed up what I was feeling, that a big opportunity was passing us by, that things weren't going the way I had expected. In fact, I felt a sense that the new decade was going to be much like the old decade. It didn't give me a lot of hope for the future. Here is the gloomy ending of Bob's column:

"If America can’t change, then the current state of decline is bound to continue. You can’t have a healthy economy with so many millions of people out of work, and there is no plan now that would result in the creation of millions of new jobs any time soon.

Voters were primed at the beginning of the Obama administration for fundamental changes that would have altered the trajectory of American life for the better. Politicians of all stripes, many of them catering to the nation’s moneyed interests, fouled that up to a fare-thee-well.

Now we’re escalating in Afghanistan, falling back into panic mode over an attempted act of terror and squandering a golden opportunity to build a better society."

"Ah yes," I thought to myself. "Exactly how I feel. No wonder I'm depressed about the future!"

I was also quite disheartened by the New Jersey Legislature rejecting the proposed gay marriage bill last week.

But, all is not lost. There are actually good things happening, it's just that no one, particularly the GOP and their mouthpieces (such as Bill O'Reilly, Rush Limbaugh and now, horror of horrors, Sarah Palin on Fox) wants you to know about them. The media doesn't cover the good things that have happened; that's bad for ratings.

So I was most heartened to read Annette's post over at Just My Little Piece of the World which points out that actually, Obama has been even more successful than LBJ in getting his agenda passed in Congress. Referring to LBJ's accomplishments, she says:

"Even so, it was still hard for him to get Medicare and Civil Rights legislation through Congress and the bills he got through, were not the bills we have now. They have been added to many times to make them what they are today.

That's the way all big Omnibus Legislation is done. That's the way this Health Care Bill is going to be. No, it isn't what we all wanted, no it isn't everything it maybe could be.. But the President, Harry Reid and Nancy Pelosi have to work with the members they have to pass what they can."

I couldn't agree more. I know many chafe at President Obama's practicality, but there was no one more practical than LBJ and he knew how things had to be done in Washington. He was castigated for his escalation of the Vietnam War, but no one could deny that he accomplished a great deal in the areas of health care and civil rights and that without his leadership on these issues, we would be even further behind in these areas.

Sherry from After the Bridge posted a great link on Facebook that also gave me encouragement. Listen to Rachel Maddow point out all of the President's accomplishments to date. She does also hold him accountable for not closing Guantanamo or ending "Don't Ask Don't Tell," but she gives credit where credit is due - and a lot is due. (You have to get through a short bit with Sarah Palin in the beginning but hang in there, Rachel will get to the accomplishments after that).

Visit msnbc.com for breaking news, world news, and news about the economy

Among the accomplishments she cites:
- Taxpayers actually MADE MONEY on the stimulus package - $52 billion in profit!
- Because of his actions we have NOT had a second Great Depression.
- Obama signed the Lilly Ledbetter Act for fair pay.
- He appointed the first Hispanic woman to the Supreme Court.

Job losses actually are heading in the right direction compared to the last two years of the Bush administration. Rachel shows a similar chart to this one. As you can see, job losses have been lessening since just after President Obama took office, particularly after the stimulus bill passed: 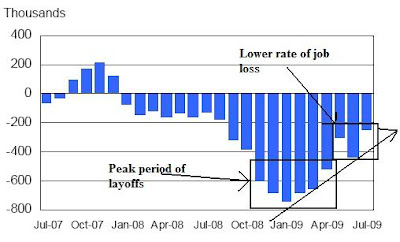 Rachel also references an article by Jacob Weisberg in Slate, which talks about Obama's "brilliant first year." He points out that one of the key accomplishments will indeed be the health care reform bill now being worked on in Congress.

"The case for Obama's successful freshman year rests above all on the health care legislation now awaiting action in the Senate. Democrats have been trying to pass national health insurance for 60 years. Past presidents who tried to make it happen and failed include Harry Truman, Lyndon Johnson, Jimmy Carter, and Bill Clinton. Through the summer, Obama caught flak for letting Congress lead the process, as opposed to setting out his own proposal. Now his political strategy is being vindicated. The bill he signs may be flawed in any number of ways—weak on cost control, too tied to the employer-based system, and inadequate in terms of consumer choice. But given the vastness of the enterprise and the political obstacles, passing an imperfect behemoth and improving it later is probably the only way to succeed where his predecessors failed."

So after reading Annette's blog and the Slate article, and listening to Rachel Maddow, I am feeling more positive than I was last week.

I know, it's a day or two late, but it's the thought that counts. Wishing all of my blogging friends a happy, healthy New Year. And let's hope things are better this year than last.

Some of you may have seen this posted on my Facebook page, but in case you missed it, here is a rousing punk version of "Auld Lang Syne." Believe it or not, the band is German, but they are singing it in English with a great Scottish burr.