California Dreaming...On Such a Winter's Day

I have to tell you, if I haven't already done so, I have Seasonal Affective Disorder. This year, for a brief few weeks, I actually thought now that I'm not working and could actually enjoy preparing for Christmas, that maybe I'd beat it. Maybe this time, I wouldn't get those winter doldrums, the cabin fever that hits me every winter without fail. But I was wrong. It doesn't matter if I have to go out in the winter weather or not, whether I'm working or not, I still hate winter.

Yes, the blizzard was exciting, and fun, for a day or so. And it sure looks pretty. But I'm afraid to walk on the ice, I hate bundling up to go out, and now that I don't have to work, my tendency to hibernate in the winter is worse than ever. I don't want to leave my house for any reason whatsoever. But at the same time I hate being cooped up and held prisoner in the house.

I need to move somewhere that doesn't have winter; a place where I can go outside all year, and maybe, just maybe have to put on a light jacket or raincoat from time to time.

Yes, I'm talking about San Francisco, of course. Some of you already know that San Francisco is my favorite city, at least here in America. The climate isn't too hot and isn't too cold; the views are spectacular, and if I lived there, the constant walking up and down hills would probably get me in shape without any effort on my part, unlike my habits living in car-dependent suburban New Jersey. San Francisco has great restaurants, lots of things to do, and beautiful scenery. And if you get tired of the city (hard to imagine), the surrounding areas are equally wonderful to visit.

Since today is the middle of the week of lost time between Christmas and New Year's, my cabin fever has risen to new heights, and I decided to immerse myself in daydreaming, via Realtor.com.

Did you know that the prices for houses and condos in San Francisco are lower than I have ever seen them? And believe me, moving to San Francisco has been DH's and my fantasy for over 20 years, so I've been watching real estate prices out there ever since Realtor.com ever came on line, whenever that was. Up until about 2 years ago, when all hell broke loose in the economy, there was not a single condo or house in the City of San Francisco that would be remotely affordable no matter how valuable our house in New Jersey might be. I saw prices of $500k and up for the tiniest studios. Well, that's not the case now! Prices are so low out there from what I see that we could actually buy something right now if we could sell our house immediately and move out there.

Unfortunately, what with DH's aging parents and my aunt still in the picture, that possibility is not going to happen in the near future. And certainly I don't want to hasten the time when aging relatives are no longer with us. So what is the solution to my winter daydreams? Any suggestions are welcome. Because with our luck, by the time we can sell our house, the prices in San Francisco will be back to the stratosphere.

In the meantime, enjoy a few pictures of affordable pieds-a-terre in the City by the Bay. It's the way I'm getting through my Seasonal Affective Disorder, for today anyway. Tomorrow I think I'll move on to Hawaii, where prices have also dropped dramatically!

Here's a condo at 240 Lombard Street, right near Telegraph Hill, for just under $350k. Here's one for $339k on McAllister Street, right near Alamo Square, where people take that famous picture that's on the postcards (see below). 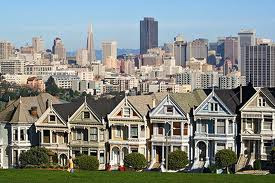 And if we want to be near the ocean and Golden Gate Park, check out this one, a 2-bedroom condo for $343k.

Now, I know these prices may still sound high, especially if you live outside the metro NY area; but the 1-bedroom condo in that last building is only $209k, and there are plenty of others in the low $200s and even below, if you aren't looking for an ocean view or a short walk to Telegraph Hill.

For instance, this studio for $199k with views of the city, a swimming pool, community exercise room, and other amenities in Diamond Heights. Or, if you're willing to be a little farther from downtown, here's a one-family house for only $239,000.

Oh, I know, if it sounds too good to be true, it probably is. The condos with the low prices probably have high monthly homeowner's fees, the single family house probably is in need of TLC, and so on. But the fact remains, suddenly San Francisco is at least in the realm of possibility. And that helps get me through my winter blues.

And, since this is how I spent my afternoon, here are the Mamas and Papas singing "California Dreaming."

Well, for once the predictions of a real blizzard came true. Usually they start with the dire predictions and then it turns out to be a bust. This time they went in the opposite direction. First they said the storm would probably miss us and be out to sea. The next thing we knew they were saying 11 to 16 inches of snow and then they upped it to 18-24!

I think we got closer to 24 inches than 18. I'm posting a link to our local placeblog, Baristanet, which features a lovely slide show of the conditions in our northern New Jersey area.

And here are a few pictures of my own. Enjoy the snow, everyone! 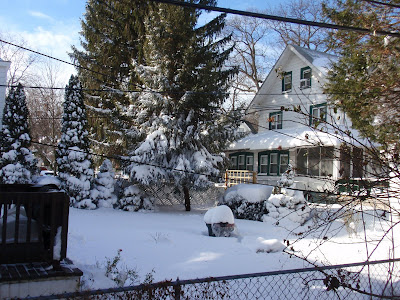 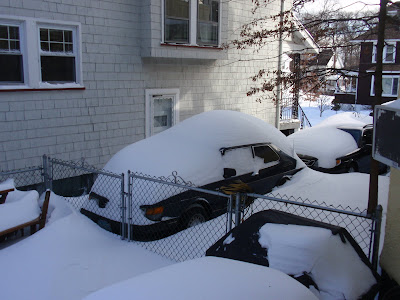 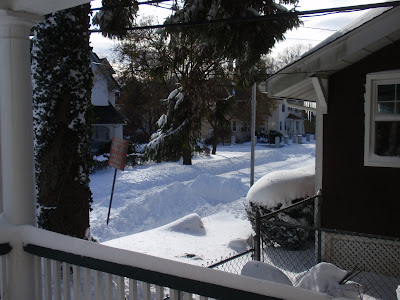 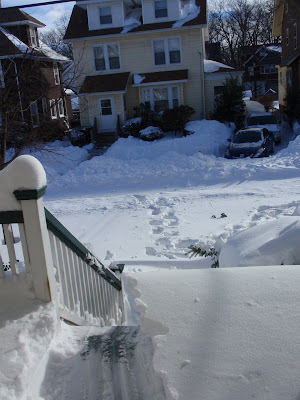 Merry Christmas and a belated Happy Chanukah, Festive Festivus and Whatever Else You Celebrate


For your viewing enjoyment, Stephen Colbert and Jon Stewart sing a holiday duet for you. May all you who celebrate Christmas have a lovely Christmas Eve, a Merry Christmas Day and a wonderful weekend of fun, festivities and family get-togethers. And everyone else enjoy their weekend and time off!
Posted by Mauigirl at 12/24/2010 01:20:00 PM 14 comments:

The Democrats Finally Get It Done!

After all the compromising on other issues, the Democrats have finally passed legislation to end the Armed Forces policy of "Don't Ask, Don't Tell." By a vote of 65 to 31, including eight Republicans, the up or down vote passed the Senate and will go to President Obama's desk for his signature.

Finally, an important promise made during his campaign has been kept by President Obama, righting the wrong that was done back under the Clinton Administration that forced gays and lesbians in the services to hide who they are.

For anyone who once respected Senator John McCain, I think his opposition to repealing DADT will be the final straw; his reinvention as a right wing idealogue is complete. From the article linked above:

"Senator John McCain, Republican of Arizona and his party’s presidential candidate in 2008, led the opposition to the repeal and said the vote was a sad day in history. 'I hope that when we pass this legislation that we will understand that we are doing great damage,' Mr. McCain said. 'And we could possibly and probably, as the commandant of the Marine Corps said, and as I have been told by literally thousands of members of the military, harm the battle effectiveness vital to the survival of our young men and women in the military.'"

Needless to say, some day people will look back on that comment and note the absurdity of it, especially since gay and lesbian service members have already been serving honorably in the armed forces all along, side by side with their heterosexual comrades in arms.

Even Joe Lieberman was on the right side of history, voting to repeal the act, and saying:

"'We righted a wrong,' said Senator Joseph I. Lieberman, the independent from Connecticut who led the effort to end the ban. 'Today we’ve done justice.'"

Of course, the day wasn't all good - the DREAM Act that would have allowed young immigrants to gain a path to citizenship by joining the armed forces or attending college for two years, among other stipulations, was voted down. Despite passing by a majority (55-41), it lacked the 60 votes needed to overcome a filibuster.

Something has to be done about the ability of opposition parties to filibuster just by saying they will. But that is a problem for another day.