It's been a lazy weekend for me. Yesterday we lounged around on the deck and had a couple of beers and then headed over to our neighbor's for the first barbecue of the season. As usual, I was one of the ones still sitting on their wonderful wraparound porch drinking wine and talking at 2 a.m. We never stay out that late ordinarily, but since this is three houses down from our house, DH could wander home at his preferred time of about 10 p.m. and I was able to stay until the bitter end!

Today was also spent out on the deck in the sunshine (I can't remember the last time we were able to be out on our deck in New Jersey in both March and April for many days in a row!). Now DH is staining the deck in preparation for the official deck season and I'm trying to come up with some haiku for a Sunday afternoon...

Santorum is out
Looks like it will be Romney
Less scary, still bad

Which Romney is he?
The right-wing conservative
Or that other guy?

You know who I mean,
The one who was governor
And passed that health care

It had a mandate
Just like Obama's plan has
He thought it was great!

And another thing:
He supported the women
Said he was pro-choice

But that's all over;
He's against "Obamacare"
And Planned Parenthood!

So which one is it?
Both sides are in a quandary
Who is the real Mitt?

Liberals worry
That he now means what he says
And lied in the past.

Such a conundrum.
But if you're a liberal
Your choice is still clear

Sorry for my long absence. My Aunt Frances, who was 91, just passed away over the weekend after having fallen and broken her hip in early February.

Despite the fact she recovered quite well physically from the surgery to fix her hip and was able to walk again with help, she never really recovered from the shock to her body at that age. She had little appetite before the fall, which probably led to her being weak in the first place; afterward she hardly ate at all. She was in rehab for about 3 weeks in a nursing home and then had to be moved to another nursing home after the rehab ended, because she had declined cognitively and would not have been able to take care of herself or be alone at all. She basically stopped eating or drinking about a week ago and just faded away early Sunday morning. I think she just didn't want to live in a nursing home and be dependent for the rest of her days.

While looking through her photo albums to pick some pictures for the funeral service, I enjoyed seeing all the pictures of her smiling and happy during her lifetime; laughing with friends, sitting on the beach at Cape Cod, standing in front of forsythia and cherry blossoms in Branch Brook Park or foliage in Vermont, enjoying outings with family in Massachusetts, posing in front of numerous Christmas trees, holding me as a baby in her arms while my parents looked on... smiling in front of palm trees in Florida, Puerto Rico, the Virgin Islands and Hawaii.

My aunt did a lot of traveling when she was younger; and when I was young I thought of her as kind of like Mary Tyler Moore's character on TV.  She was an independent working woman who traveled, hung out with her friends, and seemed quite cosmopolitan to me. My mother worked before I was born, but stayed home after that. My aunt was my example of working womanhood!

When I was little, she would get down on the floor and play with me. Since she was so young at heart, I remember telling her once back then that I thought she was a teenager. She was pretty tickled about that, considering she was in her late 30s at the time.

She remained single all her life, but did have a few romances. One of the longest relationships was with a man named Arthur, which lasted three years. He had wanted to marry her but she felt he was too unreliable, as he did not have a steady job. My aunt was always very practical.

Born in a tiny town in Massachusetts, she lived there until she was in her late 20s, when she moved to New Jersey, where my mother had already settled and found a career in medical writing. Their parents, my grandparents, also moved to New Jersey a year or two later. Eventually my aunt bought a house in Nutley and her parents lived with her and she cared for them in their old age while still working full-time. She learned to drive at age 42 and bravely traversed the highways on trips to New England.

Although my aunt never went to a 4-year college, she tried on a number of careers before finally entering the field of spectroscopy. At first she went to school for occupational therapy and found work at a mental hospital; but after having a patient turn violent and break her glasses, she decided it was not for her. She worked in a cookie factory for a short period of time as well. She joined the Waves during World War II but was discharged due to medical reasons shortly thereafter; she had had some kind of seizure, which was never really explained. She never had another one after that. She was always disappointed that she had not completed her stint in the Waves.

Once she moved to New Jersey she took some technical courses and got a job at Englehard Industries in Newark, NJ. She worked there for about 20 years in the spectroscopy lab, analyzing precious metals. She was the acting supervisor of the lab and had many friends from her working years there.

She retired at 62 in 1982, and continued to live in her house in Nutley until four years ago, when she moved to the senior citizens apartment building where my mother had moved, down the street from me. She lived independently up until she broke her hip.

I fondly remember all the Sunday dinners our family shared together, during my grandparents' lifetime and afterward. Even during the last few months my aunt was still inviting my husband and me over for a meal at her apartment. I always had an impression of my aunt as rather a gourmet cook; she liked to try new recipes and in our plain-food New England-based family, she was the first to put garlic cloves on the outside of the lamb at Easter!

I'll also always remember the ample drinks before dinner on the patio in nice weather and the drinks being shaken-up in an old screw-top jar. My aunt also loved picnics; when we were all younger we would take a picnic up to one of New Jersey's little lakes and have a picnic on the beach - always with a hidden thermos of wine!

An ardent Boston Red Sox fan to the end, my aunt paid extra for the MLB channel on Comcast just to be able to see the Sox play on a regular basis.  She was also a subscriber to the Red Sox Die Hard magazine when it was still being published in hard copy. And she was always ready to discuss the merits of the the Red Sox versus the Yankees with her nephew-in-law! She was lucky enough to see the Red Sox win two championships in her lifetime, a feat many Sox fans did not achieve.

My Aunt Frances was a very generous person, not only to me, but to many charities. She was always giving money to causes that she believed in:  the World Wildlife Fund, the Humane Society, veterans organizations, and charities benefiting Native Americans, to name only a few. She was a faithful churchgoer and did a lot of volunteer work for the church. She was especially proud of her work in the church's Memorial Garden, where the ashes of some of the congregants were scattered instead of being buried elsewhere.

After she retired, she volunteered as a tutor, helping immigrants learning English as a second language become fluent by conversing with them and helping them read English. She also took up bowling in her late 70s, bowling with my mother on a league until as recently as three years ago. She had a 140 average at her best; not too shabby for someone who barely weighed 90 pounds.

No mention of my aunt is complete without talking about her cats. I still remember each cat she had; there was Tiga, who she got as a kitten from a man she worked with named Joe; Tiga had the biggest ears I'd ever seen on a kitten. He never quite grew into them. She had Smokey, a gray cat that died young due to a gastroenteritis virus; and Thumper, a black-and-white cat that used to belong to an old boss of mine whose kids became allergic (we took his mother, Sheba).

There were a number of others, ending with Amanda and her son, Geoffrey, her last two cats. Amanda, a tiger cat, lived a good long life but developed cancer and had to be put to sleep not long before my aunt moved to her apartment. My aunt moved in to the apartment with Geoffrey, a black-and-white cat, who lived to the ripe old age of 18 and died only last year. I've often felt that my aunt went downhill from the moment Geoffrey died. In retrospect, I wish I'd convinced her to get another cat. 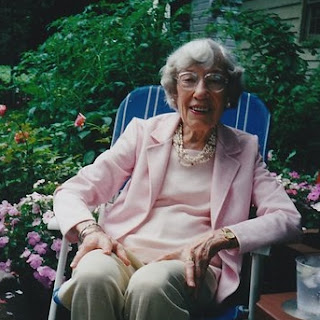