Well, it's been a long 8 months since the election, and an even longer 5-1/2 months since Trump officially became president.

It's been even worse than we thought it would be. I think some of us hoped his whole campaign was an act to get elected and that afterward he'd show that he wasn't quite the hateful right-wing bigot he had seemed when on the campaign trail.

But he immediately went to work showing he meant every bit of it. It all started with the appointment of his transition team and closest aides; then his inauguration speech, which was a vile and dark denunciation of the current state of the country. He then went on to appoint the worst of the worst as cabinet members, as well as doling out key positions to his immediate family members.

With the exception of Secretary of Defense James Mattis, who seems to retain a modicum of integrity and actual competence in comparison to the rest, those he appointed to cabinet posts are all from some Bizarro World where they embody the complete opposite of what their department is supposed to support.

Betsy DeVos, champion of charter schools and school vouchers, for Department of Education; Jeff Sessions, a man with white supremacist ties, for the Attorney General, leading the Department of Justice; Rick Perry, who famously wanted to eliminate the Department of Energy - if he could have remembered the name - as Secretary of Energy; and worse yet, longtime EPA critic Scott Pruitt as head of the Environmental Protection Agency, who is already doing everything he can to roll back as many regulations as possible.

And that's not all. Now we have Tom Price, a staunch opponent of the Affordable Care Act, as head of Health & Human Services; and Ben Carson (who outright said he wasn't qualified for a cabinet position despite having run for President) as Secretary of Housing & Urban Development, a topic in which he has absolutely no experience. I could go on. But you already know all that anyway.

The one bright spot is the uprising on the left, now known as The Resistance, that happened immediately after his inauguration, starting with the Women's Marches all over the world. As soon as we heard there was to be a Women's March on Washington, several friends and I immediately made plans to go. As everyone knows now, the march was so large that the members couldn't even actually march - the area was full all the way to the Washington Monument. We were tucked into a packed street next to the Air and Space Museum. Despite the crowds, it was a calm and peaceful demonstration of what "Democracy looks like," as one of the chants pointed out. 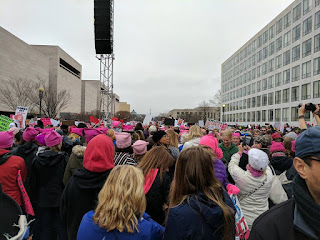 Then came the first Trump travel ban that spurred thousands to protest at airports and elsewhere. Then there was the march to support Science, and many others, demanding he release his taxes, be impeached, etc.

This is something I don't remember seeing happen under any other president since the Vietnam War. The response to the election of this self-aggrandizing, petty dictator has been visceral. And women are leading a lot of it. Part of that is our fear of having our rights taken away, part of it is the anger about the misogyny that played at least some part of the vilification of Hillary Clinton by both the right and by Sanders supporters from the left. Part of it is just plain disgust that a man who once bragged about grabbing women "by the pussy" actually got elected. And the fact that no matter how vile he is, how inappropriate and unpresidential his tweets are, nothing seems to matter to the Republican Congress or the voters who supported him. The frustration is all-consuming.

The endless speculation and drip-drip-drip of the administration's ties to Russia, and the possibility of collusion on the part of the Trump team with the verified Russian interference in our election, have just spurred further resistance. Trump firing Comey, reminiscent of Nixon's Saturday Night Massacre, fueled the fire and deepened the suspicions that there is something big to be discovered that Trump doesn't want us to find out.

Special counsel Robert Mueller is gearing up for a full-fledged investigation into every aspect of Trump's past, including his business dealings, possible money laundering and more. People keep asking why this process is taking so long. We have to keep reminding ourselves that the Watergate investigation took several years before culminating in Richard Nixon's resignation. And we have to make sure that Democrats win in Congress in 2018 so if impeachment becomes a possibility, there will be Democrats in power to initiate the process. Because the GOP never will as long as the president is able to sign off on any bills they bring him.

Another bright spot is, despite the many mean-spirited and harmful executive orders Trump signs, not that much actual legislation has taken place. Some reversed President Obama's own executive orders, many of which were put in place just before he left office. Others, like the travel ban, are still being litigated in court. Many of the loosened regulations pertaining to climate change, such as favoring coal vs. clean energy, or loosening restrictions on mileage requirements for vehicles, may not ultimately make that much of a difference, given the public and the rest of the world will continue to demand cleaner energy and better mileage for their cars. Companies aren't going to make special polluting vehicles or gas guzzling cars just for the (maybe?) 30% of Americans who don't care about climate change or clean air.

The biggest harm that Trump has been able to do is appoint Neil Gorsuch to the Supreme Court, which is all thanks to Mitch McConnell's unprecedented obstruction of the nomination of Eric Garland for the seat well before President Obama's term was ending. For now, although Gorsuch has been reliably conservative, possibly even more so than Scalia, the Justice he replaced, at least so far Anthony Kennedy, the swing vote, has not yet retired. That seat (or those of any of the more liberal justices, should they leave) will be the key seat that could change the course of justice in this country for a generation to come.

The Resistance must continue and must be effective. We need to make sure we don't get distracted by the tweets or by hateful memes about Trump and focus on the policies he and his cabal are promulgating that will do lasting harm to our democracy.

One thing we are lacking is real protest music. Where is Phil Ochs when we need him? Thankfully, since he is no longer with us, someone has already had the brilliant idea of reworking Phil's denunciation of Richard Nixon (which in itself was a remake of his earlier song about the state of Mississippi) for the Trump era. The words have not changed much at all from the Nixon version. Amazing how in 2017 so much has remained pertinent.

Follow me on Twitter - I never tweeted much until January 20. It is now the center of The Resistance. https://twitter.com/Mauigirl52