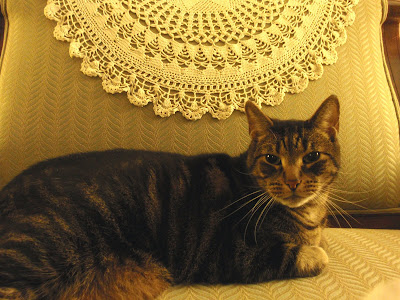 Baxter here. I'm finally Back. Sorry to have been Out of Touch, but I had a Health Issue over New Year's Weekend. My Humans went away to that Cabin place with Little Cat and That Dog, and left me here to fend for Myself as usual. But I didn't feel Good.

When they returned, I hid under the Bed and wouldn't come out. Finally I did come out and then stayed All Night by my Litter Box, just lying there, and refused to Eat. My Female Human then stuck me in that Zippered-Up Bag they put me in to Travel in, and dragged me to that place they call "The Vet." I was Not Pleased; especially when they shaved some Fur off my chest and stuck me with a Needle. Most uncomfortable. It turned out I had Something called Anemia and they didn't know why, plus I'd lost 3 pounds; I was down to a svelte 19 pounds.

So my Humans started giving me some Pills that made me Hungry and I started gobbling down Wet Cat Food, something I don't usually like to do; I've always been a Dry Food Type of Cat. But I figured why not - Little Cat has been getting All the Attention. Now it's My Turn. I started being Finicky and only eating Fishy Tasting Stuff. (I'll sneak Dry Food once in awhile when I'm sure the Humans aren't watching though). I'm off the Appetite Pills and doing Fine.

They still don't know what was wrong but I'm back to my Old Self and am feeling Quite Perky. Losing a little Weight didn't hurt me any; I have started Running up and down the Stairs again in the Middle of the Night as I used to do when I was Younger. My Human says she'll take me back for a Check-Up in a month or two and make sure my Anemia is gone. But since I'm acting Healthy she isn't as worried now.

However, something Else has happened since then. My Humans seem to have found Another Dog. Mind you, I haven't gone anywhere near It. But I've seen It from my safe perch on the Bed in the Spare Room.

From what I understand, The Other Dog appeared out of the Dark on Thursday Night and seemed lost, so the Humans took It in. Apparently It's a Girl because my Humans say she recently had Puppies. She was Very Skinny, had Really Long Nails and could hardly walk on them Properly, and smelled Very Bad. They gave her a Bath and took her to the Vet. Now she's getting ear drops for an Ear Infection, but is Very Healthy otherwise. I heard my Female Human saying something about her having had Shots and that she will be Spayed in a month, whatever THAT is.

My Personal Dog, the one I usually complain about, is Unhappy. I think she's Jealous of the New Dog. If she's Not Happy the Humans will have to find Another Home for the New Dog. I think they call her Angel. I don't really know why, because, as a Cat, I can vouch for the fact that NO Dog is an Angel. Far from it. But that's what they call her.

So, the Household has been Disrupted ever since the New Year. Little Cat and I are eating lots of Wet Food and there are Dishes of food lying around All Over, the New Dog is kept in the Kitchen to keep her Separate from the Old Dog. The Old Dog can't get out in the Yard through the Kitchen so My Humans have to walk her more than Ever. (That she's probably Happy about). The New Dog gets Jealous if the Humans pay attention to the Old Dog, and Vice Versa. It's a Real Circus around here.

Just thought I should check in and let you know What's Happening around the Maui Household. There has been Lots of News I haven't been able to keep up on, but either my Human or I will be back soon with some Updates. Oh, and here is a Picture of The New Dog. Anyone want to Adopt her so this Place can get back to Normal? 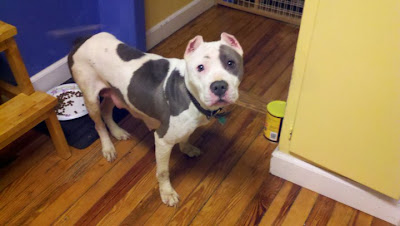 I just spent about an hour trying to find a suitable cartoon or other illustration of how totally dreary the weather is today. However, I couldn't decide on any one thing and finally gave up. It was fun trying though.

In the meantime I'll provide a few February-themed haiku to tide myself over till the next time I actually get up enough energy to write something.

Snow looks so pretty
Right after the snowfall ends
Then it gets dirty.

I'm tired of winter
Spring is still so far away
Days are creeping by.

Sooner or later
Even this much snow will melt
Hard to imagine.