A Sad Goodbye to Baxter 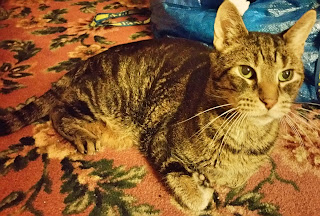 Hello Blog Friends. It is with great sadness that I must report that Political Blogger Extraordinaire and Cat-About-the-House Baxter passed away suddenly in April. He had numerous health issues, from an overactive thyroid to what we think was inflammatory bowel disease, which was mitigated by Prednisilone - but that caused diabetes. So he was getting two pills and a shot of insulin, twice a day, for the previous six months, and was doing pretty well, until one evening he just collapsed in the upstairs hallway. He went into a coma and died the next morning after spending the night on our bed. We didn't take him to the vet as we could tell the time was near, and didn't see the sense in stressing him out with a vet visit in the middle of the night. He was 15.

He had a good long life, of course, but we always want a longer time with our furry family members. It's strange to no longer have a cat. And given  our dog Angel thinks cats are a type of snack, we probably can't have another cat as long as we have Angel.

Diva is now close to 15 as well, but thankfully is in good health except for arthritis. She is still as demanding as ever and she and Angel are best friends and both sleep on the bed with us now that Baxter is gone. (Angel used to have to sleep downstairs and Baxter and Diva shared our bed with us  before). Here they are both giving me the stink-eye about something. Angel (right) learned how to do this from Diva, of course. 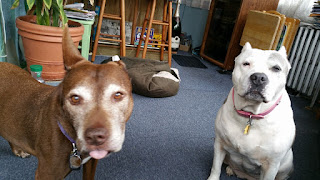 So, sadly, there will be no more blogs from Baxter. He had started his last entry back in February and never finished it. But, for old times' sake, I am leaving the unfinished version here below. It's interesting to see what was happening 5 months ago and to realize things have only gone downhill since then!

Well, here I am Again. I took a Break for awhile to see how Things Worked Out. And here we are in mid-February and Things are Just as Weird as ever.

Donald Trump is continuing to Lead the Republicans in their Primary race, which I find Unbelievable.

My Female Human says her now-deceased Mother would be Spinning in her Grave at the idea of President Trump. Her Mother was Amazed that Ronald Reagan became President. "Only in America," she would say, "could an ACTOR become President." She should see what's Happening now!

And worse yet, in Second Place is that Cruz guy; he makes my Fur stand on end. He's the one who some believe has been Anointed by God to be the next President. And oh yeah - his Dad is one of them.

To Me, those Overtly Religious Types are really the Scariest of all. Now, you know we Cats don't hold much Truck with Religion. Yes, there is Ceiling Cat. But Ceiling Cat kind of minds His own Business. Ceiling Cat doesn't expect us to Worship Him all the time (except for an Occasional Offering of a Dead Mouse or something). And certainly we aren't Required to have Specific Beliefs or to kill Other Cats if they don't Believe in Ceiling Cat. Basically we Cats can do Whatever we want and Nobody Butts into Our Business.

But some of these Religious Types who call themselves "Christians" (not to be confused with Real Christians who try to live Life by the Golden Rule, as instructed by the actual Christ that Humans call Jesus), seem to think they should Rule the World. In Fact, this Cruz fellow is part of a Sect called Dominionists, who actually believe the United States should be run as a Christian Nation and that Biblical law trumps Civil law. In Other Words, he wants the United State to become a Christian Theocracy. Now I find that Highly Ironic, considering these Types of People are the ones that are So Afraid of Muslim Theocracy (i.e., Shariah Law) becoming the Law of the Land. Pray tell, what is the Difference?

Then we Get Down to Marco Rubio. This guy is just Too Young and doesn't really Know What He's Doing yet. Give him another ten years maybe. He was supposed to be the Big Deal among the Republicans, before Trump came along and Blew that idea out of the Water.

Oh, and Jeb Bush - I think the Genes were spread out Too Thin - by the time they got to him, he didn't have Anything left. Not that there was Much to Begin with, when you look at W. But he has not had the Success I would have thought his Name might have Brought him.

Thankfully, by now some of the Field has Dropped Out, so I don't need to go into people like Christie. I'm a New Jersey Cat. Enough said. We in New Jersey know this man is an Idiot and a Bully. It just took a while for the Rest of the Country to figure it out.

Ben Carson should have Dropped Out ages ago. But I'm glad Governor Kasich did not. Out of All of Them, he may be the most Sane. Of course, that isn't saying a Lot.

Who do I think might win? Hard to Say. But I hope it's not Cruz. Frighteningly, Trump seems like a Safer Choice, overall. And again, that's not saying a Lot!

****
Thank you, Baxter, for your last thoughts on the election.

Note that Baxter hadn't even gotten to the Democratic race. Now we have Hillary as the presumed nominee, and she and Trump (who believe me, I do find terrifying, especially now he's picked Mike Pence as VP, since he brings all that religious nonsense along with him and especially his anti-LGBT attitudes). But I also find it highly concerning that Hillary is disliked and distrusted nearly as much as Trump as this does not bode well for November.

The Republican convention starts on Monday. I wonder how crazy it will get. I look forward to watching Stephen Colbert Monday night, as I hear he and Jon Stewart are planning to do some convention coverage!

Watch this space... I haven't given up on blogging for good and hope to get back to writing a little more often. Facebook's format isn't formal enough to do any real writing, so I would like to address some issues over here, even without Baxter to help. Maybe Diva, being an old and wise dog, could help out now...