At this rate, that's all that will be left of my dog...

After Diva had her little bump taken off right before I went to Australia and it turned out to be a mast cell tumor, we were really relieved to know it had been taken off so early and was a low grade type, meaning it was not aggressive.

Well, wouldn't you know the week after we returned, we found another bump on her - this time on her "arm." (Is that what you would call a dog's front leg?)

And, we found a little thing on her tummy too. So it was off to the vet again on Friday. Our regular vet said both bumps had to be taken off, so we made arrangements for the same surgeon to do the surgery as before. So today Diva had two more chunks of her skin taken off and is doing fine, but is spending the night at the vet's. Now comes the waiting to find out what the biopsies show.

Since the place she has the surgeries done, The Animal Emergency and Referral Associates, also has an excellent oncologist on staff, we made an appointment with her for a week from Monday to consult with her and find out whether she recommends further treatment to prevent a recurrence. We aren't taking any chances with our girl.

Of course, Baxter is thrilled with the situation. He loves it when the Evil Dog is not here to annoy him. He is happily curled up on the bed in between DH and me, in the spot usually occupied by Diva, purring loudly.

to a totally different subject. While watching a clip of Al Gore testifying before Congress about global warming, I was struck by something that could not be ignored...Al Gore has REALLY porked up! What has happened to the man? I hardly recognized him! Seems as if he's been doing a little too much speaking on the rubber chicken circuit and eating out too much or something! (photo courtesy of CNN). (Not that I should talk, but I couldn't help but notice.) 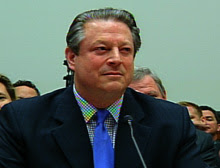 On yet another subject, spring has finally returned to New Jersey. Today much of the snow on the lawn of the Big Corporation melted and the robins must be ecstatically happy, much more than the other day when I saw about 30 of them huddling together on one lone strip of grass surrounded by snow, trying to find worms.

Tonight DH and I spent the evening at my mother's eating Indian food. My mother has always enjoyed a good curry, and we often take her out to a local Indian restaurant for Indian cuisine. But recently, wonder of wonders, a new Whole Foods opened in West Orange that actually has a whole section of hot, ready to take out, Indian food (as well as Italian and other ethnic specialities).

For those unfamiliar with it, Whole Foods is an all-natural, organic grocery store that caters to gourmets and those with deep pockets. It used to be a lot more true to its "crunchy granola" roots but more recently has expanded into being a top notch gourmet grocery store as well as providing politically correct, grass-fed, organically grown, recyclable packaged produce and other viandes to the local purists. This new store is truly over the top - it has a gourmet organic chocolatier, the aforementioned hot food area, and tonight I even saw they have added politically correct clothing! Organically grown cotton pajamas of some kind; flannel shirts made from hemp and costing $64.

But I digress. I must tell you about my frugality. I'm so proud. I actually returned something because I thought it was too expensive. Let me explain.

I was wending my way up and down the aisles, as is my wont in Whole Foods (looking at stuff is part of the experience). As I went down the juice aisle, I happened upon a section that included juices - all kinds of exotic types. I spied a bottle of Mangosteen juice and was intrigued. I'd read about mangosteens in the NY Times in this article, and had read elsewhere how healthy they are supposed to be, high in antioxidants and all that. So I grabbed the bottle and stuck it in my cart.

After paying for the bounty I had loaded up on, I thought the bill seemed a little high so I glanced at the receipt - and lo and behold, my mangosteen juice was $18.99. $18.99!!! For a small bottle of juice! And it was juice I hadn't even ever tried before. What if I hated it?

Now, I tend to be extravagant, even profligate. But even for me, $18.99 was crossing the line. Maybe it was thinking about that $2000 bill for Diva that was going to be on my credit card this month that did it.

I marched over to the Courtesy Desk and asked them to take it back and refund the amount to my credit card.

Poor Diva, I hope she recovers ok. Good to hear you've thawed out again...hopefull Spring will last this time!
Had to smile at your shopping experience....I often wonder why it is thatfoods with LESS calories, LESS fat, NO additives etc are MORE expensive. How come I'm paying more for less!!!