Thanks go to Deb at Drivin' 55 for inspiring me to do the same meme she did today.

Because it is Friday night, and I was just burned out from the week, I was really having trouble coming up with the energy to write anything lucid tonight. Everyone was already talking about President-Elect Obama possibly having asked Hillary Clinton to be his Secretary of State (which I think could work out very well - in reality, they do have very similar positions on most major issues and after all, her job would be to carry out his policies, not her own, anyway). Sue J had already written about Judith Warner's column in the NY Times talking about the feelings of those whose marriage rights had been ripped away by the passage of Proposition 8, which I thought really brought the human side of this tragedy to the forefront - how it made people feel, how it affects their children.

So that left me with nothing! Then I came upon this meme. So I am hijacking the meme and thereby saving my daily posting record for NaBloPoMo (and yes, I am going to cheat and turn back the clock on the post since it is actually after midnight and it would look as if I posted it tomorrow!). 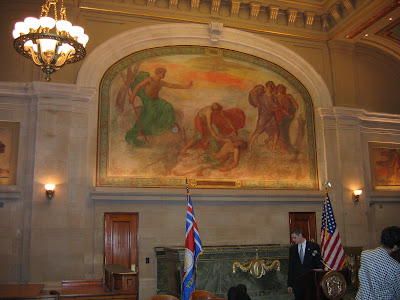 This is a mural in the interior of the beautifully restored Essex County Courthouse in Newark, NJ, which had a grand re-opening ceremony three years ago. DH attended the opening, along with some of our other friends, and took some pictures.

Below are some more of his pictures of the building, which was designed in 1902 by Cass Gilbert, the reknowned architect who designed the Supreme Court and the Woolworth Building, among others. 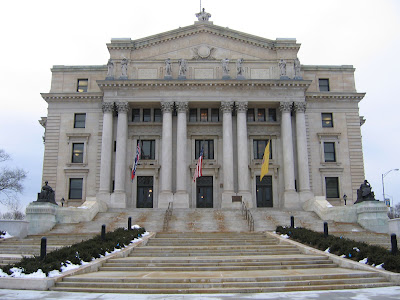 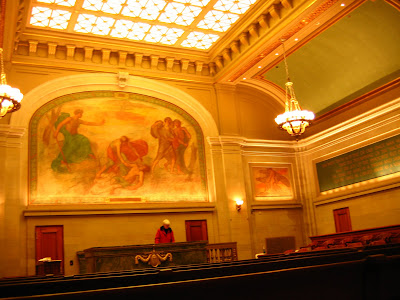 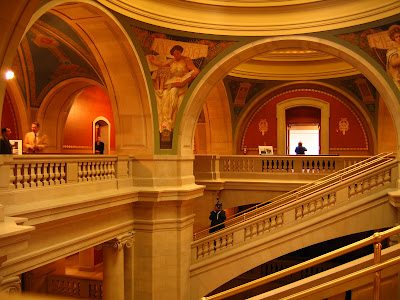 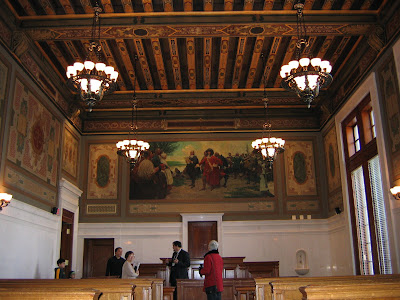 Sadly, when people think of Newark, New Jersey, they are more apt to think of urban blight rather than beautiful historic buildings. But Newark actually has a number of lovely buildings and some great architecture. It even has a Gothic cathedral, The Cathedral-Basilica of the Sacred Heart, that rivals Notre Dame (although of course it's not as old). If Newark were somewhere else, people would be coming for miles just to see this cathedral. Here is a view of it, overlooking Branch Brook Park during cherry blossom season: 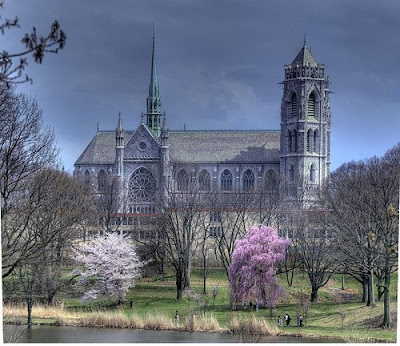 Very excellent photos, but I'm telling the President of the Internets that you cheated!

Wow! What a gorgeous courthouse! And the cathedral picture looks like a postcard, it is magnificent.

Newark gets a bad rap, and that's too bad.

Thanks Fran, glad you enjoyed!

Randal, it's the American way!

DCup, yes,the courthouse really is lovely. And that picture I found on the internet of the cathedral is awesome. We drove by the cathedral last night on our way back from dinner. They light it up at night so it's great.