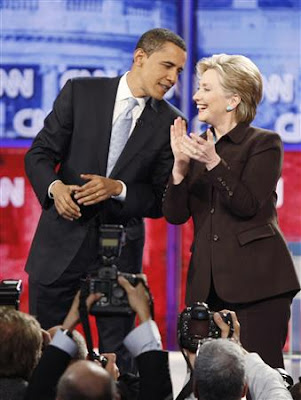 Hillary and Obama put aside their differences tonight and made it clear their real opponents were the Republicans. In fact, they made a point of not bickering or sniping at each other, much to the disappointment of Wolf Blitzer, who did his best to get them going.

Before the debate, the talking heads were hyping up the upcoming debate between the two remaining Democrats as if it were the Super Bowl, talking about "sitting on the ball" and who was going to start out aggressively. If I hadn't checked to see if I was really tuned in to CNN I'd have thought I was watching ESPN. It was that hard to tell.

Both candidates refused to take the bait when Wolf Blitzer brought up controversial issues that he obviously hoped would inspire animosity between them.

They discussed everything from health care to immigration to Iraq, and even while disagreeing, continued to hammer home that their views were much more similar than they were different, and miles apart from the views of the Republicans. This is how it should be.

The biggest applause of the night came when they were asked if they would consider an Obama-Clinton or Clinton-Obama ticket ("There is a difference," quipped Barack).

I was impressed with Hillary's responses, as she kept her cool and had an answer for all the tough questions that were thrown at her, including when she was asked if she'd be able to keep her husband under control if she became President. She seemed relaxed and in good spirits. I hadn't watched more than a clip or two of previous debates so I was pleasantly surprised by her performance tonight.

Barack Obama was also strong, and spoke fluently about all of the issues. He seemed to have some pretty concrete answers to questions about his proposed policies for health care and other programs, which is what I was looking for. He too seemed relaxed and able to respond easily to anything he was asked. He did seem to harp a bit too much on the fact he didn't support the Iraq war from the beginning when discussing what his policy would be in Iraq in the future, but of course that is a key selling point for him, and he wants to make sure he gets it in.

At the end they parted cordially. I'm sure the media were disappointed that no blood was shed, no teeth were bared, and both candidates comported themselves with dignity and good humor.

They both did a good job...and your summary nailed the highpoints...

I am happy that the media did not get the Bloodfest they were craving...

Obama and the Borg Queen were on their best behavior and stayed on message throughout. Policy was discussed and the viewer informed.

CNN and Wolf Blitzer were perfectly awful. How did it come to pass that the network of AIPAC controlled most of the Democratic debates?

Thanks, you hit it on the head. Things went great between them both and nothing said by Wolf could change that.

I like last night debate and the positive charge from both of them.

My gut feeling is that Obama will win the nomination, and he will take Edwards as a running mate.

If Hillary can somehow pull ahead of him now, I think she'll bring in a unknown as a running mate, rather than Obama, but the Dems would want Obama as her running mate.

Wolf tried hard to create a rift between them, and I love how they both kept focused on keeping the debtae positive.

If Hillary can somehow pull ahead of him now

Actually, I believe she's slightly ahead in all of the Super Tuesday states. But anything can happen, as we've seen.

Everyone I've talked to seems pleased with the candidates -- and annoyed at the baiting of Wolf et al.

Nationally, according to GALLUP, Obama has pulled to within four points of the Borg Queen.

As recently as November, Obama was down twenty points.

It would appear that Obama is climbing and the Borg Queen has flattened out.

This weekend, Sen. Ted Kennedy and Caroline Kennedy will campaign throughout the Central Valley of California -- an area of workingclass whites and hispanics, leaning heavily labor and two demographics who embrace the Kennedy legacy.

My fingers are crossed that after the appearance of Sen. Kennedy and Caroline Kennedy, Obama will pickup votes among these important groups.

I miss Edwards, but Obama did look and sound great.

Enigma, I'm happy too - I was so glad to see them point out that they are on the same side.

Christopher, it is shocking to me the way the moderators have become so unprofessional and the whole debate format so show-bizzy. Perhaps it is because it was in Hollywood? Or have they all been like this? Blitzer was awful the way he was acting.

LT, they were smart not to let him get to them!

Nick, I agree, I don't think either of them would pick one another as VP; however, if polls showed it would be the winning combo, they might.

Sue, agree, Hillary is leading in most places but not by as much as she used to overall. We shall see what happens.

Evil Spock, good to see you back! It was indeed a late night and I overslept this morning!

And when Obama held the chair for Hillary at the end, I thought, "Oh no, he di'int!"

Punditmom, at one point he had his arm around the back of her chair while they were talking, and I was thinking "OMG, does he have his arm around her?"

I agree. . . the media always seems angry when they can't make the story about the horse race

MauiGirl - I love your blog. You are a good writer. I've already included it on my blog's list of super cool blogs. .

Hillary stood out in a negative way by her constant skipping around the fact, that she voted for a resolution to go to war with Iraq.

They did a nice job of throwing all that media "fight hype" back in Wolf's scrubby face.

I was annoyed by CNN showing all the Hollywood celebrities in the audience. Who cares what Jason Alexander or Diane Keaton think?

and for once both of them were smart -- and held back. i am sure the producer of that show is looking for other work by now.

It was good to see them acting this way and not in the big fight mode.

Tommy, thanks so much! I'll link you as well.

Larry, you're right, she doesn't really have a good excuse for it.

Suzi, you're right - and I loved it when Hillary said "Really?" in a sarcastic tone - with a laugh - when Wolf said something about a comment being a swipe at her. Made Wolf look like an idiot.

Kathryn and Marky, you're right, Americans love their celebrities so CNN plays right into that. The whole debate had the ambience of the Academy Awards or something similar. Not the serious wonky atmosphere of debates in the past.

DCap and Fran, you are so right - Wolf and CNN were totally trying to get them to fight and I'm so glad they didn't give in to it.

Poor Wolf. I hope he's not fired for breaking his streak of creating controversy

So finally just the issues. Maybe we have a chance to overcome the issues we've been living with for years. As my grandson Gary retrains to return to Iraq my heart aches. What are we doing, and then the care the soldier receives when they return is deplorable. I pray I get healthy so I can take action regarding our soldiers and they're care after Iraq. Some of the things they currently pay for while being a soldier..for instance a weekly haircut...shouldn't it be provided for by the Marines..and many other issues I will let you know about..

Disgust, disappointment, and despair for the families of those who have been will return and have come home with simple and intense medical needs. I'm almost to the point of I don't care who wins, just let them make a difference. Please.....

I just hope we can remember that when this is over, we need to defeat the Republicans, no matter who wins. I found it refreshing that both stuck to issues and wish their supporters would as well.

This article was extremely interesting, especially since I was searching for thoughts on this subject last Thursday..