It Ain't Over Till It's Over 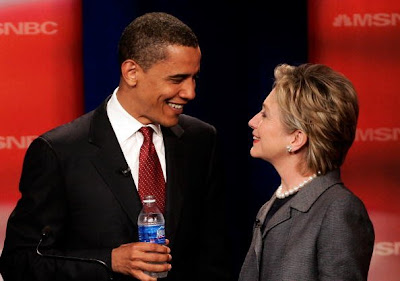 After last night's win in New Hampshire by Hillary, it is obvious that the primaries are not over by a long shot. Obama came in a strong second, but after the expectation that he would win big, it felt worse than it was.

I feel that the battle will really be between Obama and Clinton, but Edwards has not given up and may still surprise us. Whatever happens this year, at least it isn't dull.

In looking for a good picture of the two main candidates (Photo source: Win McNamee/Getty Images) I found an interesting point of view by Deborah White on About.com.

In this article, she compares the "profound differences" in communications styles of Clinton and Obama, and the way that they connect with voters. Ms. White explains:

"...the Obama camp uses symbols and personal contact to establish direct grassroots connections WITH people. In contrast, the Clinton camp uses images of feminine authority and pop culture allusions to appeal TO people."

She says that Obama "emphasizes bipartisan reconciliation and listening," while Clinton "boasts a long record of forceful, principled top-down leadership" and is "widely known less as collegial, and more as authoritarian. Based on her confident, experienced wisdom, Sen. Clinton emphasizes telling, not listening."

Ms. White points out that in recent times we've tended to elect authoritarian leaders, not conciliatory, diplomatic leaders. If past performance is indicative of the future, then Clinton may get the nomination, if not the election. But this is the year everyone says they want "change." It remains to be seen how much change they really want.

According to the article, "Obama is betting that younger voters will reject top-down politics as usual, and will opt, instead for authenticity and personal connection."

Ms. White goes on to describe an encounter with Barack Obama on a conference call:

"This past weekend, I participated in a brief conference call with Barack Obama, in which he took a few questions. Sen. Obama made me feel like it was just him and me and a few others. In everyday lingo, the senator warmly thanked me for making time for his phone call and for my support... and his gratitude felt genuine. Not one staffer or aide uttered a word.

That really happened. Except that a few thousand others were likely on the conference call, too. And they probably all felt the same symbiotic connection with Sen. Obama."

Interestingly, this is how I always heard Bill Clinton made people feel when he met them up close and personal. And we all know how compelling Bill Clinton could be.

As Yogi famously said, "it ain't over till it's over." And Obama and Clinton have a long road ahead. We'll see which communication style wins out with the voters.

Hillary is first
Obama came in second
How could it be?

Women went for Hill
Independents for Barack
She came out on top.

Two primaries down
But still forty-eight to go
It's a long campaign.

What is it we want?
Competence or idealism?
Barack can inspire.

A few tears did help
Hillary is sensible
But now seems human.

Obama rolls on
His speech inspirational
He says "Yes we can!"

McCain won the day
Romney's looking rather tired
And where was RUDY?

I thought we had to wait for the fat lady to sing!

Don't they look as if they really like each other in that photo?!

Let's hope America means it when they say they want change.

Hi, I awarded you a Just Post award over at One Plus Two! You can E-mail her for the button!

LOL, Liz, that is also true!

I know, I liked that photo. Maybe they could get along enough to have a Clinton-Obama ticket?

Punditmom, thanks so much! I'll be by to visit and get my award!

Hillary would never be on a ticket with Obama or Edwards.

Perhaps Obama would consider Edwards, but there is too much sleaziness with Hillary and her group.

Yay for your haiku! Love it.

And I found the info about communication style to be particularly interesting. Thanks for sharing that!

That picture is indeed priceless!

This contest is fascinating. I am watching Obama and Clinton with renewed interest this week. I don't think Edwards can be discounted.
Just yet.

Larry, you're probably right - too much ego involved with Hillary to share the ticket. Obama/Edwards - perhaps.

DCup, glad you liked the haiku! Every now and then I realize it's been awhile between haiku days so I have to have one! I got addicted to them during NaBloPoMo!

Fran, glad you liked the post and picture! I was amused to find one with them so chummy.

Mimi, it is very enthralling. I am glad the contest isn't over yet - we voters deserve to have time to make up our minds. And I agree, Edwards may yet have a strong showing, especially in the south.

I think it's interesting that Hillary has to de-womanize herself so much for this campaign that her communication style becomes more male.

Linda, interesting point. The question is, is she de-womanizing herself to succeed in a man's world - or is her communications style naturally more "high control"? I think actually she is not a "natural" like Bill or Obama and that her communication style may just be this way. I've known both men and women who could be accessible emotionally and inaccessible emotionally; it may be a personal style issue for her.

Randal, LOL! Very apt! (I think Rudy has blown it by not trying to win anything before Florida. But we'll see. If so, good...)

It was pretty much impossible for 17 polling organizations to get it so wrong about the front runner.

It also isn't an accident that Diebold is in control of 80% of New Hampshire's ballots.

Kucinich is demanding a recount and he's even put up $2,000 of his own ca$h to make the recount happen.

Christopher, I didn't realize 80% of the machines were Diebold - that does make it more possible that something sinister was going on.

But will a recount help? Is there a paper trail to these machines?

If Hillary is the nominee (God help us) expect to see Michael Bloomberg jump in as an Independent.

This will split the ticket even further (50% of voters say they won't vote for HRC under any cicumstances) and a HuckaBible or a McCain victory becomes very possible.

If Hillary is the nominee (God help us) expect to see Michael Bloomberg jump in as an Independent.

This will split the ticket even further (50% of voters say they won't vote for HRC under any cicumstances) and a HuckaBible or a McCain victory becomes very possible.

Oops, sorry for the duplicate!

Heaven forfend! McCain, while not someone I support, is the best of a bad lot, but Huckabee would be intolerable.

Bloomberg has taken too long to decide, in my opinion, and if he joins now he will definitely be a spoiler. I am seriously concerned at that prospect.

All of the US election machine manufacturers are GOP supporters. These are optical scanners and there are paper ballots backing them There will be a recount in NH, but I hear there are already custody issues about the original ballots.