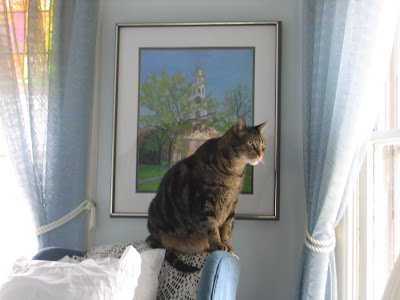 Baxter here. Yes, I know - you've seen this picture before. I must ask my Publicity Committee to take more pictures of Me, glorious Me. It is a Sin that they take more pictures of That Dog than of Me. But that's the way it is. Of course, as a Cat, I am not apt to sit still for a photo op; sometimes I'll pose beautifully in a most Adorable way, but when the Human runs and gets the camera, I will just suddenly turn over and completely ruin the Moment, or run off under the Bed.

I'd like to start today's Post with something a bit unusual and frivolous. It's a YouTube video, and it involves a Dog, and while as you know, I am not a fan of Dogs, this one is pretty amazing. A friend of my Female Human sent it to her and even I thought it was worth watching. I'll just post the link and you can check it out:

So, how about that Obama Human? He did pretty darn well in South Carolina, didn't he? 55% for Obama vs. 27% for Hillary. Of course, her Husband Bill likened his win to Jesse Jackson winning South Carolina in 1984 and 1988, implying that South Carolina wouldn't "count" since Mr. Jackson did not win the nomination that year (never mind that there are very few similarities in their candidacies otherwise). Dirty fighting, I say. But I guess that's the name of the Game when it comes to the Clintons. My Female Human has said she is disappointed in the way they are running their Campaign.

Me, I'm just a Cat, so I don't know a lot about this stuff, but sometimes when a Tomcat comes into the yard and starts fighting with the other Cats, the other Cats end up turning on him. Might be what was happening here. People who said that Bill Clinton's involvement in the campaign was important tended to vote 3 to 2 for Obama.

On top of winning South Carolina, Obama is also getting endorsed by Important Icons such as the Kennedy family. First, Caroline Kennedy put in a big plug for him on Sunday in the New York Times. Many Humans have been comparing Obama to the late inspirational President, including my Female Human, and now the Daughter of that Kennedy sees the similarity too:

"I have never had a president who inspired me the way people tell me that my father inspired them. But for the first time, I believe I have found the man who could be that president — not just for me, but for a new generation of Americans." And then her uncle, Senator Ted Kennedy endorsed Obama as well.

Things are really hopping for this Obama guy. Let's hope he can keep his cool as the opposition gangs up on him even more ruthlessly in the days leading to the next Big Catfight on February 5. And that he can live up to all the promise surrounding him. One thing that may work against him is the news that his former supporter Rezko has just been arrested.

Other news items that have caught my Eye as I scan the Internets include this one, which is good news for Animals. Apparently scientists have designed a glass chip that may replace Rats and Mice in the Laboratory. The chip, which has Human enzymes and cell cultures on it, can be used to test toxic substances, thus sparing the Rats and Mice "discomfort or death." Of course, we Cats will still be inflicting discomfort or death on Rats and Mice, but that's beside the point.

I was Disturbed to read on CNN.com that there is a large Manmade satellite that has gotten out of control and will crash to earth in a few weeks. What is even more Disturbing is that it could contain "hazardous materials," they don't know where it's going to come down, and the information is "classified as secret." Great...

Ending on a more Positive Note, the Super Bowl is coming up this Weekend and my Humans, as I mentioned last week, will be attending a Super Bowl Party without Yours Truly (or The Dog). It should be a good game. The Patriots Quarterback Tom Brady claims his Ankle will be fine, which is good, because who wants to win the Super Bowl with an Asterisk saying "Yeah, but the Patriots QB couldn't play because he had a bad ankle."

With that, I will wish you a good week and plenty of Catnip, because with everything leading up to the February 5th primaries, you're going to need it.
Posted by Mauigirl at 1/28/2008 11:44:00 AM

Wow, you are one well-informed cat! ;)

Thanks for the recap, Baxter. I hadn't heard about that satellite coming down; that is rather worrisome. I will need to read more on that....

This is a great technique: cat commentary by Baxter! Love it! I hadn't heard about the alternative lab news, so mahalo for sharing that bit. I too scan the net for interesting news, and this one gives me hope that they'll soon be sparing the animals the suffering.

Well, hi there Baxter ;D - nice commentary. I'm sure glad you'll keep the rat and mice population down if they start using that chip in the labs. But tell your lady Human that I'm still not sure about Obama - I watched the debate last week and noticed a slight tone of arrogance to him. I still think no matter what's gone on in the past, Hillary is the best choice.

Baxter sends his thanks for your comments. He's very glad to have been informative.

Leslie, I hope he isn't getting arrogant; I didn't catch the most recent debate so will have to watch the next one. I would like to see both him and Hillary not snipe at each other. We shall see how it goes on Feb. 5th. I will support whoever wins the nomination, come what may!

For a cat who claims to know nothing of these things, you sure covered the gambit.

I think Barack is the wrong guy for the times, as his record of Senate votes is indistinguishable from Hill's.

Having said that, the Clintons played the race card to great effect, if you look at how quickly support for Barack among whites dropped in the closing days. It's a despicable trick, worthy of the term "Klanservative."

My human, Hill, sends her regards.

Please tell Mauigirl that Hill FINALLY got around to blogrolling her.

That was SO LOW of Bill. I'm very disappointed.

Well I am always happy to see Baxter posting... Especially when I have not been around for awhile.

That satellite thing has me concerned, with all that is going on I did not know that.

Larry, Baxter does his best to keep informed. He uses the computer a lot when I'm at work, I believe.

Jolly Roger, I know that Barack and Hillary have similar voting records. But they are the choices we seem to have, and both of them would be 100% better than any Republican in November. So when it comes down to a choice between the two of them I'll take Obama since he has more vision - whether he can put it into effect will have to remain to be seen. I think Obama did jump in too soon - but he probably knew that if he didn't, he'd have to wait 8 more years. But he's here now and I am just having a hard time supporting Hillary. I don't like the idea of the Bush-Clinton-Bush-Clinton era. And I wasn't all that nuts about Bill anyway when he was in office. I know some people thought he was great, but he really blew (no pun intended) his second term. And, I can't forgive the racial politics they're both playing. These people are all supposed to be on the same side. Their methods are not good for the party nor for the country.

Hey, Balless Bob! Good to see you here. I'll give Baxter your greetings. And thanks to Hill for adding me to the 'roll!

SM, I agree - it is very disappointing to me, as I mentioned above.

Hi Fran, Good to see you back! Let's hope the satellite falls in the ocean...

Hi Baxter!! On the photo ops, you need to cooperate with humans to get your picture taken. By rights, they should feel privileged to follow you under the bed with the camera, but they can be most unreasonable, not recognizing that the true hierarchy in the household is cats-->humans-->insects-->bacteria-->dawgs.

Tomcat, thank you for your comment on my Blog. I will keep this in mind next time the Humans get out their Camera. I suppose we Cats have to put up with this sort of thing being the Superior Beings that we are. You are so right about the household Hierarchy.
-Baxter

That is a lovely photo of you, Baxter. Thank you for keeping me up to date with the election news. I'm pleased to hear that Obama has some big-hitters on his side. I don't know much about politics but he has a kind face; I bet he likes cats. (And dogs.)

Yes, Baxter, those humans sure are a funny species. Let's hope they evolve soon.

Baxter, you're most welcome. Keep the tail held high!