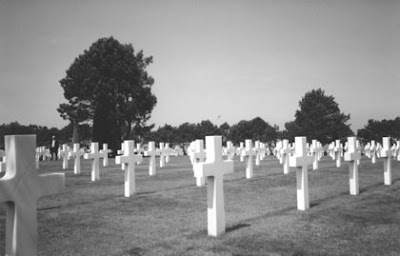 "...They shall not grow old as we that are left grow old;
Age shall not weary them, nor the years condemn.
At the going down of the sun, and in the morning,
We will remember them."

Today is Armistice Day, as it was once called. Nowadays we call it Veterans Day. But originally it was created to celebrate the end of World War I. Of course, back then they didn't know it was World War I.

World War I tends to be the forgotten war, the one that happened so long ago that we don't think about it much anymore. At the time, "The Great War" had been called "The War to End All Wars." But only a generation later, the horrors of World War II eclipsed the memories of that war. Then came Korea, Vietnam, the Gulf War and now the War on Terror, as George Bush refers to our invasion of Iraq.

Armistice Day was originally created to commemorate the end of The Great War. (Major hostilities of World War I were formally ended "at the 11th hour of the 11th day of the 11th month" of 1918,with the German signing of the Armistice.) Later, here in the United States, it was changed to Veterans Day to honor all veterans. World War I ended nearly 100 years ago; the last veterans are dying and soon there will be no one alive that personally remembers the war at all.

Today Memorial Day (originally called Decoration Day, since people were supposed to go decorate the graves of veterans on this day) has largely outshone Veterans' Day as a holiday. It is more conveniently situated at the end of May, during nice weather, at a time of the year that traditionally kicks off the summer season with barbecues and outdoor revelry. Like Veterans' Day, it was originally started to commemorate those who served in a specific war - the Union army during the Civil War - and then expanded to honor all veterans.

Veterans' Day largely loses out, being in the somber month of November, when people are deep into their work or school years, are starting to think about the upcoming holidays, and not really focusing on remembering the veterans. Many businesses no longer even honor this day as a holiday.

So today, let's take a moment to remember all veterans, and in particular, those long-ago, long-lost veterans of World War I. In honor of them, here is Lt. Col. John D. McCrae's poem:

In Flanders fields, the poppies blow
Between the crosses, row on row,
That mark our place; and in the sky
The larks, still bravely singing, fly
Scarce heard amid the guns below.

We are the Dead. Short days ago
We lived, felt dawn, saw sunset glow,
Loved, and were loved, and now we lie
In Flanders fields.

Take up our quarrel with the foe!
To you from failing hands, we throw
The torch - Be yours to hold it high!
If ye break faith with us who die
We shall not sleep, though poppies grow
In Flanders fields.

(Thanks to Kim, whose post on Remembrance Day, as it is known in Australia, reminded me that today is indeed November 11! Check out her blog and see her wonderful portrait of her family members who died in World War I).
Posted by Mauigirl at 11/11/2007 01:31:00 PM

I went over to the Wall today because they were having all sorts of memorial services. I cry everytime I go, but today was really moving.

Thanks for the little history lesson. In Hawaii different community organizations make sure that all of the graves in the veteran's cemetaries have fresh flowers or leis on them for Memorial Day, I am not sure about Veteran's Day.

I watched on tv yesterday as cheney placed the wreath at the unknown soldiers tomb. I felt nothing but disgust as I watched that horrid man get anywhere near that sacred place.

It's good there are ceremonies being held for Veterans Day. I'm sure the flowers on the graves for Memorial Day in Hawaii are beautiful.

DCap and PoP, I agree - people like Cheney and his ilk shouldn't be the ones doing any of the honoring of these graves.

Bush, Cheney and the GOP didhonor our vets by witholding their rightly earned benefits.

Even during Vietnam, I follow the pronciple of supporting the warrior, while opposing the war.

The President didn't even bother to honor our Vets this years.

Those who dishonor the Veterans are those who wrongfully force them into war.