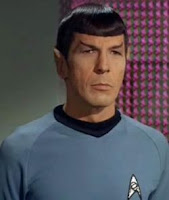 I was on a forum that I read from time to time and someone posted the following link, which takes the idea from LOLCats and makes it into a Star Trek episode - one of my favorites, from the Original Series, The Trouble With Tribbles."

This link will first explain the LOLcats idea and then it goes into a complete set of stills from the famous Trek episode, but with funny short captions in the style of LOLcats.

It pretty much sums up the whole Tribble story in its own weird way! Enjoy!

I became a Star Trek fan in the last year of the original series' three-year run. I had seen it once before at a friend's house but didn't start watching it regularly until that last season. I immediately became addicted and then when it went into reruns, my friend Debbi and I faithfully watched every episode over and over again, after school, usually at her house, while consuming vast quantities of crackers with peanut butter.

We usually got to her house before Star Trek came on and watched the end of "Lost in Space." Then Star Trek would come on and we'd watch it raptly. We knew every episode, knew the names of the episodes, and could recite the lines along with the show.

We both went on to see the movies, follow ""Star Trek - Next Generation", and after that, "Deep Space Nine," "Voyager," and "Enterprise." Did I forget any?

I have to admit, for me, there never was a Star Trek as good as the original series, as hokey as it sometimes was, with the most unbelievable special effects. The original Star Trek was an allegory for every current event Gene Roddenberry could work into the stories.

"A Private Little War" was really about Vietnam. ""Let That Be Your Last Battlefield" explored racism by pitting the two surviving members of a planet's population continuing an age-old race war. They were both black on one side, white on the other - but on opposite sides. The Enterprise crew saw them as the same, but they saw each other as irrevocably different.

There were episodes about mutual destruction and war and various other themes; about people escaping reality, even about some 23rd century hippies who were found to be carrying a virus that was caused by the artificial environment they grew up in. Now we have people who are allergic to the chemicals in buildings with windows that never open, a similar phenomenon.

Star Trek's creators imagined many miracles of modern technology well before they existed. The "communicator" is our cell phone today; the Tri-corder, a Blackberry with scanning abilities. The imagined 23rd century had computer diskettes which are probably akin to today's flash drives and portable hard drives. But remember, back in 1966 they didn't have anything like that. Star Trek had computer terminals on people's desks. Computers that talk. They're all happening now. None of them existed in the 1960's.

Star Trek inspired a whole generation of scientists to invent many of the things they saw on their favorite science fiction show when they were growing up. Much as Jules Verne may have been the inspiration for the nuclear submarine, Star Trek shaped a vision of the future we are still trying to reach today.

We still have not invented warp drive, the transporter, or the holodeck (the one really good invention from Star Trek - Next Generation).

We have also not yet achieved Gene Roddenberry's vision of a future where the Earth is all one people, with true equality of the sexes, and respect for "infinite diversity in infinite combination." But because the creator of Star Trek once dreamed of that vision, perhaps one day it will become reality, as so many other visions from Star Trek already have.
Posted by Mauigirl at 5/10/2007 11:32:00 PM

I remember Lost In Space and have watched quite a few Star Treks. I like the film when they had to go back to earth to save the whale...can't remember what it was called. My meme is posted now that you tagged me for...have also tagged you back on another one.

Hi Ruth, will check out your memes!

The Star Trek movie you're referring to is Star Trek IV. I forget the official title of it but that's my favorite of the films as well.

Hee. I'm glad you liked it.

(btw, this is my blogger/delphi nick. I'm Dira)

Hey Dira, thanks for stopping in! I'll check out your blog as well!