A Day in the Country

Today dawned sunny and hot. Well, I can't really say what it dawned, since dawn is a time I do not see unless I was up all night. However, it was hot by the time I was up and DH and I were taking Diva for her morning walk.

It was hot yesterday too, and we had gotten out her swimming pool so she could cool off. Yes, Diva has her own swimming pool. It's one of those blue plastic ones for toddlers that don't need to be inflated; you just fill it with water from the hose and it's ready for action.

When we got Diva we felt bad that she no longer would have a swimming pond as she had up at the Animal Farm. So we were delighted when someone on the next block threw out a discarded kiddie pool. DH snatched it up from the curb, brought it home, and dug up a piece of flat rubber to put over the hole in it so it would fill up. Diva loves jumping in it to get her ball. Sometimes if you throw the ball and it lands close to the edge, she tries to just grab it while still standing on dry land. She looks exactly like someone bobbing for apples. The water gets up her nose and she sneezes and tries again and again. Finally the ball will drift into the middle and she'll end up jumping anyway.

This picture is courtesy of the nice professional photographer who took Diva's pictures for the 2007 Unexpected Pit Bull Calendar for her "Miss July" centerfold. If you click on "Gallery" in their website you can see more pictures of Miss D. 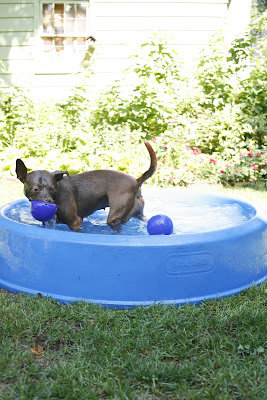 We don't have our own picture of Miss D in her pool. We could have taken some pictures today except for one small thing: There are no batteries in our camera. Why not, you may ask? Because DH bought himself one of those radio-controlled airplanes a few weeks ago and used the camera's batteries for the plane rather than for the camera. So the next time I tried to use the camera, it did not work. The plane did not come with batteries, and it required the fancy kind that came in the camera. The rechargeable, expensive ones.

Of course, the very first time DH tried to fly the plane, we took it to the park thinking there would be plenty of room there. In the first flight, the plane swooped around the open field grandly before flying directly into a tree and breaking apart. DH put it back together and tried again. This time it flew madly about until it was attracted inexorably to another tree on the other side of the field, where it promptly got stuck just like Charlie Brown's kite. DH had to go home and get his long-handled clippers that he uses to cut branches off trees in our yard, and coax the plane out of the tree. It was a close call, since that particular tree was on the very edge of the stream that runs through the park and the plane easily could have landed smack in the middle of the water.

But I digress. What I really wanted to tell you about was our day in the country (hence the title of this post). We have a friend who turned 50 recently and today was a big party in his honor, held at the home of his aunt in Pennsylvania, just outside of New Hope. We rode down with our other good friends and their daughter to help celebrate the birthday.

The party was a barbecue/picnic and included friends and relatives of all ages. The house itself is a 300-year-old restored farmhouse, one of those wonderful old German stone houses that you often see in this part of Pennsylvania. It even has many of its original outbuildings - old stonework barns and an outhouse and a smoke house. The original part of the house was built in 1702, and an addition about 100 years later. Some of the outbuildings were built in Colonial times, in the mid to late 1700's.

The farm itself is about 75 acres and both the house and the land are preserved forever, as the development rights have been sold as part of an open space program so that no one can ever use the land for anything but farmland. The town has preserved a great deal of their farmland in this way - our friend's aunt was telling us that they voted three times to add more money to the funding for this purpose. She and her husband were instrumental in starting the program.

We arrived at around 2:30 and didn't leave until after 8 p.m. when the dusk was falling and the kids were lighting sparklers that someone had brought. In between we sat in the back yard, watching the children of various ages running and playing, listening to the music, enjoying the food.

There were fresh, just-picked strawberries from a neighboring farm, burgers and sausages, and various side dishes that everyone had brought. There were three cakes for the birthday celebration. Despite my original plan to try to lose weight over the weekend, I know it just isn't going to happen. Not after eating two pieces of awesome carrot cake and a piece of wonderful chocolate cake, both homemade.

The farm is only partly used for farming these days...they grow hay and also, for their own use and that of their friends, a mixture of vegetables, including corn, tomatoes, beans and eggplant. We took a walk around the garden section and meandered around the house looking at the old stone foundations and walls. The kitchen was redone not long ago but old beams from a barn were used in the ceiling so the kitchen fits right in with the rest of the house. The original huge fireplace is still there, with its 300-year-old wooden beam across the top.

While sitting outside looking over the group of people enjoying the day, I could easily imagine the various generations of people who had lived and loved in this house and farmed this land. There were trees that were young when the Revolution took place, with gnarled branches stretching out from wizened trunks that were probably 15 feet in circumference. There were old hand built stone walls surrounding the yard. And we were told that there once was a cellar that hid runaway slaves during the Civil War, now paved over.

When the time came to leave, it was hard to go. But it was getting dark, the mosquitoes were coming out, and we had to get home to feed our dog. But it is nice to know that such a place still exists and that it is being taken care of so well and enjoyed by so many.
Posted by Mauigirl at 5/27/2007 12:31:00 AM

It sounds like you had a great day. What a fabulous place to live.

The amount of rain we've had the last couple of days would fill a paddling pool I think. Very envious of you being able to spend a day outside.
Rx

Liz, it really was wonderful - wheneverI go out into the country I wish I could live there.

Ruth, so sorry your weather has been awful. I think you said you had a holiday weekend as well so I'm sure it is disappointing many people in our area!

After reading this great account of a good day well spent, I have the more than sneaking suspicion that you told your husband more than once where he could go fly his plane!! Such a missed opportunity for the camera! Shame, but your words conveyed it all & brought it to life beautifully.

LOL, I didn't really have a problem with him flying the plane; at that time I didn't know he'd taken the batteries out of the camera for it!

I love the picture of Diva in her pool. I haven't seen those hard plastic kiddie pools in town but I will look harder now. I have 3 dogs who I think should like it, but they don't like taking their baths so I don't know!

I don't think baths are the same to dogs as going in a pool for fun. Conversely, our old dog loved baths but hated going in regular water. I guess warm water was one thing, cold water another! If you find one it can't hurt to try it! Diva loves swimming so we knew she'd like this.