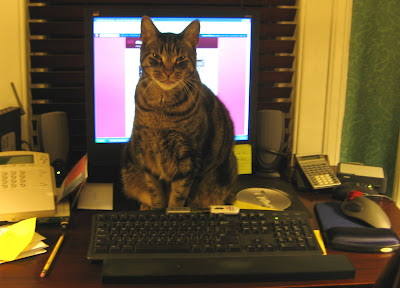 Baxter here. Here I am getting ready to help my Female Human in her Blogging. As you see, I am doing a Great Service by covering up the screen of her Blog with my Beautiful Presence.

I look a bit dyspeptic in this picture. It's either that I ate something that disagreed with me, or perhaps it's because of these poll results, which show that McCain would beat either Democratic Candidate in November if the Vote were today.

Must be all that Nasty Catfighting that's going on among the Democrats. Personally, I am a Cat of Peace; although I do Growl at That Dog from time to time, that is Different. She is of a Different Species, and it is Appropriate for me to Growl at Her. But with two Cats who are the Same Species, after an initial Hiss or two, they should Calm Down and learn how to Get Along.

Some Humans have suggested that Al Gore should come in and Save the Day for the Democrats. If neither of the Current Human Candidates can Win, then why not Bring Back Al Gore? Gore-Obama?! A Ticket to Paradise? Or at least a lot of Catnip for the Democrats?

But, as an Enterprising and Resourceful Cat, I have done Further Digging on this idea. Apparently the Voters aren't all that Enthused about it. Only 23% of Democrats in a recent poll would vote for Gore.

On the Plus side, more people say Voters aren't ready to vote for someone Over 65 than say the same for an African-American or a Woman. Bad news for John McCain!

In other news, the FBI finally has some new suspects in the 2001 Anthrax terrorism incidents that followed 9/11. It's been 6-1/2 Years. Can we have some Closure here?

And, I couldn't help but Notice this bit of News: A British woman just gave birth to her 10, 11 and 12th Surrogate Children. Yes, 3 of Them. They were Triplets - and she gave Them all to the Childless Couple that she bore Them for. This poor Lady has been Pregnant for most of the Past Decade! Now, she must be a Very Generous Woman to do All That for people she doesn't even Know. She does have two Daughters of her own. I wonder what You All think of Surrogate Mothers? Are they just Incredibly Generous People, or are they a Little Odd? (Female Cats don't mind Giving Birth to a lot of Kittens if they Must, but the Lady Cats I know are generally Happy to be Spayed and not have to Bother. Less Aggravation that way.)

Lastly, does anyone think that Airport Security is Getting Out of Hand? According to this report, the TSA Folks made a woman remove her Nipple Rings to get through Security. One with PLIERS. Ouch!

yes, time for all of the catclawing and fighting to end...too much for too long....

we should be focusing on McCain at this point....

thank you for all the news and snipptes..I feel smarter now..have a good weekend...

i tell you baxter, the animal kingdom is far far superior to the human one these days

Baxter, I love to sit on my human’s computer like that! Even when I am no blogging (I have my own blog, you know) the computer is so nice and warm.

Wait. In that story about the anthrax, there was no mention of anyone resembling our government's caricature of The Other. I'm confused!

I still haven't forgiven Gore for not fighting the stolen election of 2000 and for pressuring third world countries not to make generic versions of life-saving HIV drugs.

"Pull this plane over right now! These Nipples ain't just for show, they're loaded baby."

What is it with Wingnuts and Nipples?

Hello, Baxter. I do like your summaries. They help me understand what's happening in American politics.

Keep up the good work - and keep That Dog in it place.

Hi Enigma, thank you for visiting My Human's Blog and reading my Post. I would love to know your Xena; I too like to Sleep so we would have lots in Common!

DCap, we Cats have always been Superior to Humans but we try not to let on because the way it is now, Humans do everything for Us and if they knew how smart we are they might make us Work.

Christopher, you are Correct in your Conclusion. I try to Distract my Human so she will Pet me. But I also like to Blog.

Alex, you have a good Point. It is Warm by the Computer. I enjoy reading your Blog, keep up the good Work.

Randal, I am sure that will come next, blaming it on The Other. They are Working on it.

Libhom, my Human says she hasn't forgiven Gore for losing the 2000 election in the first place - if he had won his Home State, she says, Florida would not have Mattered. She agrees on your other points as well.

Fairlane, Wingnuts don't like Anything to do with Sex or Secondary Sex Characteristics. They would have a field day with Me - I have 10 Nipples! Of course, I don't have Rings in them.

Liz, I'm glad you like my Summaries. I do my Best to keep That Dog in her Place. Yesterday she chased Me but I let out a mighty Growl and she backed off!

This is Baby Mackie. Abby, Bonnie, Zeva and Zeke all say "Hi" too. All of us try your computer screen ploy, but Mr. Snave just keeps on blogging.

Mr. Snave also doesn't like the "catfighting" going on among the Democrats. He is starting to advocate something like an MTV "Celebrity Deathmatch" contest to determine the Democratic nominee, although he suspects the Clinton camp might come up with something truly nefarious... not that they won't anyway, "Deathmatch" or no.

You look pretty healthy! I have been having trouble with my thyroid the last year, and I have gotten all the way down to 11 pounds. I look like a normal cat, but the Snave family is used to seeing me weight 15-18 pounds, so they worry. I'm feeling o.k., anyway.

Mr. Snave told me he would vote for Gore, but that he thinks it is way too late for someone to come "riding to the rescue". He thinks that if Gore would have gotten into the race with any chance for success, it needed to happen about a year ago. To do it now would give the Democrats the appearance of having no direction whatsoever, and as long as Obama and Clinton bicker (and as long as Clinton stays in the race) it looks increasingly like the party has no direction, especially when the Old One has no opposition and continues to solidify his party.

Mr. Snave is 50, but McCain is still old enough to be Mr. Snave's dad. Mr. Snave says that as he gets older, he is much less likely to vote for someone old enough to be his dad. Mr. Snave knows how his 50-year-old mind and body feel after a long day's work, and he can't imagine what kind of toll being president would take on somebody who is going to be 72 on August 29 and who would therefore be 76 by the end of his term. I call Mr. Snave "ageist" for this, (I am about 72 in cat vs. human years, after all) but he just tells me to **** off. He does tell me that in a friendly manner, at least.

Snave,
Thank you for your excellent Comment. First, let me express my Sympathies for your Thyroid Condition. I'm glad you are feeling Well anyway. My Humans are more concerned that I am too Plump!

My Humans also agree that the Old Human is Too Old to be President. They are both in their 50's and can barely make themselves go to Work and earn Money to buy my Cat Food. They can't imagine being President at their age either, let alone in 20 Years.

Hi Baxter! Hopefully the Dem humans will pull together eventually. I agree that the poor poll results reflect disgust over the squabbling.

On the TSA incident, may the Lord protect us from loaded boobs!! How ridiculous!!

Baxter - I love to see your face on this blog!

And that bit about the nipple rings, ouchie!

Our country has gone kind of crazy, like totally crazy, hasn't it?

Yes Baxter, that John McCain fellow is just way too old. He keeps missing the litter box, and when somebody puts down some catnip he just stares blankly at it. And he meows all night long, with sort of a lost "where am I?" sound. And yet he wants to be the Alpha Male? Don't think so.

Just one serious note . . . my niece was a surrogate mother for a dear friend of hers who could conceive but not carry the baby. So this very special and giving lady carried twin boys (after having three boys of her own) and gave birth to a very happy and grateful family.