Views of the "Intrepid"

I have finally gotten around to a) taking pictures of the new deck (now known as the Intrepid from my first view of its size when we returned from vacation and discovered it was bigger than we expected) and b) DH has finally downloaded them.

So without further ado, here are a few views of our new deck now that we've added a few accoutrements and furnishings. It still has to be stained (we've chosen a natural cedar color) but that won't be done until the treated wood weathers longer.

This is a view looking northward, showing the table and chairs we got for only $99 for the whole set (including the umbrella!). It came in one big flat box and its contents were made in China, probably by underage children in a sweatshop. I feel guilt, but not enough to have not bought the set. 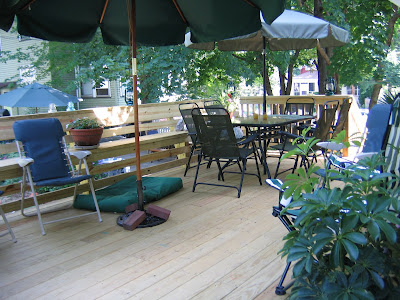 Here is a view in the other direction. 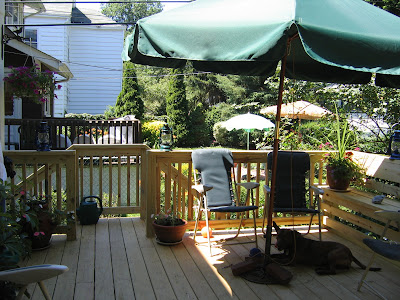 This view shows the built-in bench along the back rail. We got this idea from the cottages we stay at in Cape Cod. One of the cottages has a small deck overlooking the lake, and it has built-in benches like this. So when we had our carpenter build the deck we showed him a picture of the bench and he did it the same way for us. Note how much Diva enjoys "her" deck. 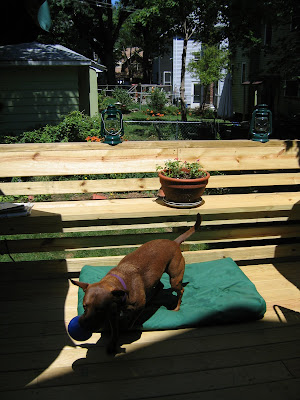 This is a view of the side steps - there are two stairways; one goes toward the front of the house and one to the back yard. 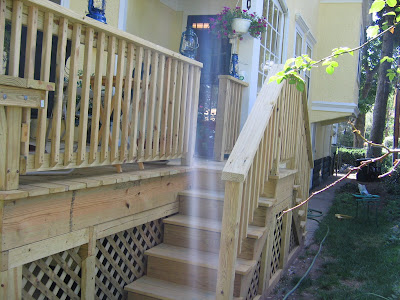 This is a view of the other set of steps which leads to the driveway side of the house. 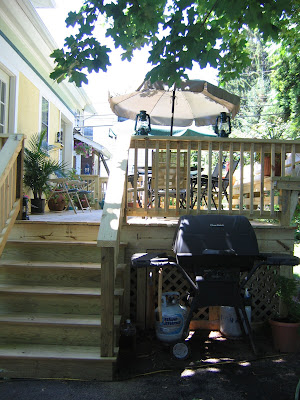 So that's our deck! We are really enjoying it and wish we'd done it sooner! It has become a little haven for us, sort of like an outdoor room. Every morning we come out and sit outside and have our breakfast, and we are eating dinner outside as well. We used to eat outside fairly often even when we had our patio (which was farther out in the back yard and was actually the defunct cement floor of a long-gone garage). But somehow once it got dark we were less apt to eat out there or sit for any length of time. Now that we have the deck it is a cozy spot for us, and mosquitoes are kept at bay by lighting citronella lanterns all around the railings.

It is hard to imagine that in a few short months there will be snow on the deck and we can no longer sit there. It's going to be an even longer winter than usual!

Nice deck, I could live on that, very peaceful.

It is indeed peaceful. I don't even want to leave it! My husband is starting to say things like "Can't we go out somewhere?" and the waitress at our local pizza place is asking our friends why we're not coming in anymore!

This is exactly why Evil Spock wanted to invade Jersey! To take over that deck!

It's beautiful and when christmas time rolls around you can put lights on the railings. The dog seems to feel right at home already. It's like adding floor space to your home, isn't it?

Wow, it is gorgeous! It looks like a true retreat. A place to recharge and gather friends together!

Evil Spock, you are welcome to invade Jersey and enjoy the deck!

Patricia, exactly, it's like another room. Good idea about the lights!

Tomcat, not only is there a 'dawg' on the deck, but one of our neighbor's cats has decided that we meant to build the deck for him. He has been sighted sitting on the railing and even - horrors! - sitting on our dog's bed!

Kirsten, we've definitely been using it as a gathering place for friends, and family too. I just wish winter never had to come!

You should feel blessed by the mere presence of the cat. ;-)