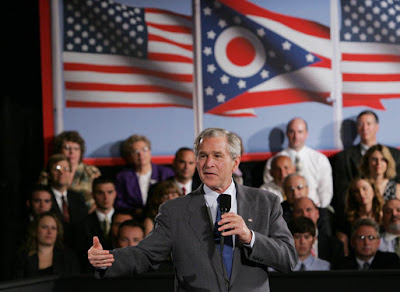 I know many people have already commented on this issue, but I just had to chime in with my own two cents.

According to the Chicago Sun Times and the New York Times, the White House said on Saturday that the President will veto Senate legislation to expand health care coverage for uninsured American children.

The measure, which has bi-partisan support, would provide revenue to be used to expand an existing program, The Children’s Health Insurance Program, which is due to expire this fall.

The purpose of the expansion would be to subsidize health insurance for those “with incomes too high to qualify for Medicaid but not enough to afford insurance on their own.” (Chicago Sun Times). The source of the revenue would be an increase in taxes on cigarettes.

But of course, President Bush is against this. After all, we can’t have higher taxes on cigarettes. That would hurt his friends in the tobacco industry.

Besides, according to President Bush, anyone in America already has access to health care. As he said:

Hellooo? President Bush? These are the children of people who don’t HAVE private insurance and can’t get it; either they aren’t working, or they have jobs with no benefits. And no one is saying that the government would be in control of health care. The government would help subsidize health insurance for these uninsured children, which is not government controlled health care at all.

(And what the heck is “private health”? Health that is only visible behind closed doors?)

Everyone knows that going to the emergency room for everyday medical problems is a terrible idea. It clogs up the emergency rooms, causing unacceptable waiting times for people with true emergencies; it is costly and inefficient. The costs are then passed on to everyone else. And worse yet, it does not provide preventive, ongoing medical care for the most vulnerable members of our society – our children.

The ironic thing is, President Bush knows this. Here’s what he said himself about going to the emergency room:

“The problem, oftentimes people go to the emergency room, which is very cost-inefficient. It costs the taxpayers money. The emergency room ought to be used for true emergencies, not for the primary care of health care -- primary health care for people who can't afford health care.”
(President Bush, speaking in Youngstown, Ohio)

So, you may wonder, why is the President so opposed to giving uninsured children health insurance? Here’s how White House Spokesman Tony Fratto explained it:

“The proposal would dramatically expand the Children’s Health Insurance Program, adding nonpoor children to the program, and more than doubling the level of spending,”Mr. Fratto said. “This will have the effect of encouraging many to drop private coverage, to go on the government-subsidized program.” (The NY Times, July 16, 2007).

First of all, how could the program “encourage many to drop private coverage” when the program would only cover those who don’t have coverage in the first place? Secondly, these “nonpoor” children are not exactly rolling in wealth. Not like President George W. Bush and his cronies.

For him to say that people can just go to emergency rooms for care shows how out of touch he is with the ordinary people in this country.

When Marie Antoinette said “Let them eat cake” when the people were begging for bread, she meant it; she wasn’t even trying to be nasty. She was so out of touch with her people that she didn’t understand that they did not have a choice between bread and cake. They only knew about bread. And they didn’t even have that.

Marie Antoinette paid the price for her ignorance. President Bush will probably never even understand the true cost of his own ignorance, let alone pay the price.
Posted by Mauigirl at 7/17/2007 08:37:00 PM

There are over 9 million children that Bush's arrogance will affect.

This then flows into 20 million American families who cannot afford to provide those 9 million kids healthcare.

George W Bush and the entire Congress and their families have the finest healthcare of anyone in America, paid for by the U.S taxpayers.

Isn't it time each American - man, woman or child be given the same healthcare as Bush?

After all our tax dollars are paying for it anyway.

Thank God Bush isn't king, or I would be one of the those standing at the ramparts calling for a Revolution.

The real strength of a democracy is it makes it unnecessary to lead a revolution because even the village idiot of a town somewhere in Texas only gets to be king for 8 years.

29% of likely voters believe “providing affordable quality health care” should receive the “greatest attention from the government at the present time.”

39% of likely voters ranked “making health care more affordable” as the “most important goal for the country and should receive the greatest attention in reforming our health care system.”
Uninsured

82% of likely voters believe “there are moral and ethical reasons for making sure everyone in the U.S. has health care. Access to health care is a matter of human dignity.”

71% of likely voters believe “the federal government should take financial responsibility to cover uninsured children,” and

51% “would be willing to pay more in taxes to help pay for health insurance for children.”

Why don't the politicians consider these thoughts of the people?

Larry, you're so right. And I think the reason Bush doesn't pay attention to what the voters think is that he doesn't care. He and his cronies only care about taking care of their own.

Loren, I'm with you - thank goodness he does have to leave eventually. I just hope the damage he's done is reversible, especially for our environment.

That's so ridiculous. I work closely with Medicare/CHIP program, and those that are a little above poverty that don't qualify make bupkis.

Frikkin' tobacco industry is more of a drain on taxpayers money when it comes to healthcare.

"The art of leadership... consists in consolidating the attention of the people against a single adversary and taking care that nothing will split up that attention."

"He who passively accepts evil is as much involved in it as he who helps to perpetrate it. He who accepts evil without protesting against it is really cooperating with it." Martin Luther King Jr.

Never stop speaking out, with the mess we have in Congress, that's all we have left.

Evil Spock, you are so right.

Larry, good analogy. The Bushies have been playing that game all along, trying to distract us from what they're really up to. Just like Hitler.

I saw Sicko on Tuesday. I'm a small business owner who has never been sick (hold on while I knock on wood), never even used my medical insurance beyond the deductible since I got my own in 2002. I had no idea.

My 50 year old cousin does not have health insurance. He got a tumor on his kidney. They removed the tumor (and the kidney), but would not do chemo because he didn't have insurance. It metastasized to his brain. Again, they did surgery and some radiation, but no chemo.

Now he is just waiting to die.

How scary is our health care situation!

I know your post was about health insurance for the kids, but...oh, Canada looks good right now. Even if it is colder up there.

Mauigirl, I guess all be the odd man out here. Good as it sounds, this was a feel good measure for politicians to give them an excuse for not doing the right thing.

I'm 100% for health care for children, but any smoker with an Internet connection and a credit card can legally avoid the tax by buying cigarettes abroad. That leaves the burden on people too poor for Internet and credit cards.

Health care is too important for providing it to be left to HMOs and insurance companies for whom profit is more important than health. Any bill that does not provide health care for all Americans is not acceptable.

Elizabeth, what a tragic story about your cousin. So scary, it could happen to any of us if we don't have insurance.

Tomcat, I agree, the ultimate goal should be to insure everyone, not just uninsured children. I would guess that perhaps those who support universal health care thought they could at least get more children insured, with the idea of expanding it at some future date. And I see your point about the cigarette tax - it is a regressive tax. How about...let's take some of the money they are wasting in Iraq and using that to insure kids?

If Congress really cared about then people, they would take the $2 trillion wasted in Iraq, and
use it to provide the same healthcare coverage to every American, that they and their families enjoy.

I agree with your comments on Bush.
His arrogance about CHIP and other programs for those in need is disgusting.

Mauigirl, that would be an improvement over taxing the poor to pay for kids health care, with the caveat that accepting halfway measures is the best way to ensure that we will never get universal health care for all.

Jon, thanks so much, I'm glad you enjoy my blog. I just checked yours out and I love your gardens and your photography. Beautiful!

Tomcat, you are right, we need someone with the courage and the conviction and clout (three c's there!) to get some kind of universal coverage passed. I'm still waiting to see who that may be...

The closest person I know to that is Michael Moore.