Every Cat Has His Day

I was just cruising around various blogs and came across a whole bunch of cat blogs. They are mostly blogs written by the cats themselves rather than the owner of the cats. Some cats know how to spell, others are more challenged in that area.

Here is a link to the one I had first found - Jeter Harris. Mr. Harris is a tiger cat from New York City and is a huge Yankees fan. He has tons of links to other cat blogs in his links list.

This plethora of catdom made me realize I had been neglecting my very own cat, Baxter. I have hardly even mentioned him, even when he has often been sitting solidly in front of my computer screen, and moving the mouse around by rubbing his head on my hand as I try to type.

And who gets all the pictures posted on the blog? The dog.

Baxter is highly affronted that I have ignored him all this time. After all, he was here first. He was an only pet for the 2-1/2 months after Alice died and before we got Diva. And he liked it that way. He has still not totally accepted Diva's existence in the house and finds it annoying every time he realizes she's still here.

If she so much as comes near him, he growls. If she gets too close, the growl escalates into the "ROWWR" noise. Anything further, and it is the hiss. Which only gets Diva excited. She thinks he wants to play, so she starts hitting at him with her paws. This does not go over well with Baxter and he usually takes off at this point, giving the dog a chance to chase him until he goes under a bed somewhere and escapes.

Luckily, once the dog is asleep, Baxter knows he's safe and can come in to the room and cuddle with us. He also sleeps on the bed with us and the dog.

At any rate, in order to appease Baxter's pride, I am now going to post a few pictures of him so you can see him in all his glory. He is very large, about 17 lbs.; and he's big, not fat. I like to say he's "big boned." 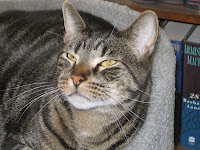 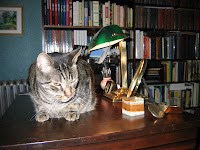 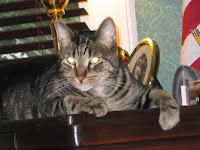 Oh love that cat !! I have same one, mine got sun sick or something hahah Use to be outside for the whole week now he is only inside!

Anyways thank you for your comments on www.hawaiib.com :) love it

Thanks! Our neighbor has one that looks just like ours as well!

Will be visiting your Hawaii blog frequently!

I have so many brilliant pictures of Margarida, the top model in this house. I never get around to sorting them into her album, or posting them anywhere.
As for these cat-blogs, the one I can never quite get over is the Dutch one "Cats that Look Like Hitler". It has a huge cult following, it is that Dutch sense of humour, but I have seen terrible raging arguments from the people who can't see what's funny about it.