A Cat's Eye View: In it for the Long Haul 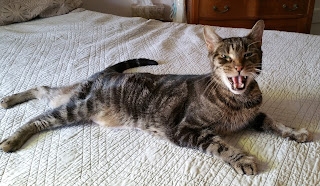 Baxter here. I am Complaining because there are Too Many Republicans. Here at My House, we were Thinking of Maybe watching the Republican "Debate" but in the End could not Bear to do it. How can there be any Sense made out of ten people answering Stupid Questions for Two Hours. What kind of Substantive Conversation can be had?

The Worst Thing is, there isn't even One Candidate that would make a Good President out of the Bunch of them. I don't know What this Country is coming to. And I think those with No Support Whatsoever (I'm looking at YOU, Chris Christie!) should Drop Out and let the other Bozos get more Air Time so Everyone can see what Idiots they all are.

Then on the Democratic side, there is the whole Hillary vs. Bernie Problem. Hillary supporters say Bernie can't Win so people should be Rooting for Hillary. They say don't Waste Your Vote on Bernie because he Can't Win. Bernie supporters, on the Other Hand, say Hillary is as Bad as the Republicans and if you Vote for Her you are as Bad as a Republican too.

Neither of these Opinions are True, in My Own Not-so-Humble Opinion. Why not Wait and See who Wins the Primaries? If you really Agree with Bernie, vote for him in the Primary. If he doesn't Win and Hillary is the Nominee, then vote for her in the General Election. Isn't that Simple? Oh, you are one of Those who say Hillary is no Better than a Republican? Have you SEEN who the Republicans are? Do you KNOW what they Believe? Check out this link.

You will see their Views on Many Subjects are direct Opposites of Hillary's OR Bernie's, especially when it comes to Family Planning and a Woman's Right to Choose. Check out their Views on Energy and Oil and Alternative Energy Sources. Compare their Civil Rights records and their Views on Global Warming. If you are a Democrat, you will realize there IS a difference between the Parties and that Hillary's views are a Lot Closer to Bernie's than You May Realize.

Then Keep in Mind that there will No Doubt be Supreme Court Appointments to be made in the coming Presidential Term. If Hillary is the Democratic Nominee and you Stay Home or Write in a Candidate You Prefer, then if one of these Republican Candidates wins the Election, you will have Only Yourself to Blame if we get a Completely Right Wing Supreme Court as a result.

Me, I am in it for the Long Haul. First, let's see who Emerges among the Republican Crew as the Actual Nominee. Then let's see who the Democratic Nominee is. And then things will Get Interesting. Right now it's all a Big Show.

Those who say Hillary is no Better than a Republican? Have you SEEN who the Republicans are? Do you KNOW what they Believe?

Absolutely! I got into a short debate with a Bernie fanatic a couple of days ago. The dude had completely lost all perspective. Frankly, I'll admit, I harbor some doubts about Bernie's ability to win a national election but if he's the nominee I'm voting for him. Sadly, my doubts were enough to have me marked as a "Hillbot" who this guy equated with being a republican.

I think you nailed it Baxter. I'm with you across the board....Glad you got your humans in order and they will vote appropriately...You run a tight ship there my friend...Give a purr out to Diva and Angel!

Baxter--it has been my experience that all cats are exceedingly wise. You have borne that out in this blog.