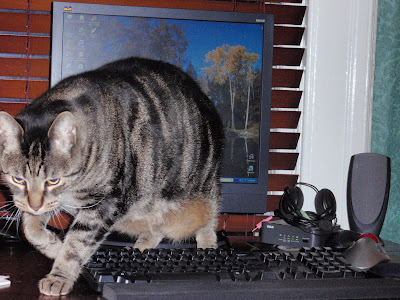 Baxter here. I bet you didn't realize it, but I can actually Type with my Back to the computer. Aren't I Talented?

It's been Awhile since I Graced this Blog with my Presence. It's certainly not My fault, though. My Humans keep going Away and Leaving Me here alone, and it puts Me in a Bad Mood and I don't feel like Blogging. But I thought it was About Time I put My Two Cents' worth in. So here I am.

First of All, this whole Debt Ceiling Debacle is just Ridiculous, in This Cat's Opinion. I have never seen such Folderol in my Life. Here President Obama is willing to give the GOP practically Everything they want, including Cuts to Medicare and Medicaid - much to the Dismay of his Supporters - with the small catch that they have to Agree to - horrors - some Revenue raising! And we're not talking about a Huge Tax Increase here. We're talking about getting rid of Loopholes, and Oil subsidies, and taxing things like Corporate Jets.

But no. The Republicans have all Signed some kind of Pledge not to raise Taxes NO MATTER WHAT, and they are Cutting Off their Noses to Spite their Face. I have never seen such Stubborn Humans in My life. They're Stubborner than a Cat being stuffed into a Cat Carrier to go to the Vet. (And believe Me, that's Stubborn. Getting Me into my Carrier is a two-human job!).

However, the guy who got them to sign the Pledge did leave some wiggle room for the GOP to let the Bush Tax Cuts expire and not have it "Count" as a Tax Increase. Perhaps that is the Way this can still be Solved and the GOP could Save Face. Time will Tell. (Seems to Me I remember another President who said "No new taxes! Read my lips!" and he raised Taxes, because he had to. And he didn't get Re-elected. So this might work out for Good in the End if the GOP loses some Seats in the House or Senate as a result of any Agreement!)

So, I am crossing my Paws and hoping for Some Kind of Resolution before the Debt Ceiling goes up and turns the Country into a Pawn Shop of some kind. I'm not quite Sure what would Happen but it isn't Good. They say a deal may be Imminent, but I'll Believe it when I see it.

Seems as if there isn't much else New to talk about these days. It's Hot. Very Hot. My Humans aren't even Outside on the Deck today, as they usually like to be in the Summer. I'm just as Glad, because that means they are Indoors with Me, which of course is a Better Place anyway. I'm hanging out in the Air Conditioning upstairs, and am Quite Comfortable. I think I heard my Humans talking about going to see the new Harry Potter movie later on. That may Cool them Down nicely.

Baxter--once again you demonstrate that cats indeed are the epitome of intelligent life on earth.
Humans? not so much.

Baxter, I wish I understood why many cats appear to dislike the carrier so much! My own Daniel just now, after years, decided he would not shred my husband anymore when he tries to put him in the crate.

Tell your humans to enjoy that A/C. It's the only way to go in summer!

Had a thought on this Kabuki theater on the debt ceiling. Maybe it's all about getting the interest rates up because right now they are about as low as they can go. With interest rates so low, the rich aren't making any money buying the government debt.

Even the NFL will get a deal done before these two camps of jokers. No offense to actual jokers, you make a fine addition to a deck of cards.

Baxter, it's great to have you back!

Thanks, all. Baxter appreciates your comments and of course agrees with the praise that some of you have heaped on him.

Kulkuri, I agree, they have to have an ulterior motive. Of course, do they need anything more ulterior than trying to make the economy crash so Obama won't be reelected?

Randal, you are probably right about that. As for the jokers, agree - I always loved getting one of those in my hand when I used to play poker with a group of friends! :_)

You got my vote!

Do you think any of these politicans (Democrat or Republican) have our best at heart.

I have hope still...but it is slowly fading.

Nice job on the Back-Paw Typing, my furry acquaintance. Mr. Cat seems duly humbled, and just mumbled something about practicing when he's alone (I hope he meant typing! )

Yeah, this debt-ceiling mess is nothing more than poseurs in drag, and it's draggin' us all down. I'm urging our President Person to send them all to Time Out (or the litter box) and handle it himself.

Mr Baxter has more brains than all the Republicans put together. My only problem is that their disease seems to be communicable.

Why do they talk of cutting social programs and never about cutting military spending? 750+ permanent bases already and 3 wars. It's nuts. I think I'll go find a cat to talk to.

Baxter, several days later and still stiffling, at least out here on the plain Plains. 106 yesterday and today. And the heat ain't helping my disposition regards the events of the last two days. Teabagging retards cowed the rest of us into submission and still no talk of taxing the blood suckers. I am going to be hot long after it cools down.

Baxter I have checked out your blog.It seems very nice to me.Hope you will continue your great job.Thanks

S.W., thank you for your thoughts! I've just been remiss on blogging. Luckily we were unscathed by the storm here in NJ. However, we're heading up to our cabin in the Adirondacks and hope a tree has not fallen on it!

“Our Pictures Sell Properties”
virtual tour 360
in this u will surely ficcnd out some imthaibeautyproducts.blogspot.comportant tips.