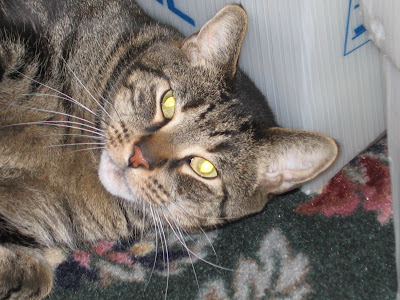 Baxter here. I am finally able to Blog again. My Humans have been Hightailing it off to That Place they call The Cabin so many times I haven't had my Time to Blog and I am Quite Annoyed. So much News has happened since I last posted that I just don't see how I can Catch Up. However, I will try.

First of all, how could even I ignore the Death of Michael Jackson. It is truly the Gift that Keeps on Giving for those News Programs. One breathless account after another. First, he's Dead! Oh My God. Then, why? Why did he die? We still don't know. So it will continue to Fuel the Controversy and Morbid Curiosity for a couple more weeks until we find out the results of the so-called Toxicology Tests. As a Cat, I'm not quite sure what it's all About, but something to do with Too Much Catnip I guess.

Personally, I can't Imagine any Cat being so Notorious as to generate that much interest among Fellow Cats. Sure, we are sad if one of our Number goes to that great Catnip Field in the Sky to be with Ceiling Cat. But hey, that's Life. Or Death. Whatever. We don't make a Big Deal about it. Oh well, Humans are different from Cats I guess.

Moving on. President Obama's approval rating among Independents is starting to Slide. It's hard to tell whether It's the Economy in General or his handling of Things that is disappointing them. There has also been a Lot of Outcry among Liberals and the LGBT Community about his not Keeping Promises he made during his Campaign. Personally, that bothers Me more. The Economy wasn't Broken in six months and won't be Fixed in six months. But some of his Promises could be Kept very quickly.

Be that as it may, it is not unusual for a President's approval level to Wear Off a bit after the inauguration. That's why they talk about a Honeymoon Period. I guess his is over. Let's see what Happens next.

On the Plus Side, President Obama is in the midst of a worldwide Trip which should help distract Folks from some of the other Stuff that is going on. He met with Putin in Russia, the Pope in Italy and is now in Africa. Thank Goodness we now have a President that people abroad actually Respect.

Well, what else has happened since I last Spoke to You? Oh yes, the whole Sanford thing. The guy who Up and Disappeared from his duties as Governor of South Carolina to be with his Mistress in Argentina and then got caught on his way home. It's not so much the Sin as the Hypocrisy and Stupidity, in My Opinion. We Cats are not known for our Faithfulness, but then again, we never Profess to be all Honorable and Goody-Twoshoes about Sex. But this Human did Profess to be all Upstanding and Moral. Then he thinks he can Get Away with running off for five days without anyone knowing where he was. Hello? You're the Governor? Someone might miss you? Sheeesh.

Speaking of Republican sex scandals, I won't get into the Ensign thing but just in case you want a little Help in figuring out Who did What recently, TPM posted a nice chart to help you Keep Track.

And of course there was Sarah Palin quitting being the Governor of Alaska. (Things having to do with Sarah Palin always seem to Happen when my Humans are in the Adirondacks. They were there last year when that McCain guy announced he was picking her for VP Candidate too.) At any rate, that was a Shocker indeed. Here was this "possible Presidential Candidate" with almost no Experience deciding to give herself even Less Experience by quitting the first Big Political Job she even had. Beats the heck out of Me why she did it. All kinds of Theories Abound. But Columnist Ellen Goodman has a theory of her own - Midlife Crisis anyone?

That was about It for the main News that I have missed talking to you about. If I think of anything Else, I'll be Back. In the meantime, have a great rest of the Weekend and enjoy some Catnip (responsibly, of Course). And with that, I'm outa here! 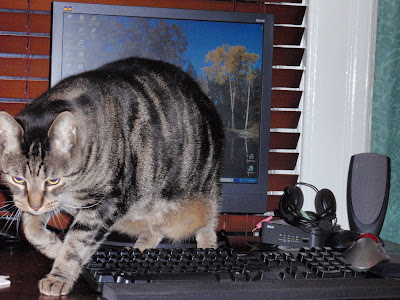 Who needs MSNBC when we have Baxter - his analysis is just as good, and even better than theirs. Well done, my astute cat-friend.

My goodness, Baxter, I agreed with you on every single point. (Don't tell my dog. LOL)

Baxter, even though your family up and disappears - I'm so happy you were able to keep apprised of current events. You did an excellent job with the update...and I agree completely.

Glad you are back with us Baxter... your insight as always is spot on.

Let's face it Baxter.... what you are saying is the world has gone mad, and maybe your pet humans escaping to the mountains is the only thing that makes sense?

Great blog! Baxter is obviously an erudite cat with wisdom oozing from every pore.

I count myself as a huge fan of Michael Jackson's music. Going back several decades. I think he was an extraordinary talent and I have chosen to remember him for his music and dance. It's so odd to think he's gone. 50 years of age is young by 2009 standards. I hope his kids are looked after and they are protected because the fights over money and custody may become very ugly.

OMG what a great pic at the end of the post! Baxter leaving the computer after posting his blog, over and out ... pissed off look intentional after having to analyze ANNOYING HUMANS.

I'm wondering if your Humans are behind this whole Palin thing as a way to keep amused. Hmm.

Thank you, baxter. I always enjoy your round-ups of American news written in a way I can understand!