It will be ironic if she fills the seat that her uncle, Robert F. Kennedy, once held.

According to the Times,

"The decision came after a series of deeply personal and political conversations, in which Ms. Kennedy, whom friends describe as unflashy but determined, wrestled with whether to give up what has been a lifetime of avoiding the spotlight.

Ms. Kennedy will ask Gov. David A. Paterson of New York to consider her for the appointment, according to the person told of her decision."

If she becomes a Senator, I wonder if it will be she, and not Hillary, who becomes the first woman president. It could happen.

What a long strange trip it's been. 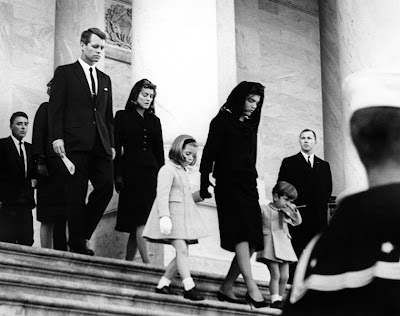 yeah, and I'm a little ticked at the Dimocrats in new York, the ones who supported Sen. Clinton and who now are attacking kennedy, saying she's not qualified.

With all respect to Clinton, what exactly were her qualifications for the job, other than being First Lady?

Caroline Kennedy is brilliant, and a Constitutional scholar to boot.

That makes her a better candidate than half the Senate from the get-go.

What Dave said. I think she'll make the Senate a more classy AND brilliant place.

As I said in my post, the only real reason people are opposing her is over the legacy issue. But I think she is plenty qualified and is the strongest candidate the Dems can put up.

I grew up in an Italian-American household of Catholics who worshiped the late President John F. Kennedy.

But Caroline Kennedy is more than qualified to fill Clinton's soon-to-be vacated Senate seat. She's a Constitutional lawyer, an author and a philanthropist who has raised millions of dollars for New York City public schools and unlike Hillary Clinton and her husband, Caroline Kennedy is a genuine New Yorker -- born and raised.

She will make a splendid partner for President-elect Barack Obama.

I agree with you all - I think she'd do a great job. And Christopher, as you said, at least she's an actual New Yorker!

I think she's definitely the best one to fill that Senate seat.

I really like her for the post, but I'd hate to be in Governor Patterson's shoes on this decision. He's got some heavy hitters in New York Democratic Party machine who feel deserving of a nod.

Andrew Cuomo is one. There's also the Nassau County Executive, Tom Suozzi who expressed an interest. He ran against Spitzer for the Dem Governor nomination a few years ago and has proven himself to be a competent leader in his current post.

My fear is that Republicans won't be the only ones decrying Caroline Kennedy having never held political office. I believe she has the political chops to do the job, but her appointment may ruffle quite a few political feathers.

I wonder what changed Caroline's mind? She's always said she's not political, not interested in public office, that in fact she's even very shy of public appearances.

Of course, a Kennedy can't really escape politics. I think it was Obama himself, the process of getting involved in his campaign & VP vetting process, and basically the inspiration he provides that inspired her. But whatever it was, I'm glad she's going for it.

Whether she ends up a senator by appointment, or whether she decides to run for office later, she's gotten the bug and I wish her great success. I like how soft-spoken she is, so opposite of the brassy Hillary. I hope the NY Gov is giving her serious consideration.

As far as her never having held public office before, oh pooh-pooh, part of the problem in Washington is the lifers who've become so entrenched in the system, they've forgotten (if they ever knew) that there is life outside politics. She would bring a refreshing outloook that is desperately needed.

I'll be the naysayer here. I'm leery of (and sick to death of) political dynasties, and I really don't care where they hail from.

Peerage is what guys like Jefferson and Franklin fought against their whole lives.

I do not profess to know whether Caroline would be a good or a bad Senator, but just the notion of her being an heir apparent bothers me greatly. Almost as much as hearing Jebbo might run for the Senate in Florida bugs me.

I hear you, Jolly.

But I don't think there's anything remotely similar between Caroline Kennedy and watermelon head Jebby.

Whereas watermelon head Jebby comes from a family of evil criminals and crooks who belong behind bars or even worse.

I've always kind of liked her, honestly. NY politicians recently haven't exactly been stellar or un-indicted, have they?

She has a good mind, good instincts and seems to be thoughtful and intelligent. Perhaps she felt a need to pick up the family political mantle. For whatever reason, she has made a change and jumped into the spotlight. This IS interesting.

Uncle Ted will likely have to step down in the near future, maybe he encouraged her.

I agree, "experienced " politicians can be a disaster. Bush & Cheney were considered to be the face of experience.

Your post caused me to look up more info about Caroline...

Kennedy is an attorney, writer, editor and serves on the boards of numerous non-profit organizations.
Law and politics.


Kennedy is a member of the New York and Washington, D.C. bar associations. She is also a member of the boards of directors of the Commission on Presidential Debates and the NAACP Legal Defense and Educational Fund.


She is also an adviser to the Harvard Institute of Politics, a living memorial to her father.

From 2002 through 2004 Kennedy worked as director of the Office of Strategic Partnerships for the the New York City Department of Education. The three-day-a week job paid her a salary of $1 and had the goal of raising private money for the New York City public schools.
In her capacity, she helped raise more than $65 million for the city’s public schools. She currently serves as one of two vice chairs of the board of directors of The Fund for Public Schools, a public-private partnership founded in 2002 to attract private funding for public schools in New York City.

How cool she worked for $1.

Maybe this is the first time in her life there was a president that actually inspired her to to participate?

I hope she becomes the new Senator.
I had not even thought ahead to her potentially being the first lady president. .....

Maybe I am still recovering from the last debacle-- I mean election!

Spartacus, you are probably right, which explains a lot of the criticism of the idea coming from other NY Democrats.

DK, I agree - even though she comes from a politically connected family, she herself is an outsider to Washington politics and therefore would have a fresh perspective.

Jolly, I have to agree with Christopher that comparing Jeb to Caroline isn't really fair. Although it was interesting last night on Rachel Maddow when she showed how many political dynasties there are on both sides of the aisle - amazing how many sons (or daughters) of politicians go into the politics business. But I think that goes right back to our founding fathers. After all, we had two presidents named Adams right off the bat!

Kevin, that is my thought exactly. Most NY politicians aren't exactly squeaky clean. I have no doubt Caroline is.

Maria, I'm wondering if it's because she turned 50 not that long ago...has a way of focusing your resources when you realize life won't go on forever. Perhaps after raising her kids and doing so much for her various foundations she felt she wanted a bigger way to make a difference in the world than even all she had already accomplished, which is a lot.

Fran, she is indeed very accomplished - it will be interesting to see how she interacts with people. She reminds me a lot of her mother, more than her father - kind of quiet and almost shy. But I'm sure she has the genes for the political fray! She did say in an op-ed piece in the Times that Obama is the first presidential candidate that made her feel the inspiration that others had told her that her own father made them feel. So this may have inspired her as well.

I think it's great that she wants to participate but I have to say I'm also a little scared too. Whoever shot the Kennedy's may still be out there willing to inflict more damage. Oops, that's telling on myself now isn't it?

And as for Clinton--we don't have to pit one female against the other. Whatever qualms Clinton has I am sure they are not petty. Not that I would agree with her assessment either, as I really do love the Kennedy's. I hate the way people want to have cat fights between women--as if only one woman at a time is allowed the spotlight, ever.

Hi Liberality -
I worry about that too. I'm hoping the fact that she's a woman might inspire a different reaction among the assorted psychopaths out there and perhaps they won't be as inclined to want to harm her. (I'm also worried about Obama in this regard).

I didn't mean we should pit Hillary vs. Caroline (unless other people are doing it?). I was thinking how ironic it would be if Caroline ended up in politics and later ran for President. I'd feel bad for Hillary in that case - she broke the ice and got people ready for the idea. And in truth, she could still be the first woman president. She's not that old. Caroline will still have to prove herself for awhile.

Yes, it has been a long strange trip.

Delightful at times, other times, cringe-worthy.

But long and strange, yes!

I really hope she gets her Uncles seat and I see it happening! I really can not see her as President but look how close Caribou Barbie got to it! That is scary!