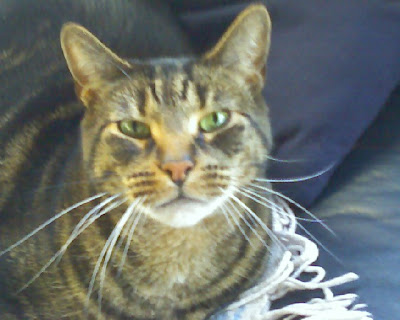 Baxter here. It's about time I got my Opportunity to Blog again. My Humans were Away last Week and I had no Access to the Internet. Then on Top of That, we had a Power Outage in our Neighborhood on Tuesday night because of Record-Breaking Heat followed by Severe Thunderstorms.

My Humans spent a Lot of Time at the Apartment Building where my Female Human's Mother and Aunt live. Everyone there is Very Old, and Heat is Bad for them. So having a Power Outage is a Very Bad Thing. Even the Elevators were not working, as the Emergency Generator kept shutting down. Luckily the Storm blew through before the Building had a chance to get too Hot, and they were able to open their Windows and let the cool Breeze - and the Very Wet Rain - come into their Apartments.

Then while my Humans were Upstairs at their Relatives' apartments, the Rain caused a sudden Flood on the First Floor. There is an underground Stream that runs under the Building and a Flash Flood just burst upward into the lobby. My Humans told Me that by the Time they came down the Staircase, there were several inches of Water all over the Floor. They said it was like a Scene from something called a Disaster Movie. My Female Human said it reminded her of "The Poseiden Adventure," whatever that was about. It was Before My Time.

It is Amazing how many things depend on this Power called Electricity. Even Blogging. My Female Human forgot that the Internet has to be run by Electricity and thought she could Access it on her Laptop since it runs on Batteries. But NO!

Our Town is still a Mess and some People still have no Power. Luckily, We are not Among Them so I can be here Today talking to You, for which I am Sure you are Grateful.

In other Weather-Related News, Des Moines, Iowa is being Evacuated due to Flooding. A Hospital in Cedar Rapids was also Evacuated. Seems as if the Weather is not being very Nice this Spring. My Female Human actually spent time in Cedar Rapids in the Distant Past on a couple of Business Trips. It is always Easier to Imagine a Disaster in a Place you have Been to than someplace you've Never Seen. (Similarly, since I never go Out, it is Hard for me to ever Visualize the Places my Humans go to, like this Place called the Adirondacks, or the other Place, Cape Cod. They tell me they are Nice but I am Skeptical. But I Digress.)

On the Political Front, it's going to be a Long Election Season. Instead of real Issues, the two Humans running for President, Obama and McCain, are Picking at each other's Advisers.

"McCain's campaign targeted Jim Johnson, a former CEO of Fannie Mae and a Washington insider whom Obama had tapped to help vet vice presidential nominees, for receiving a mortgage with favorable terms from Countrywide.

Obama has criticized the mortgage company for its lending practices.

Obama initially defended Johnson, but the advisor stepped down earlier this week, saying he did not want the controversy to distract from Obama's campaign."

Now, not Satisfied with Getting Rid of one of Obama's Advisers, McCain is going after Another One - Eric Holder - who is tied in with Bill Clinton's pardon of the Fugitive, Marc Rich (he was Deputy Attorney General at the time).

Both of these Advisers were supposed to be Helping find a Running Mate for the Obama Human.

"A spokesman for the Obama camp said Friday that the controversy over Obama's vetters has gotten "a little bit out of control."

'I think Eric Holder, obviously, is a very honorable man who worked the majority of his life in law enforcement. He has done nothing wrong, and I think this is sort of gone a little bit out of control,' Robert Gibbs, Obama's communication director."

Not to be Outdone, Gibbs then went on to criticize McCain's Choices in Advisers.

Culvahouse is a registered lobbyist who had represented Fannie Mae, Johnson's former firm, and is chairman of Omelveny & Myers, a lobbying firm that has represented Exxon-Mobile and Enron.

'Not to get into guilt by association or things like that, but let's look at who John McCain has vetting his vice presidential prospects,' he said. 'He's a former lobbyist and the head of the legal team in the Reagan White House during the Iran-Contra hearings.'

The attack on Culvahouse comes after the Obama camp has for months blasted McCain for having two lobbyists -- Rick Davis and Charlie Black -- head his campaign. Davis is McCain's campaign manager, while Black is as senior adviser to the Arizona Republican."

Ah, Politics! It's always Fun, Fun, Fun! I'm glad I'm only a Cat and don't really have to Think too hard about All This.

In Other News this Week, in a 5-4 ruling, the Supreme Court decided that Detainees in Guantanamo should have their Day in Court. It's about Time. Just because the United States Humans who are in Charge of the Government say that a Place is Outside the Rule of Law doesn't make it so.

"Justice Kennedy declared: 'The laws and Constitution are designed to survive, and remain in force, in extraordinary times.'"

It still leaves Unanswered Questions, but it's a Start.

Those voting in the Majority were: Justices Kennedy, Souter, Ginsberg, Stevens and Breyer.

It is Important to Note that these 5 Justices are a Fragile Majority; if any of them Retire in the next Four Years, the next President will be the One to Choose their Replacements.

Since, as a Cat, I can't Vote, I urge all of my Human Friends to think about this when they go into the Voting Booth in November. Think About what kind of Supreme Court Justices would be Chosen by the Obama Human compared to those who would be Chosen by the McCain Human. Just promise you'll Think About It before pulling the Lever (or whatever you do in your Voting Booths these days).

Baxter- please do not say a word to Mauigirl, because I do adore her... but I am secretly always happy to see your feline face greet me on the blog.

Wow- that is a lot of stuff to deal with, for the humans that is. What a mess with the weather, especially for the older people.

We had some bad storms too, but luckily not too much damage.

I'm glad you're back!

The politics are enough to make me chew on a catnip mouse.

Big hugs to your humans who've been dealing with a lot.

another Roberts
imagine wacky hijinks -
vote for the young dude

I have to admit, this holier-than-thou kind of vetter musical chairs is downright ridiculous.

Ah yes, these elderly fragile Supreme Court justices. As soon as McCain appoints a few rightwing judges, we'll have the Christian paradise that we've all been dreaming of. Roe vs. Wade will be overturned, and fetuses will once again become sacred. But once you're born, you can be locked away in an unknown prison for years without anyone knowing where you are, you can get waterboarded, or anything else Big Brother wants to do with you.

Good to see you survived all the storms, ole buddy!
"Power Outage in our Neighborhood on Tuesday night because of Record-Breaking Heat followed by Severe Thunderstorms."
You too, huh? Ma nature is going to have her say. Not even cats can stop that!!

Politics? Jump up on the bed and take a long nap. They're meaningless.

I love how this blog acknowledges that cats own humans, not the other way around.

FranIAm, it is only Natural that you should be Happy to see Me, glorious Me, on my Human's Blog. We Cats are, after all, Superior Beings. Glad that you did not have any Serious Damage from the storms.

DCup, my Human and I appreciate your Hugs.

Cosa, all is Well here now, Thanks.

Randal, an Excellent Haiku. I must Remind my Human to get back into writing some Haiku herself!

Comrade Kevin, that is what I thought. Even we Cats know what is Ridiculous when we see it.

Tom, that is a very real Fear that I have. As a Cat, I might not live long enough to see the complete Ruination of this Country but it would definitely affect the Next Generation. If the Country once again votes in another Right Winger, we are Doomed.

Future, Politics is much like Basketball. Not worth watching until the End. But somehow we can't help Ourselves.

Libhom, of course we Cats own our Humans; I'm so glad you understand that. It is a very different Relationship between Cats and Humans vs. Dogs and Humans.

Great post, Rush had some comments today about Countrywide. (very interesting)
We had severe storms and hail today..the good news sit only lasted for minutes. Hope all ends well for your homes.

Thanks for the updates....

once clarification baxter (whom i have grown to love)