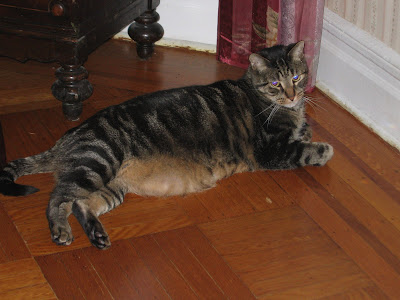 Baxter here. This is a new Picture of Me. I hope you don't think I look too Fat. I am a little self-conscious about my Belly. It really isn't that Large. It's the pressing on the Floor that makes it look that Way. I'm really just Big-Boned.

My Humans finally got around to downloading some Pictures from their Trip to the Cape. None of them are very Good in My Opinion, because they forgot to take any Pictures until after the three days of Sun that they had; so they only took a few Pictures, all on cloudy Days. So these Pictures are all rather Dreary in my Personal View.

As you will see in this Picture, the Lake was very Calm on this day. 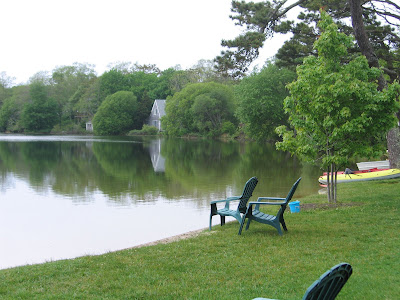 The Female Human's Mother stayed in this Cottage, which had a lovely Rhododendron in full Bloom. My Human told me there were many Rhododendrons blooming while they were there, even though most of them had stopped blooming here at Home by then. 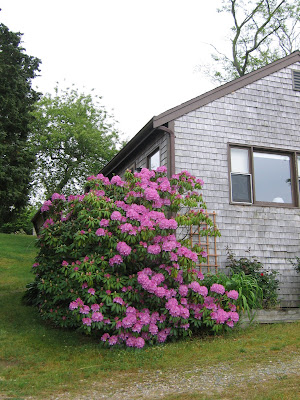 I understand since the Weather was not Very Good, the Humans and That Dog spent more time Indoors than usual. Here is a picture of my Male Human and That Dog on a Rainy Afternoon. It certainly doesn't look Too Exciting at this Cape Cod place. 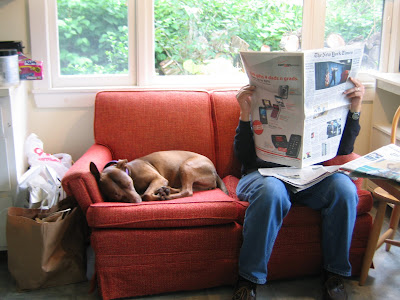 That Dog did a lot of Sleeping. Here is another picture of her. She is not Very Modest. 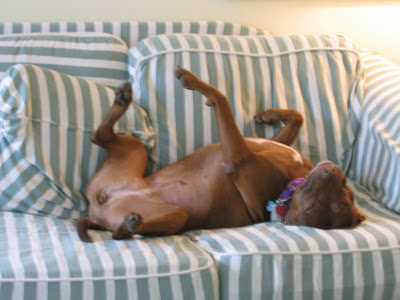 So those were the Highlights of the big Vacation. They tell Me that they also walked a lot on the Beach and went for long Walks in the Woods but apparently have no Record of this Activity.

Personally, it looks like a Place I could do without. As an Indoor Cat, I'd just as soon hang out in my Own Home as go to some other Place that is Smaller and not as Well-Appointed, and hang out there.

I will be back again soon with my incisive Commentary on Current Events and perhaps even some Pictures of the Wrens that are living in our Back Yard. They sure look Tasty. I see them flitting about in the Yard when I look out my Window. I hear from my Humans that the parent Wrens have Baby Wrens now. Mmmmm. Baby Wrens....so Tender and Succulent. Oh well, I will have to Make Do with Cat Food - and of course, some Catnip. Until next time, I will say So Long For Now.
Posted by Mauigirl at 6/22/2008 04:41:00 PM

Hello again Baxter:
I look forward to my chats with you and a few other people owners a lot. In fact, that helped me make a important decision. It seemed that while you people owners kept your cool fairly well, a lot of the people themselves seem to have lost theirs, your owners not included.

We all go ballistic occasionally, even you felines. I now have 4 of the trouble making monsters, so go fluff up for somebody that might believe you!:)

But this seems different than just a fluff up and a few hisses and a lot of glares for a while. I don't really know what is happening to be honest with you: I just know it's not a world I wish to live in, so I dropped by to say goodbye for a spell. I can't promise I"ll stay gone, nor can I promise I'll be back. I just need to sit down with my owners, maybe share a couple tuna sandwiches, then take one of those naps you guys made so famous, and talk things over with my handlers.

How serene that lake appears. There's your island in a sea of lunacy.

I hate to break to you, Baxter, but there are no bones (big or small) in the belly. But you know that in the cat world, a large belly is simply a sign of success, so you shouldn't be self-conscious. To me, displaying your belly is an invitation to get a tummy rub.

We also have one of those Hustler-posing female dogs in our home. All of our male dogs sleep tightly curled up, nose to tail, but the female spreads it all out. I wonder why that is.

I like how you nicely admonish the dog for lack of modesty.

I think it looks like a lovely, calm place, but I can understand how you feel about leaving your domain.

Baxter- I am just always glad to see you on the blog.

Beautiful scenery! I am very impressed that your cat could correctly spell the word "Rhododendron". So many cats today stoop to this terrible "i can has" cat slang.

My Mom's cat looks just like Baxter! (He even has 'big bones'.)

wonderful photos..and Baxter looks so wonderful...( it is all about that angle- he is not fat at all ....nope)....and the cape photos are amazing...( I love the cape- it is so timeless...)

What a perfectly splendid setting!

I could live there. So leafy green and serene. No wonder you go each year.

I attempted to take pictures of the company I entertained for most of last week, but she was opposed to it, so I a photographic opportunity was lost for posterity.

Baxter--you strongly resemble my lovely cat Cassidy. He too is a bit portly. But very lovable.

Hello all-
Sorry for my absence, it is a hectic week here at the Big Corporation and I've been working long hours. Baxter isn't available at the moment to respond but I will do my best to speak for him.

Future, I am sorry to hear you are taking a vacation from our little world and hope it will not be long. Take your nap and eat your tuna and come on back and join the fray!

Randal, it's so true - I need that serenity on a regular basis.

D.K., funny how different dogs have different personalities and ways of doing things, isn't it? Our last dog would no sooner have rolled over on her back for any reason whatsoever than stand on her head, but this one loves to just let it all hang out! And yes, the Cape in general has a lot of great places for long walks, and also a wonderful bike trail that goes through fields and over ponds and through woods - it's great.

DCup, one of these days we may bring Baxter up to the Cape if we stay for a longer time. He might adjust!

Fran, I know cats think vacations are overrated...not me though! ;-) I think Diva enjoys them too although I think she likes coming home as well. She is always glad to see her territory again!

Dr. Z, maybe this type of cat tends to have "big bones..." Yes, Baxter is an excellent speller. He understands that bad spelling is a pet peeve of mine so he makes a real effort.

Enigma, Baxter will be gratified that you feel it's just the camera angle...

Christopher, if you haven't been to the Cape I highly recommend it!

Comrade K, so sorry you lost the opportunity of a photo shoot.

KGMom, it seems there are a lot of Baxter lookalikes around. In fact, my neighbor has one who looks just like him but since he's an outdoor cat he must get more exercise as he is a bit leaner!

Baxter, I'm sure your humans missed your desperately while they were away, and they are just trying to keep a stiff upper lip. I enjoyed your photo. YOu are a very handsome cat.

You may tell your humans I liked the vacation photos too. It will please them.

Ruth, I appreciate your Compliments to Me and my Humans are glad you liked their Pictures.

Femaildoc, I will try to Forgive your Comment about my Size. While it is true I do weigh 21 pounds, I am Very Big Boned and have a Large Frame. My Humans are trying to cut back on my Food but I really think it's Lack of Exercise that is the Culprint here. Perhaps That Dog should chase me around the House a little more...