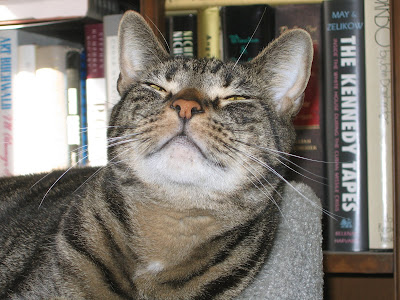 Baxter here. As you can see from this picture, I've been entertaining myself tonight by getting into the Catnip. There was another one of those Debates that my Female Human likes to watch, but I've had enough of them for awhile so I didn't watch it myself. So I thought I'd have a little Diversion from Politics for a change and do a little 'Nip to relax.

Yes, I know I'm a day late. My Humans have been very busy with my Male Human's parents so they haven't been giving me the Opportunity I need to get on the Computer to Blog.

However, That Dog I am forced to live with has also been Inconvenienced, so it's not all bad. The Male Human has been away on a Business Trip and the Female Human has been visiting his Parents in the evening. This means That Dog hasn't gotten as much Attention as she generally demands. So she wants to play when the Female Human gets home and does lots of barking. I keep a low profile when this happens; I hate Noise. Another reason to delve into the Catnip.

Well, as you know, it's been another busy Week. Besides the Political news, there have been other Events of Note. For instance, Fidel Castro resigned as President of Cuba. He'd been Dictator for Life practically ever since my Humans can remember, starting in 1959. In fact, my Humans remember very distinctly when in 1962 he allowed Russia to put nuclear missiles on his Island only 90 miles from the shores of Florida. This was called the Cuban Missile Crisis and eventually - after the Humans truly feared a Nuclear War was going to happen - the Russians agreed to remove the Missiles and things calmed down again. The stupid thing is ever since then, no one who is a U.S. Citizen is allowed to go to Cuba. Not even now that Mr. Castro has Resigned. It seems kind of Silly to me.

However, I digress. It must be the Catnip. Of course, this was all Before My Time. I was only born in 2001, myself. I don't even remember the 9/11 Attack the Humans talk about that apparently started this War on Terror business.

Let's see, what else happened this week? Oh yes. There was a lunar eclipse last night! It was pretty Spectacular, I am told, although I didn't bother to try to look out the Window; I was busy Washing. My Female Human happened to come home just as it was at its Peak and saw it as she was getting out of her Car. She reported it made the Full Moon look like a tiny little sliver of a New Moon.

The Pentagon shot down that satellite I told you about a couple of weeks ago, with a Navy missile. Supposedly they got it right where they hoped to, and the Dangerous Fuel on board will burn up in the Atmosphere. There is Much Suspicion among the Humans that this wasn't really Necessary and that this was Only a Test to see if their anti-missile missiles actually Work. Star Wars Lives!

That's it for my News Roundup. I'll end with a LOL Cats that I can truly identify with. If I could lure That Dog down into the Basement, this could be ME!

No, I haven't been taking any catnip.

If the satellite shootdown was meant to prove that US anti-missile missiles (let's just say anti-missile, it's shorter) can actually shoot down missiles, it is not very convincing. It's much, much easier to successfully destroy a satellite than a hostile missile. The satellite's trajectory is known quite well, so the anti-missile knows exactly where to go. That's not the case for a hostile missile - the system has to detect the missile and determine the trajectory from tracking informaton, with typically less than a minute of tracking information to use. The result is there's a lot of uncertainty in exactly where the missile is, and a lot of real-time adjustments to the trajectory of the anti-missile as it flies. This is exactly the reason the Patriot (anti-)missiles, designed to shoot down airplanes, were not actually effective against the SCUD missiles back in the first Gulf war. (Many hit SCUDs, but not in the right place, the warhead in front, to actually be effective.) Even though the anti-missile hit the right part of the satellite, this shootdown didn't test the hard part at all, hitting the right part with limited and constantly-revised tracking information.

On another note, I wish the reasonable assessment of risk in that NYT op-ed pieve could also be applied to launches of science satellites, which are no longer allowed to have effective long-term batteries, like those that powered the very successful exploratory satellite missions in the '70s - such as the Voyagers (Jupiter, Saturn, outer planets) and Vikings (Mars landings). These days, those batteries can't be used because they contain dangerous chemicals, and if something went wrong they might end up landing in someone's back yard and hurting them, just like the fuel tank. In both cases the risk is extremely low, so it's clear that the decision has nothing to do with risk assessment.

I will add you to my blog roll this weekend...

Have a great day!

Randal, LOL, I remember when Ronnie was all gung ho about it. In fact, I also recall a memorable evening at our abode when my Democratic parents almost came to blows with my Republican aunt over Star Wars after a stiff cocktail before dinner! ;-)

Satan,
I agree - it proves nothing, as I remember when those patriot missiles didn't work all that well too. One thing I'm hoping is that they might be working on a way to shoot down that meteor that's supposed to nearly hit us in 2029! That's probably a bigger threat to us than anything else!

The biggest problem with the Patriot/SCUD thing wasn't that they didn't work, it was all the lying about it. It took a lot of effort by Ted Postol (MIT professor) to get the point that they hadn't worked across.

Meteor: 99942 Apophis will pass near the earth in 2029, but based on increased observational data it's now known that it's extremely unlikely to hit the earth. Previously, with less data, the estimate was a 3% chance of hitting earth.

Since it weighs over 10 billion pounds it could not easily be shot down. A better strategy is to deflect it, either with nuclear explosions nearby or just a kinetic impact - hitting it with something in exactly the right way. Either approach would be very, very expensive, though - likely not worth the investment since the actual risk from 99942 Apophis is extremely low.

Hey Baxter. Humans can be strange animules. Almost as stubborn as dawgs. Nonetheless, human idiosyncrasies must be tolerated to some extent, because they provide food and nip. Speaking of nip, are you going to offer me some? ;-)

Satan, thank you for the reassurance about the 2029 meteor. You're right, if it's that small a chance, not worth the effort. But I understand they keep recalculating the distances so we'll see if it stays that way. Reminds me of an old Star Trek episode (as most things do!) where they had to activate some beam to push the asteroid away from the planet. Too bad we don't have a beam already set up as they did!

Tomcat, Baxter says you are welcome to share his catnip. He says to let me know where he should leave it for you? ;-)

Baxter- can you get your own cable news show? Besides Keith Olberman, you would be the only one I would watch.

In fact I think I like you much better.

Tell those two that take care of you that humans are sending good thoughts, wishes and so forth.

Asteriod: There's a somewhat paradoxical effect with these asteriod trajectory calculations: They often tend to start with a low probability to hit the earth, then, with more data, the estimate goes up, then, with even more data, the estimate goes back down, and continues to go down. All the calculations are correct, and consistent with each other, it's just a feature of the probability distributions. They do keep recalculating the possible trajectories, but at this point, the probability will only go up if something actually changes the trajectory, e.g. if the asteroid hits something we don't know about.

Good morning, I'm back and finally on my computer. It feels wonderful. This was a great update. Been coming out of the chemo cave since Thursday night. Had to stop all and won't start until March 10th if all goes well....

Thanks for the updates.

Hi Dorothy, I just visited your blog and caught up - been having my own issues that have been keeping me from blog visiting as much as I'd like.

I'm sorry you can't do the chemo till mid-March but hope you are feeling better in the meantime. Sending you lots of positive thoughts!

That picture of the cat on the washer and the caption is laugh out loud funny.