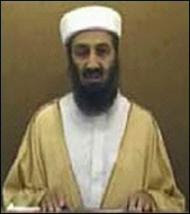 Just in time for the sixth anniversary of the 9/11 attacks on the United States, Osama bin Laden has released another of his videotaped diatribes. There he is, big as life, rested and ready, none the worse for wear, despite all of Bush's original rhetoric of getting him "dead or alive."

Experts believe bin Laden's video may be a harbinger of more attacks on the U.S.

'Our analysts assess with high confidence that Al-Qaeda's central leadership is planning high impact plots against the American homeland,'Hayden said."

According to the article linked above, Osama made some points that, unfortunately, I have to agree with:

"He says the Democrats who now control the US Congress have failed to stop the war, and even 'continue to agree to the spending of tens of billions to continue the killing and war there.'"

The video was his first in three years, and in it he appears to have dyed his beard black, which may be a symbol of impending war.

Of course, the White House is downplaying the importance of the video. Homeland Security adviser Frances Townsend said on Fox News Sunday that Osama is "virtually impotent," and that the video was just "propaganda."

This stance is refuted by the information in this article from the Seattle Times:

"Dodging the U.S. military in Afghanistan after the Sept. 11, 2001, attacks, al-Qaida Central reconstituted itself across the Pakistani border, returning to the rugged tribal areas surrounding the organization's birthplace, the dusty frontier city of Peshawar. In the first few years, Pakistani and U.S. authorities captured many senior leaders; in the past 18 months, no major figure has been killed or caught in Pakistan.

Al-Qaida Central moved quickly to overcome extensive leadership losses by promoting loyalists who had served alongside bin Laden for years. It restarted fund-raising, recruiting and training. And it expanded its media arm."

If the purpose of invading Iraq was to destroy al-Qaeda, all I can say is it's doing a "heckuva job."

In the meantime, Down Under, our revered President is playing his usual part when he attempts diplomacy: acting like an idiot. 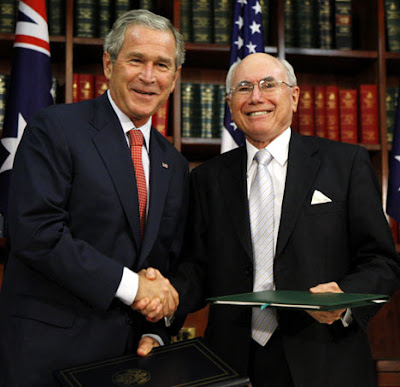 Between mixing up Australia with Austria, OPEC and APEC, and trying to exit in the wrong direction, all while pranksters dressed as terrorists plagued the conference he was attending, W's performance in Australia could be a scene out of Saturday Night Live. Truth is truly stranger than fiction.

Sometimes, I wonder if the two of them aren't planning together. What would this administration cling to if it weren't for terror? Their domestic record?


The most impotent of all, calls him impotent. That even makes me smile.

I know, it sure does seem "coincidental" that OBL turns up whenever W needs us to support his war in Iraq.

I know some are suspicious that this is fabricated. If so, I don't know what is worse.

After reaing Pygalgia's post about OBL, I do feel some concern.

Yet I also know that this admin of doom will trot out what they need to support their ill-gotten goals.

Yes, Fran, I was also very concerned about what I read on Pygalgia's post.

It could be OBL wants us to keep on in Iraq so that he continues to recruit new followers of his cause, and the best way to do it is keep shoring up Bush's regime.

Ah yes, another 9/11 anniversary. Time to get the big bad bogeyman off the shelf, dust him off and scare the American people. It'll be a perfect prelude to invading Iran.

Yes, I'm sure they'll now use this to hype up the Iran threat. Good point.

Bush and Osama are the best of enemies. Bush's policies are the best recruiting tool Osama ever had. Osama gives Bush his fear card.

Isn't it always so convenient for a Bin Laden message to pop up just when Bush needs something to try and scare people.

Wonder if that was dubbed from years ago ( Bin Laden sure looks younger, in spite of the black hair) and how many can interpret what is supposedly being said.

The Booman Tribune has a pretty convincing post out about why this "latest" video is a crock.

Follow along with them, and you'll have no doubt at all.

Wow, very interesting, Jollyroger, I hadn't heard about the way the video froze midway through. It does indeed seem suspicious.

As I said, if it is actually a forgery, it means this administration is even scarier than I thought.

But isn't bin on the run in a cave somewhere? He must be running all over that cave. I bet he's tired, don't you?

Bush is the gift that just keeps on giving if you like assholes.

I think bin is on speed dial just in case the repubs need a little help keeping the country frightened.

Funny how Bush is telling everyone that we're kicking ass and that Osama is impotent...this coming from a guy who can't eat a pretzel until his mommy chews it for him first, hid in his plane while the US was being attacked-and didn't even show up until three days after 9/11, and has a VP who spends most of his time in an "undisclosed location". Ugh...how did we ever get here???

Mary Ellen and PoP, SO TRUE.

I'm with POP...and actually all of your. It's too convenient for me...they could easily play with the videos. The thing is...OBL needs to stop running in that cave and let us know that he isn't doing those videos!

I'm assuming that nobody likes Bush anymore. Well there wouldn't be so much intolerance for Americans in general around the world if he hadn't been elected...oh, huhum or did he steal the elections too?
Mauigirl I couldn't help but laugh out loud when I saw you called him an idiot. Oooh what if the CIA sees your blog and puts you on a black list?!
I actually think that Bush is equivalent to Hitler, to Mao and Stalin. Hitler killed 11mill ppl Mao 80mill ppl and Stalin about 20 million people. Bush is close to his one million Iraqi's. Not to mention 5-6.000 Americans!
Not bad for a total nutcase.

It is indeed fascinating that when ever Bush needs support, a video with Laden will pop up.
Any stupified idiot can see through that!

Mary Ellen cracks me up!!!

Welcome, Visionary! Thanks for your comments!

I agree, Bush's methods are very fascist. I'm not convinced he is smart enough to be a true Hitler or Stalin, but certainly his handlers are.