Off to the Cape! 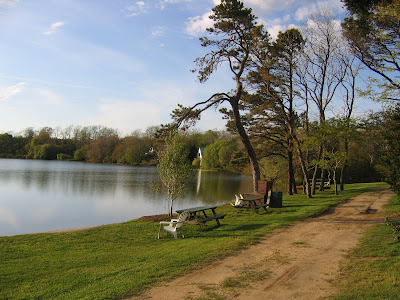 The work week is over for me - tomorrow we're leaving for our annual spring trip to Cape Cod, with my mom and Diva. We have been going twice a year, in the spring and fall, for the past several years. We used to only go once a year but it never felt like enough! We stay at Gibson Cottages in Eastham, which are on a lake right off the main road but feel so secluded that you would never know that you were so close to civilization. Diva loves to go swimming in the lake (see picture above).

I've been going to the Cape with my family since I was about two years old. My mother and her family used to go to the Cape ever since she was little too, so it is truly a family tradition. DH and I went to the Cape for the first time right after we got engaged, and I was so glad that he loved it as much as I do.

The Cape isn't like a lot of other seaside vacations; it's nothing like the Jersey shore with its boardwalks and carnival rides and games of chance. Because President Kennedy established the Cape Cod National Seashore back in the '60's, the ocean side of the Cape up past Orleans is preserved forever. Homes that existed in the preserved area of dunes and beach before the law was passed were grandfathered in, but there has been almost no development of the land since then. So that part of the Cape is still largely unspoiled and hasn't changed since I was a child. When we arrive on the Cape I'm like a dog returning home, sniffing the air, trying to make sure that everything is still as I remember.

Along Route 6, also known as the Mid-Cape Highway, there are quite a few restaurants and stores, but even the newer ones are still in the same style as the old ones so nothing sticks out. Many of the restaurants have been there since my childhood. One of the restaurants we traditionally go to is the Eastham Lobster Pool, which I've been going to since I was a little kid. One of the attractions back then was that you could pick your own lobster ("See 'Em Swim"). Of course now I try to avoid knowing which lobster is the one that will end up on my plate.

The Lobster Pool was only a screened-in place with picnic tables inside back when I used to go there with my parents. Now it is enclosed and has a bar, but is still very casual. Although we still enjoy going there, we actually prefer Moby Dick's, farther up Route 6 in Wellfleet, for the food and ambience (very nautical, equally casual).

Wellfleet is a great town full of quaint buildings, art galleries and craft shops. We go there often to walk around, shop, and occasionally buy groceries at the Wellfleet Market or Hatch's Fish Market. Wellfleet also has one of the last Drive-In Movie Theaters around. During the day on weekends there's a great flea/antique market there as well.

We love going up to Provincetown too. Sometimes we just go for the day and walk around and have pizza at our favorite pizza place, Spiritus Pizza. Other times we'll stop at the Portuguese Bakery for pasteis (codfish cakes, also called bolos de bacalhau) and espresso.

On the way up to the Cape we stop in Fall River, Massachusetts and stay overnight so we can go to our favorite restaurant there, Sagres Restaurant. On Friday nights they have fado music and that is always a treat for us, so we make sure to go up on Friday in order to be there to enjoy it.

I'm bringing my computer and hope to find some Wi Fi hot spots so I can get on line without having to go to the library. But in case that doesn't work out right away, have a great weekend!
Posted by Mauigirl at 6/01/2007 01:04:00 AM

Email ThisBlogThis!Share to TwitterShare to FacebookShare to Pinterest
Labels: vacation

Have fun! When you have a lobster roll, think of your old pal Evil Spock!

Thanks! They have some great lobster rolls at a place called The Friendly Fisherman on Rt. 6 in Eastham!

The Sparrow has Wifi, enjoy your time here. (It was kinda shocking to see this post, this is my turf)

Thanks, Angry Ballerina! We discovered the Sparrow had it today as we sat in the rain in our car in the parking lot next to CVS! Am now sitting in the Lighthouse in Wellfleet, also a hot spot.

Will check out PJs! Somehow I've managed to come up here every year and not eaten there!

Amazing! I stayed with my French girl-friend at the Provincetown Inn many years ago. We loved it, the food was fantastic, but too much food by our standards (Nelly is still a brilliant cook). But in those days, before the April 25th 74 Revolution, i had not the slightest connection with Portugal. If I went to the Cape now - or NJ for that matter -I would insist on checking out places like the Sagres (do they have Sagres beer too?) etc. When I go to London, I miss Portugal, hearing/speaking the language, cafés & grocery shops so much right away that I always go to the nearest to my sister's house. So I'm delighted to know you have such a fondness too.
PS, what a great place the Cape is! Hope it's a brilliant week's holiday.

Thanks Icarus! I love Provincetown, it's a great town. We spent most of Sunday afternoon there since the weather wasn't good for the beach. There is a lot of Portuguese influence in P-town, and one truly authentic Portuguese restaurant there - "Tips for Tops'n." (It also serves breakfasts and non-Portuguese fare but has the "real thing" as well - including our favorite pork & clams). You'll enjoy my latest post as I am talking about the fado! And by the way, go to Beauchamp Place in London next time you're there if you want to enjoy some Portuguese food away from Lisbon...last time we were there, there were at least 2 Portuguese restaurants on that street (one being O Fado, which I mention in my post).