Here we are on the 11th of January and it's still hard to believe it's winter. The weather has been so unseasonably mild that even the hardest-core global warming deniers are starting to come around. Of course, don't tell that to some poor schmo in Denver, where they've been getting yards of snow. 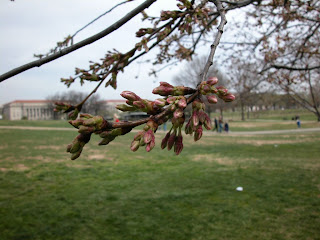 When we visited Newfoundland last year, we heard everywhere we went that they have seen the effects of global warming much more obviously than we do in the more temperate New Jersey area. Places that were used to having scads of icebergs floating by, which were used as a very effective tourist attraction, hadn't seen a one in several years. And I have to admit seeing buds on cherry blossoms in the park in January is a bit of a shock.

Yesterday we actually had a tiny snow flurry that left a scattering of white flakes on the ground. It made it look cold. I have to admit that I am just as happy that New Jersey seems to have decided to skip winter this year. I also admit to having a recurrent and growing case of Seasonal Affective Disorder and that when fall starts to creep up on the late August days I start getting depressed even THINKING about winter. So for me, global warming has a lot of benefits, since part of my depression is caused by the thoughts of:

It's not just the lack of light, people. It's the hopelessness of knowing that green leaves, bright flowers, light and airy clothes and bare toes are so many months away. In fact, the height of my SAD symptoms usually surface in late January/early February when the glow of Christmas (and Robbie Burns' birthday, another favorite holiday celebration) have worn off, and the joy of St. Patrick's Day is still too far away.

However, this winter has been almost a pleasure. Last Saturday was 73 degrees and we took our dog for a walk in the park wearing short-sleeved t-shirts! (Us, not the dog). It was amazing. And if the weather can just hold off another month I'll be on my way to Australia, where it will still be the end of summer, for two whole weeks. Then when I get back, March will have arrived and St. Patrick's Day is around the corner and then - spring.

Yes, I am going to Australia. DH has his next business trip scheduled, and will be renting an apartment for the three weeks he'll be there. We tried to get me some free business class tickets but nothing was available, so looks like I'll be paying $2 grand to fly down there on Qantas, but once I'm there the digs are free, so that's not so bad. Sadly I'll be in Coach, but hey, you can't have everything.

Next week is supposed to be colder here but no snow so far. I actually credit my husband for this whole phenomenon. At the beginning of the winter he got out the old but powerful snow blower our good friends had so kindly given us last winter, and he got it all ready for the upcoming winter. Changed the spark plugs, put in all new oil and gas, including a dry gas additive, and did various other repairs and tuneups to it so that it was running like a top. All ready for the snow! Naturally we haven't had any all winter. I told him either way, the snow blower is working for us!

I know not everyone likes having no snow in the winter, and to tell the truth, I always enjoy that first big snowstorm, when it's all exciting to get up in the morning and see how much is out there and marvel at the change that it has wrought on the world around me. But that wears off really quickly for me, and days and days of snow and ice just wear me down. But some people do get depressed without the change in the seasons, and for them, I'm very sorry. Maybe next year will be your year!
Posted by Mauigirl at 1/11/2007 12:42:00 PM

Email ThisBlogThis!Share to TwitterShare to FacebookShare to Pinterest
Labels: winter

Same here...much milder than usual though we've had gales today which have caused a lot of damage for some people. The threat is on the horizon of cold weather on the way..I too get a bout of SAD...the days are too short for my liking. Bet you'll have a great time in Aussie; blow the expense....too good a chance to miss!
Rx

Thanks, Ruth! Wouldn't give up a chance to go to Adelaide for two weeks. Especially since the apartment is paid for by hubby's company. The meals too - he gets a per diem amount which is above what is needed for one person since the places we like to go to aren't that expensive. So it won't be all that pricey!

Hi I've seen your comments on my friend Ruth's quite a lot.
Sounds like you live somewhere pretty similar to where I grew up. I'm from a "dormitory town" about 20 miles north of London. Surely it must be similar in NJ? "All roads lead to New York?" That's what it was like for us... all roads and railways v much went in and out of London... it was difficult to get anywhere else. That's maybe why I'm in London now...
Okay take care of yourself I'm going to read some more...

Hi Gledwood!
Thanks for visiting my blog! Yes, I live about 10 miles west of New York City and of course many of the residents of my town commute into the city. We are on the "Midtown Direct" train line and it's only 25 minutes to Penn Station, NYC, from where I live. I don't work in the city, though - I commute about 20 minutes to my company which is west of here.