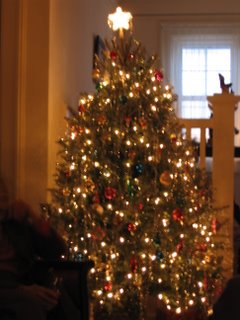 Of course when we got home it was too late to put up our own tree so it's still sitting in a bucket of water on the back porch. But at least we HAVE it. And it's only December 10th! Maybe this will be the first non-stressful Christmas ever! (I shouldn't say things like that, it will only jinx me...)
Posted by Mauigirl at 12/10/2006 11:45:00 PM

Tree looks great; sure yours will too once you get a chance to get it out of the bucket. Must admit a lot of my Christmas stuff is being done on the computer. Shopping, making personalised cards, gift tags etc.
Have a great Christmas.

I totally do all of my shopping on the internet. I haven't gone to a store once this season. I have a big pile of packages sitting in the spare room which I need to open and remind myself what I bought for everybody.

You and Mick have a wonderful Christmas too.

Well, as I always do, everyday I visit a friend of my friends, today I came to your blog and I'm glad I did. I wish you the best....I'll come back :)