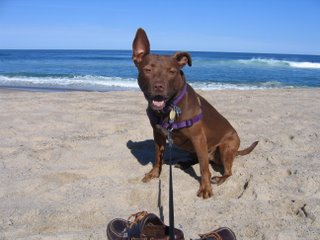 Got back last week from vacation - we went to Cape Cod for a week with our dog, Diva. Diva had a great time chasing her ball into the lake and swimming back with it, running on the beach and digging up rocks and barking at the waves that hit her while she wasn't looking. We took lots of walks, ate lots of lobster and oysters and french fries and generally had a relaxing time.

Diva is an American Pitbull Terrier that we got from a rescue group that specializes only in APBTs. She is the sweetest dog - loves everyone. As her description on Petfinder.org said, she even wags at passing cars, thinking they're coming to see her. Pitbull Terriers are wrongly maligned by many people and often, the media, when in reality they are excellent with children and people in general. There is debate about whether or not they have a genetic tendency to be aggressive to other dogs or whether it's all about how they are raised and socialized. I think there may be that tendency in some, but not all, of the pitbull breed. Our girl is good with other dogs if they're nice to her. But I have seen her get very nasty if they start something with her first. So we are very careful and do not take her to dog parks where she would be off leash, and we make sure she is always under our control.

We've had her about a year and she is a true joy. Our previous dog, Alice, was a wonderful dog too - part pitbull and part Lab (we think). But she was a little pickier about who she liked, so we had to be a little more careful with her. She was great with our families and our closest friends, including all their kids. But strangers, as she got older, were another story, and she was wary of some of them. We were heartbroken last summer when she died of a sudden, aggressive form of cancer. But after two months of grieving, we had to get another dog. Our cat, Baxter, did his best to make it up to us, but a cat is not a dog and a dog can't be replaced by a cat, and vice versa. Baxter is the epitome of a cat, he is very good at what he does, and he is affectionate. But he is not a dog.

I've been really busy at my job at the Big Corporation so haven't had much time to write lately. This was a busy weekend too. We had our annual block party yesterday, a good time was had by all. We also went to a football game. And the good thing is, neither were rained out as I'd feared.