A Cat's Eye View: Looking Back and Looking Forward 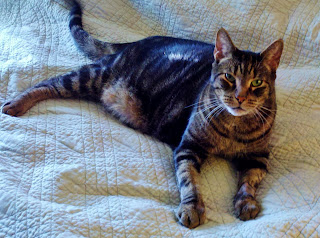 Baxter here. A Belated Happy New Year to all my Fans.

Some of you may know that I had a Scary Health Problem a week or two ago. All of a Sudden I couldn't eat my Food properly! My Tongue hurt. It stuck out the Side of my Mouth and that made me Drool. It was Disgusting.

Luckily, as soon as my Humans noticed the Problem, they rushed me to the Animal Emergency and Referral Associates over in Fairfield, NJ; because of course this first popped up on a Friday night after the Regular Vet closed.

They are Wonderful People there, although I did not Appreciate being held and having them look at my Tongue. It turned out there was a Big Lump down there under my Tongue with a sore on it. The vet thought it was Cancer, but they couldn't tell until they did a Biopsy. So I spent the Whole Weekend at the AERA with an IV to keep me hydrated until they could Put Me Under on Monday morning and do the Biopsy. In the Meantime they gave me Steroids for inflammation.

By the time my Female Human picked me up on Tuesday morning I felt Great! I came Home and happily scarfed down a Whole Bowl of wet food. I purred. I rolled on the Bed. I was a New Cat.

Amazingly, the Biopsy turned out to be Normal - no Cancer! I am still taking Steroids, but am feeling Fine. I go back for a Checkup next Tuesday to see if the Problem is gone.

So that's the News from My perspective.

Now, for the Rest of the News. As Everyone knows by Now, the Fiscal Cliff Disaster didn't quite Happen. At the Last Minute the President and the Republicans were able to come to an Agreement to raise taxes on the Richer-than-Most-People, those making $400,000 or above as a Single Person, or on couples making $450,000 and higher, among Other Things. Plus, Federal Unemployment Benefits were Extended for a year. But none of the Budget Cuts that were originally part of the So-Called Cliff were enacted - that Fight is Yet to Come.

Now, I know Some of You feel that the President gave in to the GOP by allowing the Cutoff for being "Rich" to rise from $250,000 in income, which was the Original Idea, to $400-$450,000. But as a Cat, I look at it This Way. If there were a Big Tomcat over on one side of the Yard that had a big HUGE Two-Gallon Bucket full of Catnip, the difference between those two amounts would probably be the Difference between a Quarter Cup of Catnip vs. a Half Cup of Catnip out of that whole Two Gallon Bucket. So the Tax is going to be on the Rest of the Bucket, which is still a Lot. Right? Please do Correct Me if I am wrong in this Analogy. I am Only a Cat and we don't really Understand Taxes too well.

Looking Ahead, it seems the GOP still doesn't Admit that they Lost the Election in November. They vow to have a Big Fight over Raising the Debt Ceiling next month even though President Obama says he won't Fight about that subject. It Remains to be Seen whether he can avoid that Fight.

My Female Human will be back shortly to discuss Gun Control issues. In the Meantime, hang in there, the Days are already getting Longer and Winter cannot last Forever! Have some Catnip and Relax. I know I will!

P.S. My Female Human has added a Word Verification thingie to the Comments. There were Too Many spammy comments being Posted on the Blog. Apologies to Our Loyal Readers for having to Put you through that Annoyance.
Posted by Mauigirl at 1/08/2013 03:47:00 PM

Well Baxter, I'm glad you are okay. We were worried about ya. Diego the dog says hi. And you are a good reporter on human stuff. We humans are making a mess of things and hope maybe you dogs and cats might have some suggestions?

Baxter--you are looking absolutely MAH-velous.
Glad your health scare was not too scary.
I agree with you on the fiscal cliff stuff.
OK--back to the catnip.

I'm glad you're feeling well, Baxter! Emily (one of the felines who owns my home) is not feeling well herself and is going in to visit the doctor on Saturday. I'm hoping the solution to her ailment will be fairly straightforward. She's only 6 1/2 years old, which I believe is young for a cat to be ill.

And hooray for President Obama!

LOL! I think I'll get me a cat to take over some of my blogging duties. :)

Hey Baxter! imagine the nerve of those vets sticking their fingers in your mouth ... they probably thought about shaving you, too, but couldn't justify it in this particular case. surely you let them all know that when your human sprung you, they would have to pay for those indignities. what, they made your human pay? well, that's ok ... you are still the cat's pj's! taxes schmaxes ... the fact you resumed eating normally, no slobbering, is more IMPORTANT than those illustrative gallon buckets of catnip! afterall, you only really need a little taste once in awhile.

Happy New Year to you!

Catnip & Guns & budget battles Oh my!
Could be a strange year for sure.

I can't believe the humans are thinking of having armed guards in schools. Are they nuts?

Well-- a good quote/analogy is
when they looked to put a stop to drunk driving, no one thought the solution was more alcohol.

Glad to hear you are well Baxter.....

Thanks for all your Comments. My Human and I are looking Forward to another Year of Political wrangling. But maybe Finally it May be a little Different. I was Surprised that they are actually working on a Bipartisan bill for Immigration reform!
- Baxter

Isn't that great? I’m glad you’re okay. I've been looking forward to your next post!