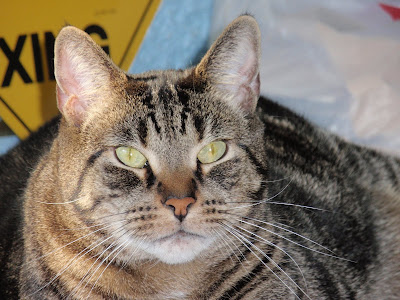 Baxter here. It's been awhile since I Blogged but it wasn't My Fault. My Humans have been Preoccupied. There have been some Changes around here, and I must say I'm not that Pleased.

The biggest Change is that the Humans have brought a New Cat into the Household. She is small, but she is a Harridan. She has been given the Spare Bedroom, where I used to like to go into to Hide Out from That Dog. Now I'm not supposed to go in there anymore! So of course, every Moment I have the Chance, I sneak in and try to eat this Other Cat's food. They give her Wet Food. Now, I didn't used to like Wet Food much. But now that I know this Other Cat gets it, I want it too. It's only Right.

My First Contact with this Other Cat came shortly after her Arrival. She crept into the Humans' Bedroom and started Poking around. I was under the Bed and she immediately made a Beeline to where I was and Poked her Head under! I of course had to Hiss mightily - and she Hissed right back! Then she had the Utter Nerve to go into MY Own Room and Poke around. Luckily the Female Human grabbed her and put her back in what is now known as Her Room after that.

Then the Humans took her AND That Dog up to the Cabin with them. The Other Cat goes by the name "Zoe," apparently, although she is often referred to as "The Little Cat," I guess to differentiate her from Me. I've been called Many Things, but Little is not one of them.

Apparently the Little Cat did enjoy herself at The Cabin. Here is a picture of her sitting on a Chair, which my Female Human took just before they brought her back here on Monday. 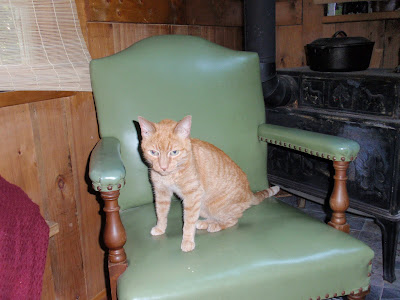 Apparently the Little Cat managed to Tame That Dog while she was up there at The Cabin. They don't seem to have a Problem with Each Other now. But boy, she still has a Problem with ME.

The Female Human just brought her out of Her Room to try to Socialize her a bit since she had been Hiding Under the Bed a lot since the Return from the The Cabin. So the Little Cat was sitting in my Female Human's Lap and I came in just to be Sociable. I did a bit of Rubbing About my Human's legs and was truly very Civil, I thought. Well, the Little Cat let loose with some Hissing, Growling and Yowling that would raise the Dead! You'd think I was Attacking her or something. Jeez. She obviously has No Idea that I am about 4 times bigger than she is, or she wouldn't act like That. But I took the High Road and did not respond In Kind.

So, that's the News here from a Personal standpoint. I suppose I have to Put Up with this for now but I will Seek Revenge someday.

As for the News Elswhere, the BP Oil Spill (which should be called a Gusher) may Finally be Capped soon; after a Day of Waiting to ensure there weren't going to be unintended Consequences (like Blowing up the Ocean Floor and making even More Oil come out), BP is closing some Valves on a new Cap they are Installing on the top of the broken well. Let's hope it works.

So, that is Depressing me a Lot these days. After all, a Lot of us Cats eat Fish, either Directly, or Indirectly in our Cat Food. What will we do if all the Fish are Gone? Many of Us might starve.

In Other News, Dick Cheney got a Ventricular Assist Device on his Heart. I could make all kinds of Snide Comments about whether he actually HAS a Heart, or that his Heart needs all the Help it can Get since he is obviously Challenged in that area...but that would be Mean. As a Cat, I try to take the High Ground. And let's face it, if we were talking about a Member of your Own Family, however heinous you considered their Actions or Beliefs, you probably wouldn't want someone else making Nasty Remarks like that. So I will Bite my Tongue and keep those Remarks to Myself.

This week has not been as Good Week for fans of the New York Yankees. Yankee Announcer Bob Sheppard died on Sunday, followed by Yankee Owner George Steinbrenner on Tuesday. Another Era has Gone.

As a Cat, I am not Old Enough to remember George Steinbrenner back in the Crazy Days when he used to fire and rehire Manager Billy Martin every other day. And the Man really mellowed with Age. In the Obituaries for "The Boss," it is being pointed out everywhere that he was a very Charitable Man and often did generous things Anonymously or without any Fanfare. So, even if you hated George for various reasons, remember he did a lot of Good in the World. And he also was the reason the Yankees have done so well all these last 30+ years. (OK, so if you're a Red Sox fan, you're allowed to hate him for THAT).

On a Cheerier Note, I had a Great Week here at Home by Myself. Sure, I missed my Humans, but I didn't have to deal with That Dog OR the Little Cat. I had the Whole House to Myself. And lest you think I was Jealous that the Little Cat went to the Cabin and I didn't, please Disabuse yourself of THAT Idea. I am not a Traveling Cat. I would've been Under the Bed the Whole Time.

Next time my Female Human posts she will be back to talk about Islam and whether or not the religion and its Followers are the Extreme Threat that Right-Wing Christians seem to think they are. Until then, Enjoy your Catnip and try to stay Calm.
Posted by Mauigirl at 7/14/2010 05:44:00 PM

Listen: don't take any crap off that other cat. Polite is polite, and we all should be civil as long as possible... but don't let the other cat run you over.

Glad you are back though. And i'll say it so you don't have to: Dick Cheney is a robot designed by the energy industry to help create and exploit loopholes in a swelling bureaucracy that is called the federal government. He (like some of the other robots who they have mixed in with the humans in DC) are there only to take away people's liberty and to line their own pockets. His "heart", really an anti-matter power cell, just needed some tinkering. That's all.

I hope there is an expiration date on those robots.

Ah, Baxter--hang in there. Things usually get better.
In our house (two cats and a dog), the older cat--your look-alike--named Cassidy is the laid back one. The younger upstart, named Allie, is the trouble maker. But what really shakes things up is THE NEW BLACK DOG--named Ziva.
Ziva is giving Allie a run for her money. So, cheer up, it could be a war with the dog!

My Daniel Cat says I keep the catnip on a short, rationed leash.

He does Not Approve.

Sir Galahad, our great big fuzzball, manages to find the catnip no matter where we have hidden it. He actually ate half a bag of the stuff that came with his new scratching post inserts by digging through the plastic wrap to get to it. He left behind an empty bag. Sigh.

The smaller the cat the louder the growling and hissing I always say. Take care of yourself Baxter and your human too.

Aha, an invader, an usurper, I mean, a new companion. Good luck with that!

the poor doggie! it's just a matter of time before baxter and the little cat start plotting against him.

Baxter, it's always good to hear from you. You are such a wise cat. Just think of what that poor little kitty has to live up to with a role model like you.

Baxter, you are a model of restraint! I hope you inspected
every facet of The Little Cat's room while she was gone ... and by inspected, I'm sure you know what I mean.

Good to hear your side of it Baxter. You know, that human woman you live with? Well, she is trying hard to have it so everyone gets along with each other. I'm sure if she had it her way, that littlew cat would still be living where it lived before it came to live in your house.
Just take advantage when you can. When the little cat is asleep, go get petted by the humans, that'll piss her off no end!
Boy, am I glad to hear a little baseball talk. I love baseball, but no one writes about it in blogland. Too many of the women would never come and read my blog if I talked sports all the time, so, glad you mention the stinkin' Yankees. I hope the Rays catch their sorry asses and whip them a new one! I couldn't care les about the Red Sox, they suck too!
And Cheney, who cares? He is hiuman, he has a right to life. I just don't care about him, whether he lives or dies. I just don't want him to suffer.

Tell you human Hello and that I'm glad she seems to be feeling better.

Peace to everyone,including that little cat. You understand.

Good done. I appreciate people who share such fresh and hepful ideas with other.