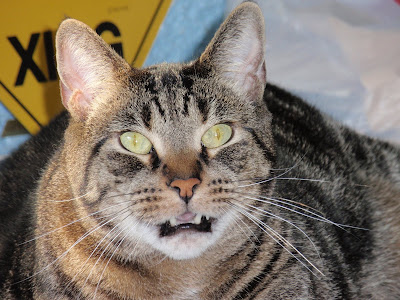 Well, they've gone and left Me yet again! I'm getting Rather Sick of it. Oh well, at least I'm inside where it's Warm and Dry. It seems to be Raining Once Again out there. Now that the Weather has gotten Cooler and the Humans have turned on that thing they call a Furnace, I like sitting on my Cat Perch over the Radiator in My Room and looking out the Window.

Did you know I have My Own Room? I do. It's one of the Bedrooms, and it's All Mine. (Well, my Female Human does have a Bureau and Wardrobe Closet with some of her Clothing in it, and there is a Desk full of Junk, but that's all). My Box and my Food and Water are all in here, and Best of All, there is a Gate attached to the Doorway that I can run under, but That Dog can't. So I am protected from her when she gets Frisky and decides to chase Me, and she also can't get in to eat My Food or, worse yet, forage in My Box. That would be Very Embarrassing.

So. Time for my News Roundup. I don't really know what the Chief Topic of Conversation should be today given it has been quite Awhile since my Last Roundup. But I do know they spent Way Too Much Time covering that stupid Balloon Boy story last week. And now they're saying it was all a hoax! It is Pitiful how the So-Called News Programs latch on to these Stupid Stories and cover them in Breathless Anticipation, as if they were covering a World Crisis. It's like the Boy Who Cried Wolf. When there is a Real Crisis, who will be able to Tell the Difference?

Of course, Conspiracy Theorists will be All Over this, saying this allows The Dreaded Government to Take Away Our Rights. I'm sure it is not anything That Sinister. The stuff that takes away Rights is usually done when No One is Watching, as it was during the Previous Administration.

One problem the Government is running into is not having Enough Swine Flu Vaccine! After all that Preparation you'd think they'd have Gotten it Right, but no!

"'We are nowhere near where we thought we would be,' Frieden said, acknowledging that manufacturing delays have contributed to less vaccine being available than expected. 'As public health professionals, vaccination is our strongest tool. Not having enough is frustrating to all of us.'

Frieden said that while the way vaccine is manufactured is "tried and true," it's not well-suited for ramping up production during a pandemic because it takes at least six months."

Another News Story this week was the Famous Case of the Northwest Airline pilots who forgot to land in Minneapolis as scheduled, and No One could get ahold of them during that time! As the Humans might say, WTF? One of the pilots said they weren't arguing or sleeping during that time. They were also not Drunk. So what else does that leave? Hmmmm. The Mind Boggles. It is truly a Mystery.

My Female Human went to Minneapolis on Northwestern a couple of weeks ago. She is Glad that didn't happen when she was On Board.

In News from the Animal World, a Russian Bear killed a Circus Hand while he was Ice Skating. The Bear was Ice Skating, that is. For the Details, go read the Article here. It is Very Sad that the Circus Hand was killed, and another injured, but perhaps it's because Bears generally don't Ice Skate in the Wild, and perhaps it's not The Best Thing To Do with Them. Sadly, the Bear was shot and killed as well.

On a More Positive Note, I will End with some Pictures my Humans took Last Weekend up near that Cabin they go to. If you recall, Last Weekend was Very Rainy in New Jersey. Happily for Them, it was Very Nice near Lake George!

Here is a Picture of the Scottish Graveyard in Argyle, New York. Seems to Me this would be a Very Scary Spot on Halloween. Look at all those great Leaning Headstones! The Graveyard includes a lot of very Early Settlers - many date back to the early 18th Century. 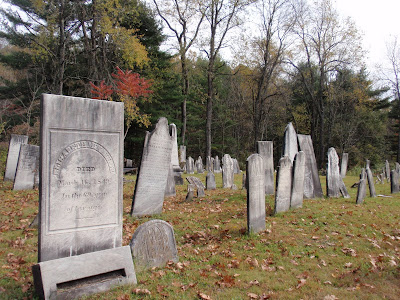 This Picture is a Lovely View of Lake Champlain. 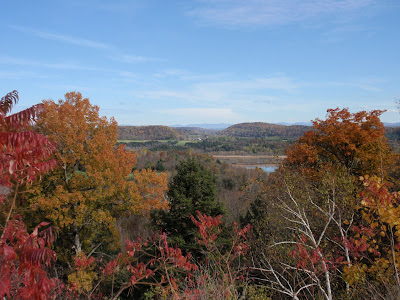 These are the Woods near The Cabin. 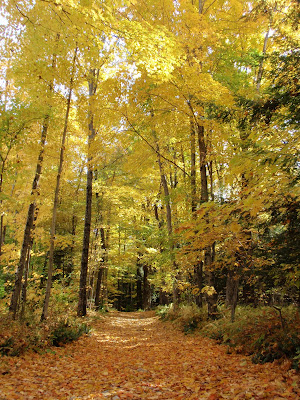 A view of The Cabin from Across the Pond, and below, the Interior with the Propane Lights on and my Female Human sitting in a Chair Keeping Warm by the Woodstove. 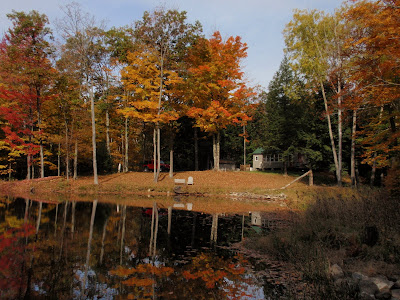 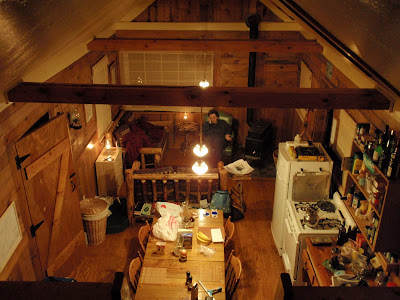 That's all for Now. My Female Human will be Back Shortly. She has received an Award and will be Excited to pass it on to Others!

Till Next Time, keep your Catnip Dry and Enjoy Your Week!

Thanks Baxter. Always on top of everything as every cat is.

I do have to defend the news organizations on the balloon boy incident. Had they NOT covered it and the boy had actually been board or fallen to his death, people would be clamoring to know why no one covered the story. And once it was revealed to be a hoax, that on its own, became a legitimate story. The news business is a double edged sword.

Sorry Baxter, that's just the way I see it.

And I love those pictures... especially the leaf-covered lane (ah, I'm missing Fall here in The Tropics) and the interior Cabin shot.

The paranoia surrounding the H1N1 swine flu vaccine is bizarre.

I think the oddest reason I've heard is from critics who swear up and down that the syringe will insert a microchip into your blood thus giving the government total control over your thoughts and actions.

The graveyard pic is a classic seasonal item. Some people locally here went and vandalized a very old cemetery... as in knocked down & ruined ALL the headstones. WTF were they thinking?

Love the seasonal colors-- quite beautiful.
The cabin photo is nice.

AS for the bears-- I went to You Tube & keyed in ice skating bears.... OMG! I don't blame the bear for deciding the circus administrator should be a snack. It is so exploitive to have bears doing this unnatural display.
Now they know what bears talents really are.
the bear just about bit off the administrators leg, and snapped his neck.
Sad they killed the bear.... it was just doing what bears do. Clearly it could not be a circus performing bear anymore.... but that was probably exactly what the bear was thinking!

Anyway the H1N1 situation is heating up, and the numbers the media is reporting does not match up with the CDC page.... well over 2000 deaths, media says 1000??? Maybe they mean 1000 in the last few months??
In any case.... when they used to carry 8 ounce size bottles of hand sanitizer, now I see they are carrying 1/2 gallon sized containers!

I am being careful to make sure that I don;t touch things after handwashing.....
workplace sinks have motion sensor water faucets, but a touch/push soap dispenser.... which kind of negates the faucet....

Once hands are washed, it is suggested one use the paper towel to turn off the faucet, & touch the door handle. I've seen other folks opening the push door using their elbow or back side of their arm- therefore avoiding a high touch zone. Not everyone is washing their hands or using these techniques.

GO BAXTER! GO BAXTER!! Keep that frisky dog in line, and all will be well with your world.

It is really a wonderful environment that you live in. I've been there in the fall a few years back and it was beautiful.

Frieden said that while the way vaccine is manufactured is "tried and true," it's not well-suited for ramping up production during a pandemic because it takes at least six months."

Ah, but they've been talking about this coming back around for more than six months now so they had ample time to prepare--they just neglected to do so.


Mike Taylor
Great blog! I will be back!