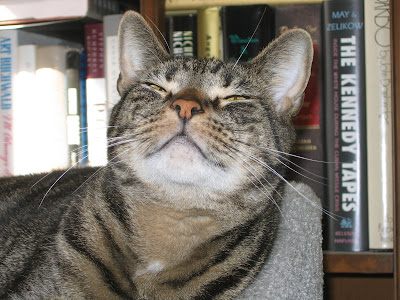 Baxter here. It's been a Very Long Week. My Female Human has been so busy at that place she goes to every day that she hasn't been getting Home until 8:30 at Night! And after that she tells me she's "too Tired" to help me Type my Blog Post. Humph! The Nerve. After all, I would be the one doing all the Work, thinking of the Profound Thoughts to post.

Well, be that as it may, I'm finally here, so I hope you are all Grateful for THAT. There were so many good Stories this week that I wanted to share with you. Some of them may be Old Hat now but I will mention them anyway.

First, of course, I have to talk about that amazing Landing that the U.S. Airways pilot made in the Hudson River! It is Fantastic that all 155 Humans made it off that plane alive and all but one weren't even hurt! The pilot was 57 years old and very Experienced. My Female Human thought pilots were still required to retire at 60 but when I did a little Research I found that actually they raised the age to 65 about a year ago. That is Good News because whenever you hear about a Pilot doing some Great Thing they always tend to be 59-1/2 and about to retire.

In Other News, I am happy to have heard that the Obama Human, whom I now refer to as the President-Elect, has made some Very Encouraging Statements recently in terms of what he intends to do as President. For instance:

The President-Elect's advisers have stated that President-Elect Obama will issue an executive order to close the Guantanamo prison immediately upon becoming President.

Eric Holder, nominated to be the Attorney General, stated succinctly that waterboarding is indeed Torture and that President-Elect Obama will issue an executive order on new interrogation policy during his first Week as President.

So Things are Looking Up! I know some have been getting Nervous about what the Obama Human will really Do when he becomes President. But so far, so Good. We shall see if he follows through on All of his Promises.

Something else to cheer us up: Finally, this Weekend begins the Inaugural Celebrations. President-Elect Obama is on his way to Washington by Train, the same way Lincoln came to Washington. It seems as if it has taken Forever for the current President to just GO AWAY and let the new one take Over. Finally the Time has Come!

In Other News, Israel has announced they will declare a Cease-Fire in their Conflict with Hamas. Apparently they think they have Done enough Damage to Gaza - for Now.

You know, as a Cat, I have a certain Viewpoint about the whole Israeli-Arab conflict. And it applies to India and Pakistan too. From what I understand, that country called Great Britain used to own these Lands and when they decided to let them go, they figured they'd make some Improvements. So they declared a certain amount of Land should become the Jewish Homeland of Israel, making that a Jewish State and separating the Jews from the Arabs. Over in India they divided up India based on Religion and made the Muslim part of it become Pakistan. Maybe I'm OverSimplifying things, but this didn't seem to work out very Well.

Seems to Me, people get along better if they live Next Door to each other. You put up a Wall, and suddenly they don't get along.

It's a lot like Cats and Dogs. As you know, I live with That Dog, and while I am not at ALL fond of her, I Tolerate her. She doesn't bother Me all that much and we live in Relative Harmony. But if she sees a Strange Cat in the Yard, she chases it! Some Cats that live with Dogs actually like their personal Dogs. But if a Strange Dog came along, they would Puff Up and Hiss and possibly jump on the Dog's head and ride it down the Street. So what I am saying is, Familiarity leads to Friendship, or at least Tolerance. But Divisions lead to Hatred and Discord. I don't know what the Solution is, but I think we can All agree that we should blame the Problem on the British Empire and anyone else involved in these Decisions. I'm sure Everyone Meant Well at the Time but sometimes there are Unexpected Consequences. (No offense meant to any of my British Fans!)

Let's see, what Else has been Happening? Oh yes, some of you might not have heard THIS story. It's a Winner. Seems some Guy on Long Island gave his Wife a Kidney while they were married. Now things aren't Going So Well and they're getting Divorced - and now he wants it Back! (She's had the thing since 2001, so is probably quite Attached to it).

Apparently the Husband thinks the Wife cheated on him and so he's saying he wants the Kidney back or else a settlement for $1.5 million! She says she didn't Cheat and anyway she could've gotten a Kidney from one of her Relatives so it wasn't worth what he said it was. Sheesh, these Humans. They are Very Strange.

Well, that's about it for This Week. If I find any New Tidbits I'll be sure to share them with you. For now I think it's time for my Dinner so I have to go Meow at my Humans and Complain because my Dish is Empty.

Wow Baxter, I am impressed, you wrap things up very well and are right on top of things.

Baxter, I am grateful to see you at last, and I think you are very wise.

I too am excited the inauguration is almost here.

What a wonderful synopsis of the past few days Baxter!! Now, if you have nothing better to do, and if you are like my cat...you will probably go hack on the rug somewhere...but we (the humans) still manage to love ya!

you have been tagged if you want to play

Hi~ Funny you should mention the clergy for the inauguration, ust did a post on the list. Wow~ let the diversity flow.

I had not heard about the kidney squabble. Unreal.

I am psyched for the inauguration..... record it for me Baxter, while you are just lying around all day anyway.
Slacker!

Yes, our long, national nightmare is very nearly over.

Eight years that feel more like 800 years and we survived it.

Yo Bax... You have lots to say here. I, too, like that the Presideent-elect will undo some of idiotic policies of the Bush Administration. My hope is that he displays the political courage to try them as war criminals for approving torture. As for those LI folks...well, some dysfunctional moments are just too stupid to laugh at. As for you and your canine co-habitor, Chester says hi and asks how he likes living with you... he's a dog after all and has some trouble taking just your word for it.

Baxter explains things so perfectly. Is he angling for an envoy position to the Middle East?

I read somewhere that the kidney guy claimed the $1.5mil was mostly for "the pain & suffering" his kidney endured since it was forced to watch his wife engaging in an adulterous affair. Talk about having eyes in back of your back!

I am so glad Maui finally let you get to the computer!

Talk about an Indian giver.

This is one of the passages that I found quite moving because it was a sharp disavowal of the Bush presidency’s aggressive warmongering record:

As for our common defence, we reject as false the choice between our safety and our ideals. Our Founding Fathers, faced with perils we can scarcely imagine, drafted a charter to assure the rule of law and the rights of man, a charter expanded by the blood of generations. Those ideals still light the world, and we will not give them up for expedience’s sake. And so to all other peoples and governments who are watching today, from the grandest capitals to the small village where my father was born: know that America is a friend of each nation and every man, woman, and child who seeks a future of peace and dignity, and that we are ready to lead once more.