Update on the Lake George Property

We just returned from our trip to the Adirondacks and I thought it was time for an update on the purchase of the property we’re buying near Lake George.

The perc test is done, and the soil tested well. (For those who don’t know what a perc test is, it’s a test to see how well water “percolates” through the soil). This is something that is necessary if you want to put in a septic system. The cabin we’re buying doesn’t have one; it has a simple holding tank. We wanted to know whether we could upgrade to a septic system one day, and were glad to hear that we could.

We have also hired the surveyor to survey the property; he is supposed to be doing this in the next week or so. And we got the word today that our attorney has received the results of the title search, and all is well in that regard.

While we were in the area over Labor Day weekend, we took the opportunity to visit the property a few times.

The first time was to test whether our car can get up the steep gravel roadway. When we first went to the property with the realtor, she drove us up in her 4-wheel-drive SUV, as she wasn’t sure our car could make it. We were very pleased to find that our Saab 9-5 wagon went up the road with no problem whatsoever. In the winter, it might be another story, but we’ll worry about that later!

The first visit was on a cloudy day, with slightly threatening skies. When we pulled into the yard, we were surprised to see that the pond’s look had changed since our last visit – no longer looking like primordial pea soup, the pond was now clear and dark, still mysterious, but with no algae bloom at all. Apparently it is only a seasonal problem.

As we got out of the car, we noticed several disturbed areas of the water, and realized there were several small heads poking above the surface. As we watched, they swam around, and one of the creatures started squeaking at us. Apparently we had disturbed a family of otters that like to visit our pond! They were not happy about our appearance. Two of them disappeared from view, but the head of the clan continued to express his (her?) displeasure at us and at Diva, who was quite interested in his presence! From what we can figure out now that we’ve Googled them, they are apparently Northern River Otters. If anyone else has any idea whether we are correct or not, please let us know. It's kind of hard to see in this picture as the closeup is blurry but they have little narrow heads that stick out of the water like miniature Loch Ness Monster heads. 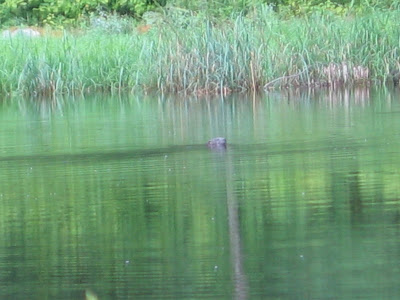 We took a walk around the pond and scores of tiny frogs hopped before us, jumping into the water, while an Eastern Wood Peewee called in the woods. (He later appeared in person to sit on a dead branch overlooking the pond, periodically leaping from his perch to catch insects in the air.)

On the outer wall of the house facing the deck, we had noticed at our first visit that there were areas where the paint and part of the wood had been worn off. We had speculated that perhaps deer come up and rub their antlers there. When we returned this time, there were further areas worn off. Diva was extremely interested in these areas, and sniffed and rubbed her own shoulders on them, and finally decided it was worth rolling around on her back about. 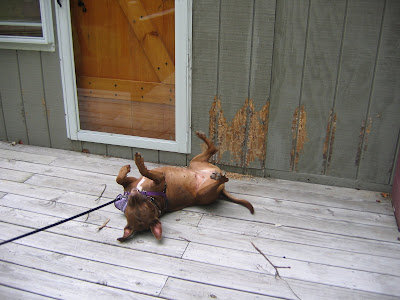 The next two times we visited the property were for no good reason except to walk around and look at it again. Both of these visits were on beautiful sunny days, so DH took a few more pictures of the pond and the cabin. 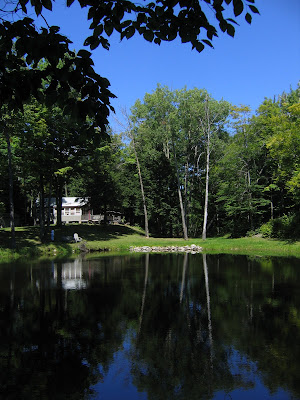 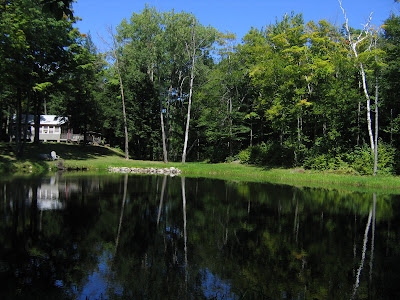 Updated: One more of Miss Diva, impatiently waiting to go on a walk! 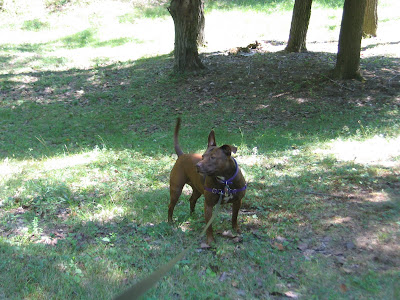 I’ll continue to keep you posted!

For those of you who are fans of Baxter, he will be posting in the next entry, including his special view of the latest political scene.
Posted by Mauigirl at 9/02/2008 03:00:00 PM

Boy that sounds like a nice property Maui! You should take some pics! Doesn't sound so Hawaii looking to me though, LOL. Take care!

That property just sounds better and better. I'll be interested to find out if those are really otters.

I wish you both the best of luck in your new digs.

ah, how exciting for all of you. i've always dreamed of staying in a little cottage by the woods. your pics reminded me of that dream. glad you had a nice weekend! =)

Nice place ya have there. Shame if something were to happen to it.

Wow how cool!
It looks like such a great place.

BEE-YOO-TEE-FUL!
I love the otters. We had rats on our little Texas farm. And snakes.

But we also had many deer and the bucks did rub their antlers on everything. We rubbed garlic oil on the places we didn't want them and put fencing around the fruit tress, since they cut rings around the bark of a few peach trees, which killed them.

That property looks heavenly, I hope it all works out for you. It will be a great investment.

Wow! Congrats on your new place. I'm really envious, but happy that things are shaping up. As for the getting the Saab up the driveway in winter, you may want to talk to one of the locals or officials in your nearby town about keeping the driveway plowed and sanded. It may cost a few extra bucks, but it's worth it.

and your sweet little poochie is adorable.

Otters are sooo cool! If there are fish in the pond then you'll have them for neighbors.

They may avoid the pond if they know Diva is around, though.

Wow - that is some lovely country, Maui! Just gorgeous and peaceful.

Thanks everybody, for all your good wishes!

We are continuing to move ahead - just got word that the title insurance is done, and we're just waiting on our survey to be complete. So fingers are crossed that we'll close soon!

Randal, LOL, we're going to be "off the grid" so hopefully Dick can't find me!

Maria, thanks for the advice about the garlic! We'll try that!