The Land Down Under

I can never think of the words "The Land Down Under" without thinking of Men at Work's song...here's a great little YouTube version of it with some interesting factoids superimposed on the video. Enjoy!
http://www.youtube.com/watch?v=Jd1AT7V4-E8

Well, in case you hadn't figured it out, I made it. Despite snow, sleet and freezing rain, I made it to the airport (thanks to a good friend who volunteered to drive me there). The plane actually took off only an hour late (thank you American Airlines) and arrived only 45 minutes late to LA. This gave me plenty of time to make it to my Qantas connection in the international terminal next door. I read 1-1/2 books on this flight and ate a not very good meal.

Qantas was awesome - lots of legroom and I was lucky enough to be in an aisle seat in the middle section of a 747 with only one other person, on the opposite aisle seat. Plenty of room to spread out.

During the 14 hour flight to Melbourne, I managed to occupy myself with no problem. Here is a list of my activities:

- Read 2 more books
- Ate a very good meal of chicken and rice, Spanish style.
- Slept about 6 hours
- Ate a snack (provided at the beginning of the flight so as not to disturb you)
- Watched a movie ("A Good Year," with Russell Crowe, about a London stockbroker in Provence. I now want to move to Provence).
- Ate a lovely hot breakfast
- Slept some more.

The flight to Adelaide was enjoyable - the pilot was the kind of pilot that likes to make amusing and literate remarks while you are traveling. With the Australian accent it was even better. And, they even served "mid morning tea" as part of the one-hour flight. Not like in the U.S.!

DH was waiting for me with a big smile and whisked me off to the hotel, which is in a great location and consists of a two-room suite and a kitchenette. Our computers hook up nicely to their ethernet cord and it's a great little home away from home.

The weather here is HOT. They call it 40 degrees but we call it 105! But it's a dry heat, and not all that unbearable. We took a walk on the beach right outside of Adelaide at 8 a.m. the first morning after I arrived, and then toured the Fleurieu Peninsula, which has great beaches and lovely wine country.

Follow the map for our route. We left Adelaide, went south along the coast, turned inland at McClaren Vale, drove down to Victor Harbor, over to Goolwa, and back up to Adelaide.

This is Maslin Beach, one of the beaches we stopped at. 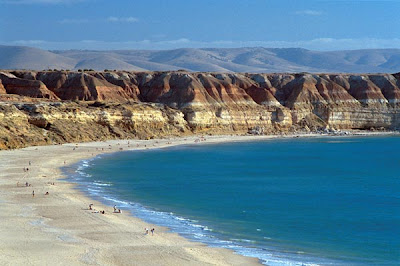 The weather here has been very dry and the land all has that kind of parched, bleached look that drought-ridden areas get. But the vines all look healthy in the vineyards and the eucalyptus is doing just fine.

The streets of towns were relatively deserted, as the native Aussies apparently don't go out when it's 105 degrees. However, "mad dogs and Englishmen...and apparently crazy Americans...go out in the midday sun!" as the old song goes.

Yesterday we drove north to explore the Clare Valley, another area rife with vineyards. We stopped in an antique store in a town called Auburn and had a long conversation with the owner, who recommended we tour a nearby stately home. It was definitely worth the visit and we were glad to have had the recommendation.

Since I am checking e-mail, I was able to receive an e-mail from the veterinary surgeon who took off Diva's little bump. It turned out that the bump was indeed a mast cell tumor, despite its very unthreatening appearance. Our regular vet was right to be concerned about it, and it turned out I was right to take the more aggressive approach and just have it removed completely.

The vet said that the excision was complete and the surgery was curative. It was a Grade 1 tumor (which is a less aggressive type) and was of course very early since she only had it a couple of weeks.

It's good to know we did the right thing! Diva is a lucky girl!

Glad you arrived safely. Lap up some of that sun for us! So glad that Diva's lump was removed. As you say you did the right thing.
Have fun!
Rx

Thanks Ruth! I have been going to the beach the last two days and am heading out again to it today!