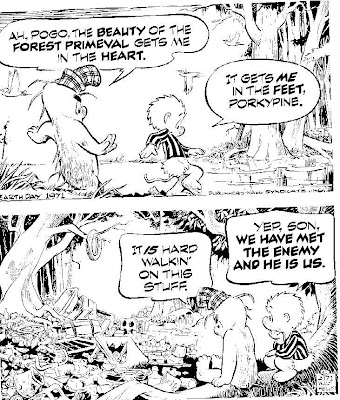 Yes, as cartoonist Walt Kelly famously said, "We have met the enemy and he is us." It isn't those scary "Arabs" or those much-maligned "Islamist terrorists" who are to be feared. It is the home-grown hate groups that exist right here in the United States, who have no connection to these other groups.

What am I referring to? This: Obama Has More Threats Than Other Presidents-Elect.

According to the AP,

"Threats against a new president historically spike right after an election, but from Maine to Idaho law enforcement officials are seeing more against Barack Obama than ever before."

According to the article, there have been more threatening writings (both on-line and off) and other activities than have been seen for any other president-elect. Strangely, the Secret Service is cautioning the public not to assume these threats are "due to racism." Hmmmm. So what else is it based on when there are signs in Idaho talking about a "free public hanging," in reference to President-Elect Obama, a rise in racially-motivated graffiti, and worst of all, a rise of +2,000 members in a white-supremacist group the day after the election?

Thankfully, the investigations into the Obama-related threats so far have turned up no truly credible plots. But we must keep a close eye on these groups that threaten the future of our country, and the benighted bigots out there who just can't deal with the idea of a President who is a different race from themselves.

Most people who opposed President-Elect Obama have accepted the outcome of the election and are moving on. They acknowledge that he won and support him. Many even cheered his election as a step forward for America, even if they voted for John McCain.

It is those who refuse to accept this step forward and threaten the new President who are bent on destroying this country. They must be stopped before they do any harm -- they are the real terrorists we have to watch out for.
Posted by Mauigirl at 11/15/2008 01:41:00 PM

I figured this would be the case. I pray for his safety every day. The damned McCain/Palin freak show did much to stoke the fires of hatred in this country. But it was well along without their disgusting assistence. I suspect I will worry until his presidency is over.sigh

It's very sad and frightening.

I worry about President-Elect Obama, too. I have witnessed first hand the hatred and vitriol that people here are spewing and it's not that many steps to violence.

I hope that incidents of hate crimes against minorities don't increase as a result of this perceived threat that white America is under assault.

Feather, me too. It's something I've worried about for awhile now.

Ruth, it is frightening, you're right.

DCup, these people do feel threatened and thankfully a generation or so from now most of them will be gone. The country will continue to change into a more tolerant and diverse place to live - which is of course what they're feeling threatened about.

I think it is really important that you are pointing out the threat posed by these domestic terrorists.

indeed. i do hope that the secret service is up to the task. then again, i'm sure obama knows this, and has taken precautions.

cool that you have a reverse prop 8 banner. :)

the pot that palin stirred up (and mccain) is not going to go away - it may get quiet, but it will not disappear.

the vigilance of the FBI and secret service must be stepped up a couple of notches....

An excellent source to track the numerous hate groups in America is the Southern Poverty Law Center.

Only 4 states don't have known hate groups. Large states like Texas, California and New York have the most.

The elevation and election of Barack Obama has angered more than the PUMA lunatics. Hate groups from Maine to Montana, see Obama as the rallying point to attract new members.

All I know is, the Secret Service had better the hell to do its job and not slack off.

I hope the FBI and Homeland Security will watch these wingnut groups and do what they have to do to stop them. They're probably too busy spying on those America-hating war protesters and swarthy foreigners.