Hi everybody! Mommy said it would be OK if I blogged today as she is busy, and Baxter isn't in the mood.

First, if you think this place looks kind of different, you're right, it isn't your imagination! Mommy said that since Obama's election, it is now a new day - so it's time for a new look for the blog! Hope you like it!

Mommy says she is having trouble getting used to the links lists being on the left instead of the right, but I'm sure she'll get used to it. I know how to get used to new things - I'm the queen of adjustment here! Get me to do something for a biscuit, just once, and I'll expect a biscuit every time I do that particular thing!

I don't have a lot to say about the election because we dogs don't think that much. But we're good at being happy about things, and I'm really happy about it! My tail has been wagging since last Tuesday! Baxter will have more to say when he gets his turn to blog, I'm sure.

One reason Mommy wanted me to post today is because she took pictures of me on Halloween and wanted me to share them with you. They put a witch's hat and a funny fluffy thing around my neck. I kept trying to get the fluffy thing off, because it tickled. They finally had to take off my outfit before I destroyed it but at least they got a couple of pictures! Do I look silly? If I do, I don't care, because I'm a dog, and we don't worry about that stuff the way cats do. 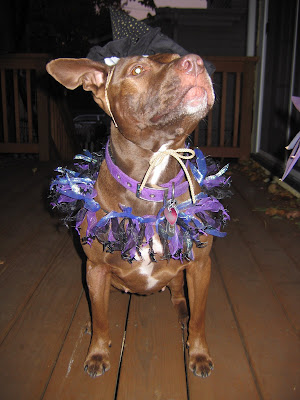 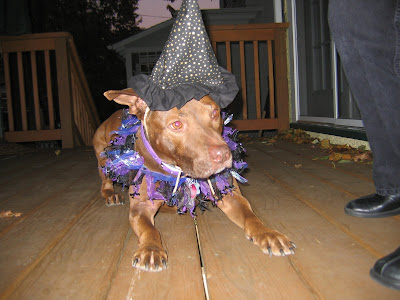 As for the political stuff, my biggest interest in what will happen during the next administration is, what kind of dog will President Obama get for his kids? This is a huge decision because it is very meaningful to so many people, and of course to us dogs. Whenever a President picks a First Dog, that breed becomes very popular.

Mr Obama says his daughter is allergic to dogs so that narrows down the choice a bit. But I wonder if this "Golden-Doodle" dog that they're thinking of is really all that hypoallergenic? Sure, Poodles are hypoallergenic, but I don't think Golden Retrievers are.

Heck, we Pit Bulls don't have much fur. I wonder if a Pit Bull would do the trick? I bet they haven't even though of one of MY breed. We are great with kids! Not only that, but picking one of us would be very symbolic. We Pit Bulls have to overcome lots of prejudice and myths about our temperaments in order to get back to being the "all-American dog" we once were considered to be before our reputation got dragged in the dirt. And Mr. Obama has had to overcome prejudice to get into the White House. Why not choose a Pit Bull and help repair our reputation as part of the Change he is making?

Speaking of which, for once there is good news story about a Pit Bull instead of the usual bad stories they always publish. Seems this stray Pit Bull saved a lady and her child from a mugger who threatened them with a knife! The dog might just be lost rather than a stray, but if they can't find the owner, the lady is going to adopt him! I love hearing good stories like that.

Well, whatever dog the Obamas choose I'm sure they are going to be great dog parents and the dog will be a very lucky one! I wish them all the best in their new life!
Posted by Mauigirl at 11/10/2008 12:02:00 PM

Diva, Smokey is also very interested in what kind of dog the Obamas get. He thinks it should be a schnoodle since they are considered hypoallergenic dogs . . . and also because they are bi-breedal and President-elect Obama is biracial. But he likes you a lot, so he thinks your idea is a good one too. Really, he doesn't care much as long as no one tries to make him leave us and go live in the White House himself.

Ha! I love you, Diva! You're too adorable for words. I absolutely love me some pitties, and it would be super cool if the Obamas got one of you guys.

Phoebe and Buttercup are bi-breedal as well and say kudos to the Obamas.

I love the pitbull story!!!! I'll be passing that one around for sure.

I've actually been obsessed with a little brindle staffie boy that we've been seeing on the trail every day, name of J.C.

Just 'cause you're tough(except for maybe during thunderstorms) doesn't mean you're anything but sweet.

I hope you got lots and lots of treats.

Hey Diva, Ginger goes in next Tuesday for her dental. She's healthy and I want her teeth to stay healthy but I'm already having anxieties 9 days out. I worry about Ginger as she gets older and she goes under sedation.

I suppose I will always be a nervous parent.

Diva, you must not have known this but it is considered abusive to dress up creatures such as yourself in human clothing. If you wish to sue, please let me know and I'll file the papers for ya. On another note, I'm for the Lab/Poodle mix. Maui, i have read all the posts and am reasonably up to date, but as usual, no time to comment on them all. Take care!

Ruth, perhaps a Schnoodle would be appropriate too! I think whatever they get, it will be a good dog just as I am!

Thanks Helen, glad you like the new format and am sending wags and licks to your furbabies!

Thanks, Dave, and you are right. I love all the people I meet!

DCup, glad you liked my look!

Christopher, send Ginger my best wishes. I'm sure it will all be OK. I've been lucky not to have needed dental work, as I have very good teeth - must be all those Greenies I eat - but Baxter has had his teeth cleaned under sedation several times (and some pulled too!) and he's been fine.

Feather, I so appreciate your support but actually they only left this on long enough to take the picture. I tried to get the fuzzy thing off right after that so they had to take it off. And they NEVER dress up Baxter. He would not put up with it!

The venerable Black Dog recommends one in His image. Unfortunatrly, there are few combinations of beagle, lab, corgi, and chow to be found in the world.

I'm looking fwd to whatever dog the Obamas get. I'm pulling for a little boston bull or fox terrier, but only because I've failed to convince the hub about them. He's a Big Dog man. He would swoon over Diva, costume or no. Our old Lab Mix who died a few months ago probably had a little Pit in her. I can see a definite resemblance to Diva around the short snout & floppy lips & wide blocky forehead. We used to wrap a grandma scarf around her head & call her "babushka" for h'ween.

JR, Black Dog is an interesting combination! I think his "breed" would make a great First Dog.

D.K., sorry to hear of the loss of your dog - our previous dog Alice was a Lab/Pit mix. They make a great combination.

Thanks, Sue J! I figured Change was in the air so I'd go for it!