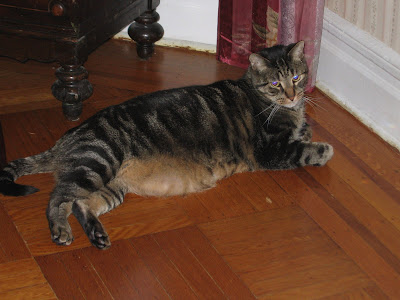 Baxter here. It's about Time I had the Opportunity to Post again. Of course, I can't complain Too Much. My Female Human is involved in the NaBloPoMo thing and has had to Blog every Day this Month and sometimes she isn't in the Mood to take the time to let Me type. I'm kind of Slow. I'm really better with the Mouse than the Keyboard, after all.

We had some Excitement around here tonight. That Dog kept barking and barking. She was being Very Annoying. Finally my Female Human made her go Outdoors in case she had to Go. It was Very Cold so my Human didn't go outside with the Dog to watch and see what she was doing.

Well, That Dog was out there for awhile and my Human kept hearing her Collar jingle but she wasn't coming back. Finally my Human went Out to see what was the Matter.

Well, it turned out That Dog had managed to tunnel under the chain-link Fence into the Neighbor's Yard. That Neighbor also has a fenced-in Yard or That Dog might have been Long Gone. (Darn, that would have been Great!) The Neighbor also has lots of fellow Felines who are Outdoor Cats. My Human didn't hear any yowls or barking so apparently the Cats made themselves scarce while she was over there.

The thing about That Dog is: she knows how to tunnel Under the Fence to get into the Other Yard - but she can't figure out how to get Back! The Male Human had to go around to the Neighbor's gate and open it and bring home That Dog on her Leash. She was Severely Chastised and has been keeping a Low Profile for the rest of the Evening, much to My Delight. I love when That Dog gets in Trouble.

Moving on...so Today the Senate Democrats let that Lieberman Human stay in charge of his stupid Committee. What's it called? Homeland Security? They should change that Name. Sounds like something out of World War II Nazi Germany. (I watch a lot of the History Channel, that's why I know about it. No, I was NOT alive back in World War II. I am a YOUNG Cat.)

Lieberman gave credit to President-Elect Obama for saving his Hide, since the Obama Human had indicated he did not want to see Lieberman Punished for his Behavior during the Election Campaign. Lieberman said:

"'I know that my colleagues in the Senate Democratic caucus were moved not only [by what]...Sen. [Harry] Reid said about my longtime record, but by the appeal from President-elect Obama himself that the nation unite now to confront our very serious problems,' Lieberman said in the Capitol as those colleagues nodded in agreement behind him."

I know a lot of the Fans of the Obama Human thought that the Senate should have stripped the Lieberman Human of his position as leader of that Committee, or even kicked him off it completely.

But you know what? The Obama Human is crazy like a Fox, as the old saying goes. He now has the Lieberman Human right where he wants him! He owes Obama BIG TIME. So someday, President Obama will ask Sen. Lieberman for a favor. And he will have to grant it.

There's another old saying - "Keep your friends close, but your enemies closer."

And that goes double for this idea of having the Hillary Human be Secretary of State. He gets her out of the Senate where she could be a roadblock to legislation he might support that she might not agree with. And he gets credit from her Supporters that he gave her an important Position. Plus she does have experience and Worldly Knowledge.

He will have to be Careful though. Sometimes these things don't Work Out. For one thing, there's her Husband Bill to worry about. He's always kind of a Loose Cannon. Plus the Obama Human will have to make sure the Hillary Human carries out his own Policies, not hers. Of course, the other Advantage to having her as Secretary of State is - he could Fire her if he didn't like what was going on. He can't Fire her if she's a Senator.

So, as a Cat, that's My Take on things This Week. We will see what Else happens as the Obama Administration starts to take Shape. So far the Obama Human is one Cool Cat. I haven't seen his Fur ruffled one bit yet. It will be Interesting to see what other Appointments he makes in the next few Weeks.

It's been good Talking to You All again. So until next time, have some Catnip, relax and Celebrate some more that this Country is finally going to go in the Right Direction. It might even call for a Bowl of Cream.
Posted by Mauigirl at 11/18/2008 10:01:00 PM

Baxter, you are always so wise. You're a pretty cool cat too.

We're assuming that Holy Joe will pay up.

Baxter, tell your female human that she has an award waiting on my blog.

Thanks Baxter, for putting it all in perspective. I was not so keen on the Hillary as SoS appointment, but now that you mentioned the ability to fire her, should she be out of line, well, I'm warming up to the idea.
Probably the biggest liability is Bill- he's going to have to change his speech making for big bucks schedule around so there is not the appearance of conflict of interest.
Hmmm maybe there is some genius to this appointment after all.

As for the Leiberman.... if he's out of line he will be ditched faster than McCain can call joe the plumber, or Palin can wink.
Lieberman likes to think he's an important power player, but he's not-- maybe if he was, they would have dumped him outright.

If he becomes problematic, he get's thrown under the bus (straight talk express)......

Still most consider him finished. This is his farewell tour.

I hope the dog does not become a Houdini
Escape artist. You'd miss him.

Baxter - your description of the dog incident sounds a lot like when Resident Evil tells a story about The Actor!

I have to say, initially, I was appalled at the thought of the Borg Queen becoming Secretary of State.

I can't stand her. She's a neocon in a pantsuit and her behavior during the primary playing the race card was the final straw.

But the more I think about, the better it may be for New York. For one thing, Gov. David Paterson gets to appoint her replacement if she accepts the offer and what I'm hearing is, Patterson will likely appoint New York AG Andrew Cuomo.

Cuomo is great. He's a real liberal (not a DINO Dem like the Borg Queen) and he has a proven record of support on LGBT rights.

I say, Hillary, darling, let me help you pack! Your C-130 to Bosnia leaves tomorrow! LMAO!

Baxter...you are such a wise cat. And definetely well fed...I should introduce you to my friend, Jack the Cat...he weighs in around 19 pounds of fluffy love.
As for politics...I cannot bare to discuss them right now, but once I get my wind again..I'm on it.

Baxter, you look very well fed... but I can give you a run for your money. I will get Snave to post my picture sometime at his weblog, and you will see what I mean.

Baxter- you always have such words of wisdom.

I am glad that you posted!

Obama is one cool cat!!

Hi all - from Baxter:

Sorry I hadn't had a Chance to respond to your Notes until now.

Randal, you have a Point. There are no Guarantees about him paying up.

Ruth, as you now know, I did tell my Human about the Award. She is Very Grateful.

Fran, I do think the Obama Human knows what he is doing so I hope both of these Decisions are the right ones. As for That Dog's escape Route, it has been Repaired and she can no longer get under the Fence. I certainly wouldn't miss her if she Escaped but my Humans, for some reason, Like her, so for their Sake I hope she doesn't.

DCup, that is Not Surprising. My Relationship with That Dog is a bit like Sibling Rivalry after all.

Christopher, I had not thought Ahead to the Affect the Clinton Human's departure from the Senate would have on New York. You are right, Cuomo would be a Great Choice.

Deb, I am sure Jack and I would Get Along. By the way, I outweigh him by 3 lbs.!

Baby Zekie, I would love to see Your Picture. Please ask Snave to post it!

FranIam, I'm glad you enjoyed my Post. It is always Great to see you too.

I know I'm late ... just wanted to pass an idea for dogs digging under the fence ... we had a dog that simply would NOT stop doing that ... tried many things ... what worked was my husband buying a roll of 3-ft wide chicken wire, digging a trench down a minimum of 1-ft, tie-wiring or stapling the chicken wire to the fence, weighing it down with bricks or blocks or big rocks in the trench, then covering it all up of course. The dog cut his paw on the chicken wire one time, but that was the only casualty. We had to do that to 2-acres of fencing, but it was worth it to keep the dog safe. He was a biggish dog, but no match for a cougar or a pack of coyotes. For years, he would still walk the fence line every day looking for a way out, even though he had plenty of things to occupy him in our avocado grove -- birds, squirrels, gophers, the occasional skunk, etc. We eventually buried him in that grove, near the fence line so he could keep looking out.