Greetings from the Frozen North

We decided a few weeks ago that it would be nice to spend a couple of nights in the Adirondacks after Thanksgiving since we had a long weekend. We wanted to go check on the progress of the work being done on our cabin, as well as just get away from it all.

But we weren't sure what the weather would be like. After carefully checking the 10-day forecasts for the Lake George area, we decided it was safe to reserve a cottage at Adirondack Country Cabins, which we noticed when we were staying in the area in October. We had checked at that time and ascertained that they were open all winter and they allow one "medium sized" dog.

We invited DH's dad to join us since the cabin has two bedrooms. We took separate cars and arrived at almost the same time. There were traces of snow near the cabins but nothing major.

We had brought some new bamboo shades with us to bring over to our own cabin, so we immediately drove off to leave them there before it got dark. As we drove up the steep hill toward our property, we saw more and more snow along the side of the road and in the woods. By the time we got to the turnoff to our road we realized several inches had fallen in these higher elevations - and our gravel road was covered with it.

Even though other vehicles had apparently flattened out the snow on the road, it was so steep and icy that our car couldn't make it up the hill! We tried getting a running start, but to no avail. So we parked on the main road and walked in. Luckily it is only two-tenths of a mile off the main road to our property, and it wasn't very cold, so we made it with no problem. It's lucky Ed's dad is in such good shape - better than me, I might add.

Part of the new roof has been put on the cabin, the pine floors have been installed inside, and the deck has been finished around the back of the house and a gate added at either end, so Diva will be able to sit out there in the summer without being tied up.

We didn't spend a long time there under the circumstances - it was going to get dark soon and we didn't want to be walking down the icy road in the dark. But DH did take a picture of Diva and me in front of the cabin with his cell phone camera, so I thought I'd share it with you so you can see the snow. 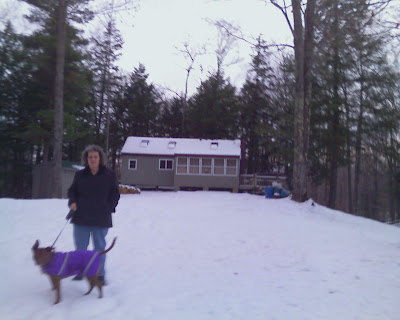 Look at you and Diva in the snow! Fabulous!

You are brave for getting up the mountains in that weather. I hope you're having a good time. Sounds like great progress is being made on the cabin.

LMAO! Look at Miss Diva in her swell winter coat!

We bought one for Ginger in a taupe color and she loves it.

Dogs are endless amusing. They really enjoy dressing up.

winter sure came fast to northern ny - you know i have never been to lake george.

i bet diva likes playing in the snow

Hi DCup, yes, the cabin is looking good. He's got the slate all ready to go under the wood stove and all the pine floor looks wonderful.

Christopher, Miss Diva was given to us along with a red winter coat that she had when she was at the Animal Farm rescue. She managed to rip it up (she has a tendency to get silly and tear up her coats!) so we got her the purple one. She always loves putting on her coat in the winter - she has such short fur I guess she gets cold! Our old dog Alice, however, didn't want a coat. Her fur was a lot thicker so I guess she didn't need it.

Hi DCap, yes, Diva had a great time - she got very silly and ran around on the deck like a nut in the snow!

Just remember: remote cabins in the woods is where horror movies happen, so don't be surprised if, one dreary, snow-filled night, you hear a knock at the door and the knob slowly turning, the hinges creaking before a frigid blast throws the door open to reveal, in the flesh, Chimpy!

ROTFL, Randal! You had me going there. I didn't see the Chimpy till the last line.

Now THAT would be a horror show. Of course, Dick Cheney would be even scarier - especially if he had his gun!

Yep, another car is definitely in order.


Your exchange with Randal had me laughing.

Now you have to perform a ritual to ward off evil spirits.

That is a pretty cabin & you will likely need a 4 wheel drive to get up that steep snowy hill.

If only money were no object & you could head to Hawaii in the winter.

Oh! By the way my last dog hated any clothes or anything on him..... but on the rare occasion it snowed, he would dance around like a little kid- but at first he would halfway step his paw down, like WTF is this & dang it's cold.

Cool pic! All that snow! Love Diva's coat. I can tell she's a girl because of how the coat wraps around. Our old girl dog had a similar red fleece coat, but our surviving male has a blue shell style that is completely open underneath. He hates it, keeps flipping his head around like that will get it off him.

The only time we ever lived in snow country, our first major purchase was a jeep cherokee 4WD. It was kind of a beast, but we never got stuck even up in the steepest hills.

Fran, I do fantasize about spending the winters in Hawaii, for sure! Maybe someday....

Dogs seem to get very playful in the snow, don't they!

DK, the flipping the head around thing is exactly what our old dog Alice used to do if we tried to put a coat on her. Diva just acts proud when we dress her up! We just got her a new purple coat because she'd torn the other one in a couple of places, and boy was she proud of herself when I put it on her tonight!

Glad to hear your Jeep Cherokee made it up the hills. I am looking forward to getting a Jeep so we can get up to our cabin in the winter!