Vick's Dogs Getting a Second Chance at Happiness 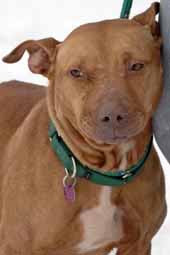 I'm taking a break from the political scene today to report some good news on the progress of the pit bulls rescued from Michael Vick's dog fighting enterprise.

According to the New York Times, 25 of the dogs are now in foster homes, and 22 remaining dogs are enjoying life at Best Friends Animal Society in Utah. Out of all of these dogs who had been so horrifically abused, only two were people-aggressive (one was euthanized and the other will live out her life at Best Friends). It just goes to show how wrong the stereotypes about pit bulls are, that the vast majority of these dogs are still able to be open and friendly to people.

After the cruelty suffered at the hands of Mr. Vick, who agreed to pay $928,073 for evaluation and care of the dogs, these dogs are finally getting the love and attention they deserve. According to the Times article,

"Here, they live in a 3,700-acre sanctuary that is covered by juniper trees and sagebrush, and surrounded by canyons and red-rock formations. They have food called Canine Caviar, squeaky toys, fluffy beds and four full-time caregivers. The caregiver on the night shift curls up with the dogs for naps."

The progress these dogs have made since being brought to Best Friends is phenomenal. Many started out wary and afraid, but now cover their caretakers' faces with kisses. Others still struggle with post-traumatic stress, such as Meryl, who is the one dog of all of the 22 dogs at Best Friends who is snappish with people, or Georgia, who has some neurotic habits such as barking at her kennel and rubbing her nose until it's raw.

"John Garcia, the assistant dog care manager of Dogtown, which houses about 500 dogs, said pit bulls that are withdrawn or aggressive toward humans break his heart because they are bred to be people-friendly. 'With most of these dogs, even Meryl, their actions are based on fear,' said Mr. Garcia, who communicates with the dogs in soothing baby talk. 'The biggest job we have with these guys is teaching them that it’s O.K. to trust people. It may take months or years, but we’re very stubborn. We won’t give up on them.'"

The picture at the top, which came from the Best Friends site, is of "Little Red," who may have been used as a bait dog for the fighting dogs. Her teeth were filed down and she has a lot of scars. It breaks my heart just to look at her, as she looks so much like our Diva; and interestingly, Diva's front fangs were filed down as well. We will never know any details of Diva's past, but it is clear she has been a lucky dog - as are these dogs, who were rescued from their sad fate.

BAD RAP of the San Francisco Bay Area, another organization involved in the care of the Vick dogs, also has information on their website about the dogs in their charge, which have all been put in foster care:

"The only difference between BAD RAP's 'Vick dogs' and the rest of the dogs in their foster care program is their celebrity. All are now living in volunteer foster homes with other pets and some, with children. Like other BAD RAP dogs, they're receiving basic obedience training and learning house manners. All are neutered and micro-chipped. All have different personalities. We can expect they will be well-mannered, good canine citizens that will blend right in with society. After escaping two certain deaths, they're now destined to be well loved family pets and they'll continue to help break down the stereotypes the breed has suffered."

Despite the payments by Vick, still more money is needed for the support of these dogs, so donations are welcome.
Posted by Mauigirl at 2/02/2008 03:15:00 PM

Thanks so much for posting about this (and for your support for my post over at my place). I hope that the media coverage these dogs are getting will help erode the misconceptions about pit bulls and maybe even diminish support for breed specific laws.

thanks for posting on this...I was sure that they would be put down- so good they get a 2nd chance...

this is great! brings tears to my eyes --- these dogs deserve a second chance --- they have done nothing but be trained to fight -- and it goes to show that love, care and kindness can really make a difference

Vick should be paying MUCH more.

i think Best Friends is one terrific organization -- one of my favorites.

pit bulls are some of the most loving and friendly dogs around.....

What dcap said. Especially about Vick paying more. I'd rather see him realize what he did and not just rot in jail for 20 years, but come out and have a chance to do good, but not even a million? The dude signed a monster deal with the Falcons. He's got money and it's not like he'll need it any time soon.

Hi Suzi, yes, let's hope this publicity will help the image of these wonderful dogs!

Enigma, yes, I was so afraid of that too; and if PETA and the Humane Society of the United States had had their way, they would have been. These supposedly humane organizations recommended they be euthanized. Blessings to Best Friends,BAD RAP, ASPCA, and others, for taking up their cause.

DCap, you are so right, the dogs are the true victims here and I'm so glad they're being given another chance. They really are the most loving and friendly dogs, as Diva will attest to!

Randal, you make a very good point - he really should have paid much more; to your point, he could have certainly afforded it.

This is such a great post. I hate what some people are capable of doing. I hope this example is one that reins on and teaches others we will not tolerate abuse on animals or our children. Any human things. Our world seems so full of pain..will we ever beat the bad guys or is it one small step and animal or child we save at a time?

Bless you for posting some positive information on this horrific situation. Best Friends and other wonderful animal rescue organizations all deserve our support for helping helpless animals. Thank you for your concern.

Mauigirl, will you please ask your mom to pass judgement on this question of grammar?

In a post I wrote "He was wading in quite deeply ..." then I asked in another post whether it should be deep or deeply. Commenters were divided. I would appreciate hearing what your mom thinks.

I am happy that you posted the follow up to this story.

Thank you for adding me to your blogroll, I have blogrolled you as well.

I came over from Fran's gracious blog, and I really like what I see! Glad to see that vick's dogs are getting a chance.

This makes me weep- these beautiful dogs, so often - as you know- vilified because of misconceptions.

I love Best Friends very much and once did a local home inspection for them in Nyack, for a pending adoption.

No such thing as a bad dog, but bad humans are a dime a dozen.

Thank goodness the dogs are getting a second chance and big atta boys to the people who are giving them that chance. Good Karma will be coming their way.

yes I too wish you good Karma, you deserve it. however, it's funny how I got here on a "baby-boomer" blog coming from an "anti-baby-bloomer" ranting blog!

I've given you a link out of interest in American politics this all-important year: visit me and see if you like to swap links as we did with the great Distributorcap above (whom I take this opportunity to salute!)

but really, as someone has just pointed out, it's not the innocent dogs, it's the imbecile humans :(

I read this article and was shocked at just how cruel the treatment had been. He really does deserve to be in jail.

I just read this had to come over here.

Vick should be forced to donate this bonus to animal rights causes like Best Friends.

This is great news. And I second the other comments that say Vick should pay whatever it takes. He has plenty of money and he isn't using it any time soon.

Thanks, everyone, for all the supportive comments.

Dorothy, you are so right. These are the things on which a society is measured.

Kitkat, thanks for your comment - I hope more people will be inspired to support animal rescue organizations as a result of this publicity.

Liz, I think the answer would be, are you wading deeply (in which case it is an adverb and takes the "ly") or are you wading to a deep level, in which case it wouldn't. I'm not sure which way is preferred given the meaning is similar. I'll see if I can dig into it more! And I'll ask my mother! BTW, I keep trying to get her to blog again; she's gotten busy with a lot of other things and has gotten out of the habit. Maybe soon!

Dr. Zaius, thanks so much for adding me to your blogroll!

Welcome to Diane and Miss Welby - I'll be stopping by your blogs as well, thanks for your comments!

Miss Welby, that's funny you were on an anti-baby boomer blog and found me! Thanks for linking me, I'll be happy to do the same.

POP, you are so right, it's the people that do the damage, not the dogs.

PunditMom, I know, it's so horrific when you read about the details.

Fran, that is heinous that he's allowed to keep that bonus. You and Tom are right, he should be paying even more.