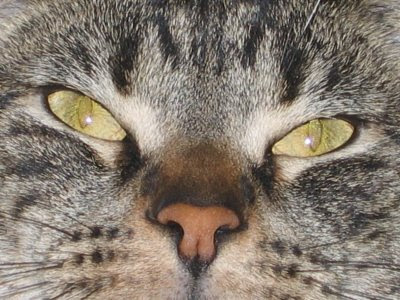 Baxter here. Since I got off schedule last week, my Female Human said I could switch my Blogging Day to Wednesdays. So here I am.

I have some News from the World of Animals so I thought I would start out with the good news that a Beagle has finally won "Best in Show" at the Westminster Dog Show. Now, I am no Fan of Dogs, but this one seemed as if he was pretty cute.

In News of the Bizarre, the Associated Press reports that a car driven by an Alaska State Trooper was nearly hit by a falling moose while driving along a highway in Alaska. Apparently it fell from a Cliff to its Death. Who knew Moose would be so clumsy? I can imagine that being hit by an Animal of that Size would not be pretty. Hope he made someone a good Meal. (And they better have shared it with their Cat. I'm sure one of my Relatives would enjoy it).

In other News, I see that that Baseball Player, Roger Clemens, is testifying before Congress about his use of some kind of Illicit Drugs called Steroids. Now, I am not a big Fan of Roger Clemens in the first place, but as a Cat who has been known to partake of Prednisone, a Steroid, from time to time for my skin problems, I am Curious (as Cats tend to be) why this is a matter to be pursued by Congress? If these so-called Steroid things are illegal, why don't the Powers That Be just indict Mr. Clemens on criminal charges, to be handled by the courts? What does Congress have to do with this Problem? It would seem to me that Congress might have Better Things to do with their time. But I'm only a Cat so what do I know?

The Political Scene continues to be lively. After the Obama Human's sweep of the Virginia, Maryland and Washington DC primaries, he is gaining Momentum. Interestingly, the former manager of ex-President Bill Clinton's 1992 campaign just endorsed Obama for President. The Hillary Human must be getting Nervous as a Long-Tailed Cat in a Room Full of Rocking Chairs, as they say.

My Female Human has asked me to end this Post now as she needs the Computer. So long for now, and enjoy your Catnip this week. I'll be back next Wednesday for another Roundup of the News.
Posted by Mauigirl at 2/13/2008 01:04:00 PM

Imagine calling in to the station, 'Uh, sarge, could you, er, send out a tow truck?'
'You broke down?'
'Sort of.'
'Sort of? you broke down or not?'
'Well,a moose fell on my car.'
'What have I told you bout drinking on the job, boy?'
(Okay I passed into hillbilly talk there but you get my drift?!)

LOL, good scenario, Liz! That would've been something!

I love that picture of Baxter!!!

Happy Valentines Day Baxter....give that owner of yours a bit of Attention- it is V-day after all...( there might be extra catnip)....

Uno is a honey. Perfect name for the first beagle to ever win best of show there.

I guess saying a moose fell on you is better than the dog ate my homework excuse.

DCup, I know, it's a great picture! I do need to get some new ones though so we can have variety!

Enigma, thanks, Baxter appreciates your Valentine's Day wishes. Baxter always gives us attention whenever he can. I'm sure he'll make a special effort today.

POP, you're right, it is a great name for the #1 Beagle! Love the idea of using that excuse...I think I'll try it next time I feel like staying home from work.

That was the cutest Beagle ever on Westiminster. I'm glad he won.

Just stopped by to wish Baxter and Mauigirl a very Happy Valentines Day. I hope Baxter gets an extra treat for all the hard work on this post. ;-)

Thank you, Mary Ellen, on behalf of Baxter and me! Happy Valentine's Day to you too!

I agree, that was a very cute Beagle!

Silly technical thing about baseball: as a part of baseball's anti-trust exemption, congress has the only oversight. So, only congress has jurisdiction to hold hearings; no court can. Yes, it's a goofy system.

Thank you, Pygalgia, you are the first person who ever explained that!

But what about the laws broken by the individuals involved? Is that subsumed under the umbrella of "baseball" and therefore they aren't liable for their individual lawbreaking?

Is Baxter voting for Obama?

There's a group called Cats4Obama forming and it's a safe distance from the Dogs4Obama group just up the road.

Christopher,
Yes, Baxter has decided to vote for Obama. We're not sure about Diva, but I'll ask her. She tends to like women better than men.

I'll tell Baxter to check out Cats 4Obama! Thanks for letting me know!

Baxter, if your Human will let you partake, I am inviting you to share Freida Bee's birthday cake over at my place. I think you'll find it right up your alley!

A bit disconcerting to open your blog and immediately get this close up of Baxter staring me down!

As Tommy's dog, I feel compelled to bark a comment of admiration at your typing skilz. It's never easy with pawz.

Just a technical point: prednisone is in a class of drugs called corticosteroids. Corticosteroids are a completely different class of drugs than anabolic steroids, which are the illegeal 'performance-enhancing' drugs Clemens is accused of having used. They're both 'steroids', but they're really quite different drugs, with different effects.

Suzi, I sent Baxter over to check out the cake - very appropriate!

Comrade Kevin, Baxter says you are so right about that.

Femail Doc, I know - it is a very Intimidating portrait, as Baxter likes to say.

Boo, thank Tommy for letting you post a Comment. I'd just like to say that we Cats have better Fine Motor Control than Dogs so that is why I Type better.
-Baxter

Satan, thanks for the clarification about the differences between anabolic steroids and corticosteroids. Baxter is a very smart cat but he's not an expert in these things so I'm glad you set it straight for any readers who might be confused by this.
-Mauigirl

Maybe if my Beagle-Bassett Hound was still alive, he would have stood a chance.

Wonderful, Baxter. I love to read what other kitty cat bloggers write.

Baxter, the next time tour female human wants to curtail your computer use, remind her that the superior species must have precedence and tall her to wait! ;-)