I keep noticing an "AdSense" ad for "Blue Pit Bull." I hope to heaven my blog is not advertising for some pit bull breeder that is breeding them for the wrong reasons. I am not allowed to click on my own ads (AdSense rule) so I can't follow up on it to find out. So if anyone is following that ad please let me know if it is a legitimate site, or whether it is advertising pit bulls that are huge, called "game," or in any way implied to be fighting dogs.

I am supportive of knowledgeable breeders breeding good pit bulls that have excellent temperaments, which is their natural personality. The pit bull has been bred historically to be good with people, and was once "America's Dog" back in the mid-20th century. It is only in recent years that unscrupulous people and back-yard breeders have been breeding dogs that are aggressive to people. These are the breeders we need to put out of business so that the pit bull breed regains its deservedly good image. 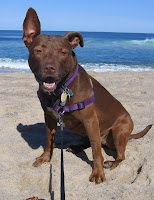 My dog has the greatest temperament - she passes every temperament test, she has her Canine Good Citizen Certificate, and probably could get her Therapy Dog certification if I worked at it. She is the only dog I've ever seen that actually wags at passing cars. And if she sees a stranger walking toward her on the street, the tail immediately starts going and she is disappointed if she isn't able to greet them personally.

This whole issue was brought to mind by the fact that our local newspaper's website had a poll today asking "What do you think of pit bull dogs as pets?" with answers like: "They scare me," "They should be banned from neighborhoods with kids," "They make fantastic guards for your house" (they don't, actually - they're too friendly); and finally "They're just lovable K-9's."

First of all, why post this poll in the first place? There have been no incidents that I am aware of in our area in recent weeks that would prompt such a poll. It's just catering to media hype. Why not have a poll about German Shepherds? Or ferrets? Or wild animals? Why pit bulls? Because pit bulls are all any newspaper ever wants to talk about. If there is a dog attack, it always mentions if it's a pit bull (and who knows how many really are actually pit bulls; often it turns out the dog is not a pit bull). But if it's some other kind of dog, breed is seldom mentioned. That is why I question if the statistics they have are even accurate since many people don't even know what breed of dog they're talking about when they call something a "pit bull."

Can YOU find the pit bull in this group?

I got it....but only at the 5th attempt. Won't give it away here. But I find it incredible that there are so many breeds that I've never even heard of. That one thyat's described as a boxer, for instance: I can't believe it!
Unfortunately, the bad press had really got its message across. helped by the fact that is apparently so cool for brainless aggressives to parade around their neighbourhoods posing with their 'killer' rottweilers & pit- bulls, off the leash & no muzzle, when they can get away with it. And it is also true that some truly horrific cases of maulings to death still occur across Europe, despite the legal restrictions. 4 weeks ago, a Ukrainian woman came out of the house in Sintra where she was a maid and promptly got attacked and killed by the next-soor neighbour's 4 rottweilers, no previous history of violence. So people are scared. On the other hand, I know people who have thm who swear that are well- raised and docile! Training & responsible owners must be the key. Breeding them to fight is obscene.

You are right, there are a lot of breeds in this group that are obscure; some are probably imports from other countries. The boxer is a very common breed here in the U.S. but the one in the picture isn't the color we usually see them in.

There are definitely people who are using these dogs for bad purposes and like to show off how tough they are. And of course no dog should ever be off the leash.

Training and responsible owners is definitely the answer. One of the big problems with dog attacks here is, the authorities aren't enforcing existing laws that require dogs be on a leash. We also already have "dangerous dog" laws that would apply to any pit bulls or Rottweilers that are in that category. No need for breed specific laws. It's enforcement and education that is needed.

So sorry to hear about the woman in Sintra. It's a shame, because I know so many Rottweilers that are absolute pussycats and gentle and loving.

It seems like every other week there is another story of a pit bull mauling. Yes, we can put a LOT of blame on the owners but I have to admit - I'm against the breed.