Mirror, Mirror on the Wall...

I'm not sure of the origin of this saying, but it is so true.

Is it like this for everyone? When you're young you swear you're never going to be ANYTHING like your mother. Nope, won't happen. Then gradually, the older you get, the more you realize you are EXACTLY like your mother. How does this metamorphosis occur?

When I was young, if I went to the mall with my mother I told her to walk 10 paces ahead of me so no one would know we're together. Heck, she wore what we called "pedal pushers," when no one else wore them, she wore tops that didn't tuck in, and elasticized waistbands...it was SO embarrassing.

Now I wear the exact same things. Except they call the pedal pushers Capris or crops now. And they're in style...for now. But I know, just like my mother, I will continue to wear them in the summer even when they're not in style. Because I wouldn't dare go out in public wearing shorts now with the legs I've got!

My mother was a Journalism major in college and went into medical writing as her career, at least until she had me and stopped working. I too majored in Journalism but by then they called it Communications. I never went into writing, I ended up in another field. But now after almost 30 years at the Big Corporation, I'm realizing that medical writing would have been perfect for me, with my fascination for all things medical. I may end up doing that yet.

When I was young I never thought my mother and I looked or acted anything alike. Now when people I know meet my mother the first thing they always say is "You look SO much alike!" I don't think it's the look so much. It's how we act. It's like in the old Patty Duke Show..."They laugh alike, they walk alike, at times they even talk alike" - it's about the mannerisms more than the actual resemblance. (Of course, in their case, they really were alike - they were both Patty Duke). 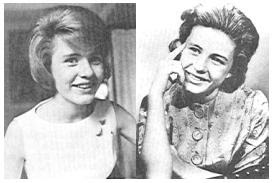 I find I let out a big sigh when I sit down in a chair, just like my mother. And, I have adopted her habit of saying "Oh, Lord," when something is just too much for me, including when I get up OUT of the chair. Just like my mother.

Mannerisms are one thing. But my other personality traits are getting more and more like hers as well.

My mother is not a morning person. She stays up till all hours reading and then sleeps till 11:30 or so in the morning. And she can't function unless she relaxes over her breakfast and coffee with her newspaper in the morning. And, my mother is always late for things. I have many memories of Sunday mornings when my father would be pacing impatiently with his overcoat on, waiting for my mother to go to church, and she was sitting there with her coffee, finishing her morning cigarette, saying "We have plenty of time." Of course they would always be a couple of minutes late.

When I first started working at the Big Corporation we had to be there at 8:15 sharp. I was always a couple of minutes late but at least I managed to get there within a minute or two. In order to accomplish this I usually slept till the last minute, took a quick shower, threw on my clothes, and bolted out the door, driving to work like a maniac.

Gradually over the years my lateness worsened. Luckily the standards relaxed as well. They developed a 3-tiered flex time where the latest schedule began at 8:45. That helped. Then I started slipping further and arriving later than 8:45. Later still I found it ruined my morning if I didn't sit and relax over my coffee with the newspaper, so I began taking longer and longer to get out of the house. Now my standards have slipped completely. I wander in any time after 9:30 but sometimes it's more like 10 after 10. I do work late and make up for it but I can't help realizing that I am more like my mother every day in this regard. Some day I may not be able to leave the house at all until 3 p.m., as is the case for my mother now!

My mother never worries about anything ahead of time; she knows how to roll with the punches. In this way I hope to be more like her, as I think it is the secret to her health and longevity. At 88, a pack-a-day smoker who never exercises, she still has normal blood pressure, takes no medications other than eyedrops for glaucoma, and is enjoying her life. My aunt, her sister, is the worrier in the family. Even though she doesn't smoke and exercised a lot more than my mother (she walked extensively up until a year or two ago) she is the one with heart trouble, insomnia, stomach problems, and she has had a couple of mini strokes.

Right now I'm more like my aunt when it comes to worrying about things, and have the high blood pressure to go with it. But if past performance is any indicator, the older I get the more like my mother I will become. So let's hope my metamorphasis continues until I am her clone in every way!
Posted by Mauigirl at 4/11/2007 11:07:00 PM

Oh, I'm late for everything too! Husband likes to be on time or preferably early so this causes some tension. I too am getting later and later at starting work.

Everyone says I look like my mum but she died when I was 18 and before I really got to know her so I don't know about mannerisms or anything else. I think I'm becoming more and more like Marge Simpson!! I make those little sort of grunty noises in my throat that she does.

LOL, I think I do that too!

I also realized tonight that I now am leaving my purse unzipped half the time, just as my mother always does. I was always scolding her for leaving her purse open and now I do it too.

When I hear our girls talkng to their children I realise they are turning into me!!!

Excellent post! BTW, wanna do a link exchange? Mahalo Nui Loa for your comments! Have a blest weekend!

Definitely, thanks, Kuanyin. I'll add your link to my list!

Mine you can see if you check my profile, would love to be listed on your blog, thanks so much!