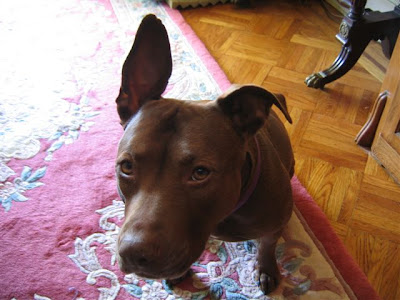 I have to admit, my dog is a brat. She is aptly named "Diva." When she wants something, she barks. Loudly. Incessantly. Irritatingly. Until I am driven to desperation and just try to appease her, give her a biscuit, a Greenie...anything to get her to stop.

I realize this is not the thing to do. I realize I am actually training her to continue the behavior. But I end up doing it anyway.

So she is now a fully developed brat. Or diva. Whatever you want to call her.

Tonight we had a couple of friends over to plan a park cleanup we're holding in early May. Diva had been peacefully sleeping on the couch when they arrived. She adores them, so her excitement level immediately increased tenfold.

After lots of licking of faces and running about, she sat at their feet and accepted further homage and ear-scratching. But of course that is never enough for a Diva. She then decided they should play ball with her and proudly brought them her slimy dog-spit covered blue Jolly ball. They patiently threw it for her for about five minutes, but then it was time to get down to the reason we had met so they tried to stop. This did not go over well with Diva because she wasn't done playing with the ball. (She is never done playing with the ball).

So she started the Demand Bark. Bark, bark bark. (Patient friend then throws ball). She then stands in front of the ball barking some more. Bark, bark, bark.

I said to DH, "Do something. Go lock her in the upstairs bedroom."

Of course, she wasn't. She continued the barking periodically for the rest of the time they were there. (It's just lucky they love dogs.)

After they left I thought she would calm down, but no. She was all excited that people had come to see her (as she perceived it) and she was not yet ready to calm down. Bark, bark, bark. More barking. I was trying to get dinner ready, so I gave her a Greenie to occupy her (continuing her training as a Diva).

In the meantime I got the potatoes into the microwave, got the steaks ready to grill (a little Worcestershire and garlic powder), and made the salad.

DH was on the sunporch on his computer. I went to tell him he could now take the steaks out and put them on the grill, then went upstairs for a minute to get something.

When I got downstairs, DH was still on the sunporch and I heard a strange noise emanating from the dining room. Kind of a crunching noise. I looked in the kitchen at the counter at the steaks on the plate that was not far from the edge of the countertop. But it wasn't "steaks." It was "steak." A steak was missing. Crunch, crunch. Omigod, the dog had stolen the steak!

I ran into the dining room and turned on the light, and there she was. Hunkered down happily on the dining room rug, crunching up the bone that was all that was left of a lovely piece of organic, grass fed, having received no hormones...Porterhouse steak.

I grabbed the remnant of bone out of her throat. Luckily she really didn't eat a lot of the bone itself. I momentarily pondered whether this latest dietary indiscretion would be bad for her, but figured raw organic steak wouldn't hurt her. After all, that's what wolves eat, basically. So I decided not to bother to make my usual call to the Emergency Veterinary Clinic (I think they recognize my voice by now) to ask if having consumed a nearly one-pound Porterhouse steak and part of its bone would be a problem for a pit bull with very large jaws.

I informed DH that if he had taken the steaks out onto the grill when I'd mentioned it, this would not have occurred. We won't get into the ensuing discussion.

In the end, we just split the remaining steak, which turned out to be fine, since, let's face it, if we were paying attention to what I've learned in Weight Watchers regarding serving sizes of meat ("the size of a deck of cards"), that one Porterhouse steak was plenty for two people.

I guess I should just thank Diva for helping me out with my portion control issues.

(For anyone who is concerned about Diva's well-being, she is now sleeping the sleep of an extremely satisfied, tired dog - with no repercussions from her gluttony).
Posted by Mauigirl at 4/18/2007 10:41:00 PM

Oh naughty husband! Now if he had done as requested ...
I can imagine your conversation!

When we have visitors we usually reach the point of having to shut Harvey out of the room as he is insisting on being scratched or slobbering over their clothes but it's only been in recent years that he has barked incessantly.
He can spend a good part of the day, lying on his bed, barking for no reason. Having water thrown in his face usually shuts him up but only Husband is hard-hearted enough to do that. I have learned to shut out the noise in my head.

This is my first visit here, but I will be back soon, because I really like the way you are writing, it is so simple and honest