There is certainly a lot going on this week. I just heard the news that Arlen Specter has switched parties - becoming the 59th Democratic seat in the Senate. He is facing re-election in Pennsylvania this year and decided to run as a Democrat.

On one hand, this is good news for the Democrats, because if Al Franken finally wins in Minnesota, the Democrats could have a filibuster-proof majority of 60. (Assuming all 60 agree on the issue at hand, of course, which isn't always the case).

On the other hand, it is a sad day for the so-called Grand Old Party. That leaves even fewer moderate Republicans in the party, concentrating it even more into the hands of the far right. If anyone was hoping for less partisan rancor, it just isn't going to happen.

Of course the other big news right now is the swine flu, which may become a pandemic. Fears that it might be as bad as the 1918 pandemic that killed so many people are probably exaggerated. However, any time there is a new strain of flu that the vaccines can't prevent, it is a big concern. If you want to check out how many cases are in your area, here is a link to an interactive map.

President Obama is about to hit his first 100 days in office so be prepared for yet more analysis of "How's he doin'?" (as NY Mayor Ed Koch used to ask people about himself). As the linked article points out, most of the time the first 100 days don't really serve as a real indicator of the mettle of the President in question. Only Roosevelt accomplished a huge amount in his first 100 days - which would probably not be possible in modern times, since our modern Congress just doesn't do things that fast.

In a stunt of remarkable stupidity and insensitivity, one of the planes used as Air Force One made some low circles over the Statue of Liberty with an F-16 escorting it on Monday - just to provide a photo of the plane juxtaposed with the statue. Governor Corzine said that New Jersey was not notified of the plans and that it was "unacceptable."

Mayor Bloomberg's office was supposedly notified - but the word had not gotten out even to the Mayor, so he was furious about the incident, which caused workers in high-rise buildings to flee them in panic, thinking it was a reprise of September 11.

President Obama had nothing to do with the incident and was reportedly "furious" also.

But it isn't even a matter of notification - it's more like, "WTF WERE THEY THINKING?" How could anyone think this was a good idea given that New York's memories of 9/11 are like a raw wound that is just barely scabbing over? How could they even consider doing such a thing? I hope someone gets fired over this. 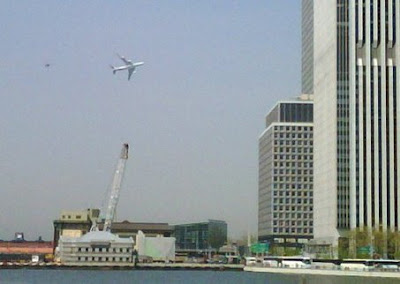 What a wild week. And it's only Tuesday.

I believe Obama has accomplished more than most in his first 100 days. Holy granola, look at the mess left for him on January 21st. Face it - the GOP has put a brick wall in front of him (as best they can), and he still carries through. Kudos from me. I do think I would fire the imbecile who arranged for the photo-op of Air Force One with the Statue of Liberty. that was plain inexcusable.

Not sure what to think about Spector, Someone said he had been a Democrat before.. so I guess he is switching back...lol

If he would vote with the Dems more often it would be great.. but not sure he will.

As for the flu, I think it is getting blown out of proportion, so far it doesn't seem that bad in the US and hopefully it won't be that bad.

Pres. Obama I think is doing well, for the most part. His ratings are still very high, higher than anyone else according to some polls and that's a good thing. And that plane stunt.. I am not sure what to think of that.. someone had their head up their butt and wasn't thinking of anything. I am not sure what else to think... just stupidity. I guess the NYPD knew about it..but they neglected to tell the mayor or the Gov's or anyone else..

The swine flu outbreak is chilling and I hope it doesn't become a full-on global pandemic.

A full-scale pandemic could claim the lives of about 2 percent of those infected, or about 2 million Americans.

This is what the Federal government is preparing for:

• 90 million Americans sickened or about 30 percent of the population
• 1.5 million would need intensive care
• 750,000 would need the help of mechanical ventilators to breath
• Hospitals overwhelmed
• People would be isolated and their relatives could be quarantined
• Schools closed
• An economic recovery snuffed out
• Food and water shortages
• Hotels, restaurants and airline business grinds to a halt
• Empty seats at baseball stadiums and houses of worship

Homeland Security Secretary Janet Napolitano said on Monday that the U.S. is preparing as if the swine flu outbreak were a full pandemic. It is not at that stage and may never reach it.

Even if the new swine flu from Mexico turns out to be especially aggressive, the worst consequences could be averted.

The only good news is the swine flu outbreak is happening with President Obama in the White House. Imagine how much worse it would if this happened when the Motherfucker from Midland was president?

You make an excellent point about what Specter's departure means for the GOP. I briefly read a snippet earlier about Republican Olympia Snowe saying that there is just no room for moderates in the party. I'm not exactly a fan of Specter, and we'll have to wait and see how he'll do as a Democrat. But his move is really indicative of how the Republicans are moving even more to the right. They want nothing to do with moderates or bipartisanship. No matter how much they publicly snipe at each other, Limbaugh and Gingrich have the same strategy - move to the right.

A Franken-- He's good enough, smart enough, and dog gonnit, people voted for him! (ab)Norm(al) Coleman really needs to give it up already.
He cares so much about himself winning, he is willing to let the State not be represented in the Senate?
Release the angry villagers with torches & pitchforks.... I would think the people of Minnesota would be pressuring him to wrap it up already.
He will win awards for Sore Loser- 2 years in a row!


I've been fully immersed in the swine flu topic as I work in the travel industry. My employer dragged their heels about suspending visiting Mexican ports of call. People were furious & I played the role of messenger.
The 152 deaths in Mexico is serious stuff, but today I see the first confirmed US swine flu death in the news today & they are waiting for results for another in California. That changes everything.

I don't want to be in a panic over it, but take it very seriously.
The local health dept. said this is a new strain so no one has immunity to it. It is a cross between swine & avian strains of flu-- a hybrid if you will. Apparently the weird twist to is is it has been fatal in healthy people-- because it makes the immune system kick into overdrive & that makes it deadly.

Sure hope careful precautions prevent it from doing mass damage.

The only time these 60 "Dems" will agree on anything is to add Neapolitan to the cafeteria menu. ;-)

I wonder if this means that the Republican party as it current exists will survive. As it stands now, it's a regional, southern party and comprised completely of the conservative base. That's it.

The Air Force One stunt was just plain stupid. This one will get at least as much mileage with the conservative talkers as Clinton's haircut did. The left does not need to give the shouters more ammo, it needs to prove them wrong, show them for the alarmists they are... not give them more fodder for their insipid talking points!

I'm so sick of the rush to "grade" Obama. Get some historical perspective, people. It's much too soon to have a clue how he's doing. (I'm not directing this at you but at all the TV and Internet commentary.)

Thanks for all the comments,sorry I didn't have a chance this week to respond individually!

The Michele Bachman thing was SO ridiculous - and she wasn't even right, the swine flu in '76 happened under Ford, not Carter. What a moron. Will somebody please vote her out of office already? How did she ever get elected in Minnesota?

Good question seemed like an average week to me stocks are doing better I'm now looking forward to receiving my envelop referred to as the 401 K....