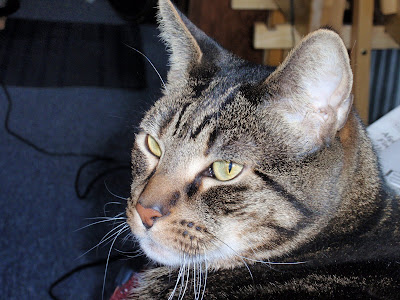 Baxter here, back for another Weekly Roundup of the news. As you see above, this is yet another New Picture of Me. Hope you like it.

Well, my Female Human has found yet Another Distraction: Blip. It's like Twitter but with Music. You can just upload songs All Day Long. And post them on Twitter. There is No End to this Sort of Thing.

It was finally Springlike today and That Dog spent a Lot of Time Outside, which was great for Me because I got to curl up next to the Male Human and enjoy some Companionship for a change, without being Bothered. Then for awhile all of Them were Outside and I got the House to Myself and had plenty of Time to Surf the Internet for News. So without Further Ado, here is my Weekly Roundup:

In international News, North Korea launched some kind of Rocket to show the Rest of the World how Powerful they are getting; but it kind of Fizzled. After all the Hype, the thing just went down in the Pacific. But it is still a Grave Threat since North Korea has Nukes and who knows when they may be able to reach Us? Something Must be Done.

Interestingly, President Obama got the proverbial 3 a.m. phone call about the Launch of the Missile; except it was at 4:30 a.m. Close Enough.

Those who doubt the Reality of Climate Change should be Aware that a big Chunk of Antarctica is about to Fall into the Sea. The Ice Shelf lost about 14% of its Mass last year, and has been melting since the 1990s. In a Somewhat-Related Development, the Obama Administration is working to Limit the size of Cruise Ships that tour Antarctica in order to Protect the Environment.

Global Warming is also Endangering a cute little Furry Creature called the Pika. These Pika things can't live in Hot Weather and their Habitat is getting Warmer, which is Bad News for Them. Of course, as a Cat, I look at a Pika as something Good to Eat. But being an Indoor Cat, I will never have a Chance to Eat one. They are probably going to put it on the Endangered Species List. Here is a Picture of one of the Little Fellows: 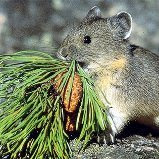 Here at Home, it has not been a Good Week in General. In Binghamton, NY, a Man gunned down 13 People in a Civic Association, while in Pittsburgh, another Man killed 3 Police Officers in a shootout. And those NRA People still think it's a Good Idea to have Guns? Please!

In More Positive News, the President and First Lady have been making a Tour of it in Europe, meeting the Royal Family, greeting Youthful Supporters, meeting other World Leaders at the G20 Meeting, and More. Michelle's Wardrobe was a Topic of Much Discussion in addition to the Political Stuff. It seems to have been a Successful Trip so far, which is a Good Thing.

And of course, the Best News of the Week was the Decision by Iowa's Supreme Court that legalized Gay Marriage. Marriages will begin as soon as April 24th. And more Good News - this Newly Won Right won't go away anytime soon:

"The county attorney who defended the law said he would not seek a rehearing. The only recourse for opponents appeared to be a constitutional amendment, which couldn't get on the ballot until 2012 at the earliest."

Now, you wouldn't think a Cat would be that Concerned about the Marriage Customs of Humans. But we Cats are very strongly Independent and believe in being Allowed to do Whatever We Want. And we feel that All Humans should have the Same Rights to do what they Want.

With that, I will Sign Off, and wish all of you Humans out there, and your Cats (and I suppose, your Dogs) a Very Good Week. I hear the Weather is going to be Cold and Rainy again on Tuesday. Have some Catnip and try to get through it. Spring will be here for Good sooner or later!

Well done Baxter.. I can always depend on you for a good wrap up of the weekly news.

Thanks for the insight and will look for you next week.

The Binghamton, NY slaughter is yet another example of why firearms don't have a place in our society.

Despite what NRA Queen, Sen. Kristin Gillibrand (D-NY), who replaced Hillary Clinton in the senate, may think.

The portrait of this gun nut and loner, is an all-too familiar mix of what happens when an unstable loon has unfettered access to guns.

Baxter you are so intuitive. The gun issues are out of control. And considering BOTH shooters had body armor on - premeditation is involved. I hate to see the taxpayers money wasted on giving the Pittsburgh idiot a trial - he should plead guilty and go directly to prison. See ya next week Bax!!

Hi Baxter
Glad you got some alone time! Been a hell of a week huh? To me the most destructive part of that launch was the people were told it was successful and now they can listen to patriotic songs for space.

They are never told the truth. In the regard I am thinking we are no different. That is why the world is in trouble! We are all brain washed in one respect or the other.

Contrary to what the Republicans say, I feel a lot safer, not less safe now that the White House is under new management.

blip is fun but then again, I like music.

Oh Baxter, will you never make peace with that dog? I fear for world peace if you don't!

Sometimes it feels like things are really going insane. With all the stress people are feeling, I suppose it's no wonder that violence seems to be on the increase.

Still, it's very sad commentary on our human condition, isn't it, Baxter?

What a great roundup, Baxter. The Iowa decision was good news, wasn't it? The increase in violence lately frightens me though.

Have a good week, and give my love to your human and that dog.